Time after time, black freedom of expression gets spun into something very different by the law and the media 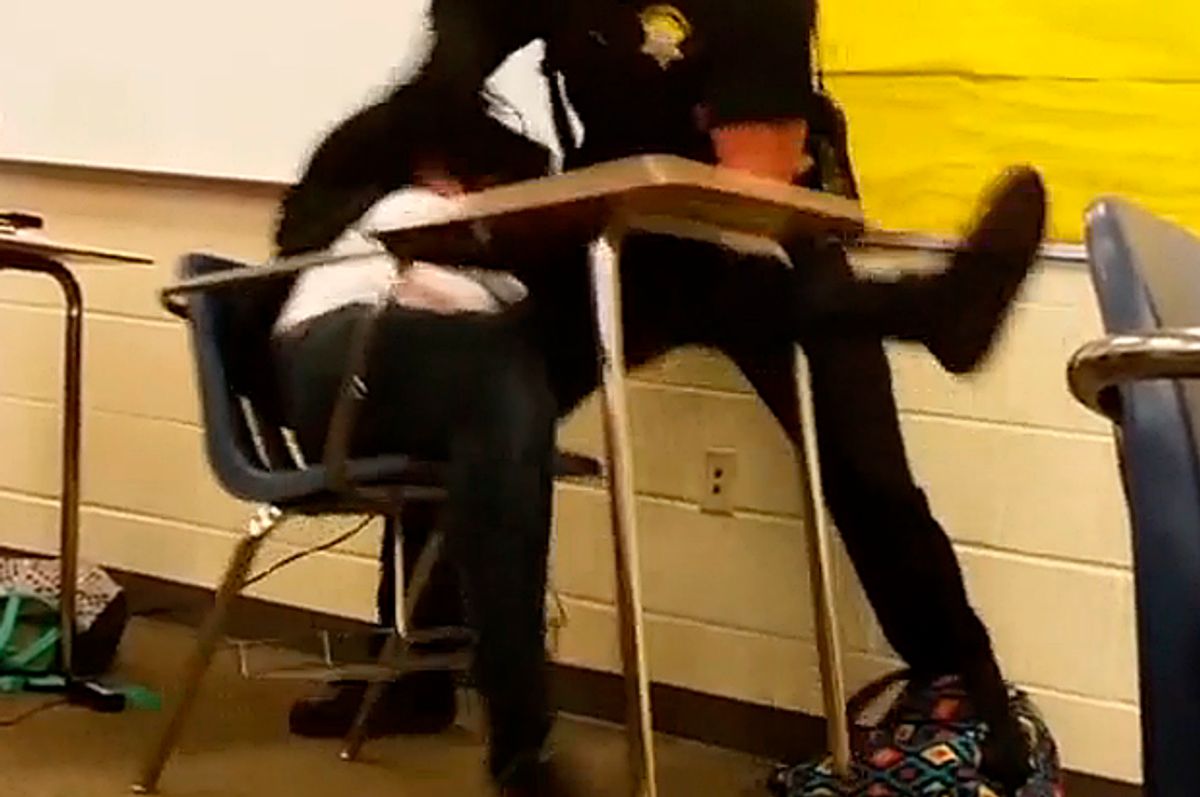 A still from a video of a school police officer in Columbia, South Carolina, Oct. 2015
--

In 2011, high school senior Taylor Bell, a local rapper in Itawamba County, Mississippi, made a song in support of several female classmates who claimed they had been inappropriately touched and subjected to harassing comments by two male coaches. In Bell’s song, he rapped: “Looking down girls’ shirts / drool running down your mouth / Going to get a pistol down your mouth.” For these remarks, school officials accused Bell of harassment and intimidation. He was suspended and sent to another school. In the next few weeks, the Supreme Court will decide whether to hear the case of Bell v. Itawamba County School Board.

In these days of school shootings, I understand the desire to take threats to students and staff on school grounds seriously. But I wish that the urgency with which these officials moved to discipline this young man had been applied to the school officials who created a hostile learning environment for black female students. It is remarkable that school officials took Bell's song, which sounds like an obvious attempt at blowing off steam, as a credible threat meriting immediate attention, while at the same time they took the concerns of the young women in their school who reported harassment and assault as something less than serious.

A group of rappers including Killer Mike, T.I. and Toni Blackman have come together to file a brief in support of Bell, urging the Supreme Court to hear the case and to defend the right of artists to freely express their thoughts through song, without having their words reflexively interpreted as threats.

The U.S. court system has a dubious history of protecting freedom of expression in hip-hop. In 1989, 2 Live Crew’s album “As Nasty as They Wanna Be” became the first album to be deemed legally obscene. Though this decision was later overturned, it is the reason we have explicit advisory labels on rap albums today.

That Bell used profanity and violence in a rap song to defend women against sexual violence is only one of many ironies here. The school believed that a young man would shoot two adults over rape threats. But violence over such offenses, while not necessarily without precedent, would be far more plausible in a world where women’s right to bodily autonomy was deemed sacred enough to merit such extreme tactics. To be clear, I don't condone the taking of lives or use of violence to defend political causes. But the defense of women's right to choose and to be safe from rape is never the thing that causes the violence in the first place. That kind of violence, which these school officials claimed to fear, only has social precedent when used against women’s right to bodily autonomy in matters of parenting and the right to choose -- or, as in the case of the Santa Barbara shooting in 2014, in order to punish women for whom they do and don’t choose to love or date.

The 5th Circuit Court of Appeals is located in New Orleans. Just 35 miles away from New Orleans in Slidell, Louisiana, seven young black female players on the Salmen High School basketball team refused to play a game in November after all came forward accusing their coach of inappropriate touching. The school took no action against the coach. Instead, all the young women were suspended from the team. Earlier this month, the school issued a statement standing by their decision to support the coach.

The safety of our schools for young women, particularly young women of color, is a long-standing, structural problem. Not only are the attempts to call attention to sexual violence in schools frequently not taken seriously; when black students actively protest this violence, they are often the subjects of severe disciplinary measures. Niya Kenney, the young black woman who spoke up when a school resource officer violently dragged and hurled her classmate across a South Carolina classroom -- an episode which has since become a widely distributed, much-discussed and extremely disturbing viral video -- now faces 30 days in jail, simply for yelling “what the fuck?” at the officer who disrupted her class.

Much of this case, if the Supreme Court chooses to hear it, will focus on whether students have the right to use incendiary speech in off-campus venues. Increasingly, courts have limited students' free speech rights, so that, for instance, actual threats made on social media about school might be taken seriously. But what we need to be talking about is how to legally support students who point out serious safety issues in their own schools, and how to protect them from the reprisal of school officials and the criminal justice system.

In Taylor Bell’s case, the speech did not constitute an actual threat. He neither intended to, nor ever did in fact, act in a manner that suggested that he wanted to do actual harm to the coaches. He used the provocative aesthetics that hip-hop is known for in order to offer a critique of structural and state-sanctioned violence against young women in his community. In this regard, his song is no different from NWA’s “Fuck Tha Police.”

Part of the challenge of trying to create laws that apply to everyone in a system where there is rampant racism, classism and stark differentials of power is that race-neutral law cannot, by its very nature, acknowledge that an exceedingly small number of the mass shootings on school campuses were committed by young black people. Typically, though not in all cases, the shooters have been white males. Yes, I think the law should be race-neutral. The problem is that in America, “neutrality” is typically defined as “pro-white.”

Moreover, our race-neutral conversations about freedom of expression cannot adequately account for the right of black people to express rage about systemic injustice in the public square.

For instance, in rapper J.Cole’s currently popular song, “No Role Modelz,” he raps, “fool me one time shame on you / fool me twice can’t put the blame on you / fool me three times, fuck the peace signs / load the chopper, let it rain on you.” This song issues a threat of violence against anyone who has the audacity to repeatedly mistreat the rapper’s persona in the song.

The only difference between J.Cole saying “load the chopper, let it rain on you,” and Bell’s “gone get a pistol down ya mouth,” is that Bell makes his rage context-specific. But the song is explicitly meant to call out the Itawamba faculty and administration for repeatedly ignoring acts of sexual harassment, particularly as the song suggests, targeted at young black girls.

In light of recent conversations about the relationship between racism and freedom of expression, and especially after the incidents at Mizzou earlier this year, it seems that we need to recognize that it is not black students who want to curtail freedom of expression. They keep using the power of protest and peaceful assembly as a form of expression to call attention to the variety of ways that their schools and public environments are made unsafe by those charged with their care and protection.

Hip-hop music has become a safe haven for the expression of rage -- black male rage in particular. One of the biggest hip-hop stories of the year has been the beef between rappers Drake and Meek Mill over a series of public comments from Mill and a pair of diss records in response from Drake. Rappers talk shit about the things and people that make them mad in their music. On one of the apps that I listen to frequently, there is a whole playlist called “Belligerent Rap Music,” and it is full of violent posturing, gun sounds and threats.

I listen to this playlist any time I am feeling stressed out about the racist and sexist microaggressions that I experience, but to which I cannot respond. I let the songs do it for me. And while I might like to fantasize about “busting somebody’s head to the white meat,” in real life, I would in fact like everyone’s heads to remain intact.

Curtailing freedom of expression will not curtail black rage, no matter how hard some would try. And, at the very same time, the hesitancy that many in media have felt about black activists calling for media-free safe zones on campuses and stricter punishments for students who wear racially offensive costumes suggests that there is a tacit agreement that white rage should not be curtailed through the mechanism of freedom of expression.

Therein lies the rub: Many of these arguments of late have unfairly directed the outrage over potential free-speech infringements at the actions of black students, as though they have the structural power to take away this freedom from white students and white people more generally. But, in actuality, it is black students who are being suspended, subjected to the school-to-prison pipeline and otherwise regulated because of the creative and radical ways they use freedom of speech to call out injustice.

Freedom of speech -- and the protection of it in ways that serve all citizens -- seems like a complex issue. But these recent cases against black youth suggest that, in the end, it may be as black and white as it ever was.