Camille Cosby's denial: How long can she continue to stand by her man?

Bill Cosby's wife has to give a deposition for the civil case against him, but don't expect her to say much 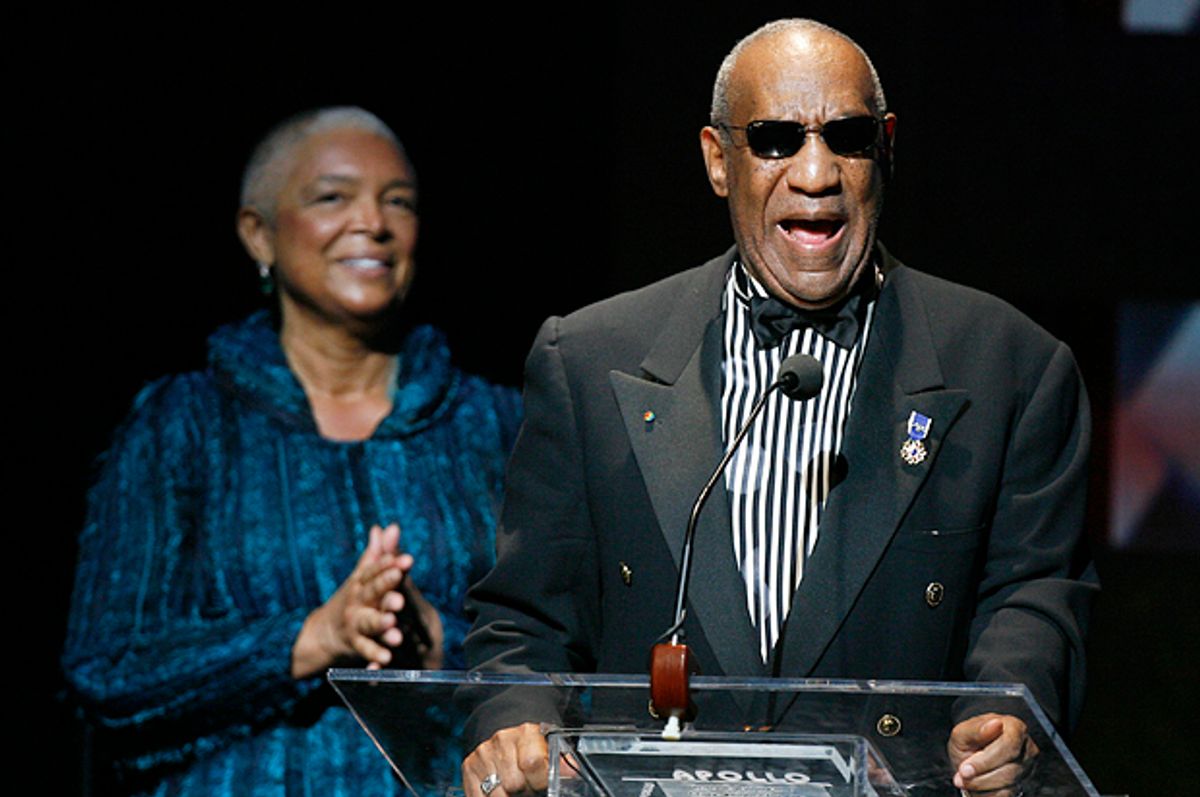 For decades, Camille Cosby has stalwartly stood by her man, no matter how loud the whispers about his extracurricular activities have been. Even over the past year, as a deluge of women came forward to say that her husband sexually assaulted them, she's been in his corner. Now this week, as she prepares to give a deposition in the defamation lawsuit that seven women have filed against him, she's likely rehearsing with her attorneys a series of statements that will support Bill Cosby's contention that he is a good man who has been wronged by a slew of duplicitous females. But my God, you've got to wonder what she really believes about who her husband of more than fifty years is.

The Associated Press reports that late last week a federal judge shot down Mrs. Cosby's motion to excuse a subpoena to give a deposition in the defamation lawsuit that seven of Mr. Cosby's accusers have filed against him in Massachusetts. She is set to appear for the deposition on Wednesday.

Mrs. Cosby's attorneys had argued that she was exempt thanks to the state's marital disqualification law, and claimed her deposition would cause an "undue burden." But in his ruling, U.S. Judge Magistrate David Hennessey countered that Cosby's qualms "do not outweigh the potential significance of Mrs. Cosby's testimony, nor has Mrs. Cosby provided any authority that they do." A lawyer for the women claims that Mrs. Cosby has "information that's relevant to the litigation in this matter."

The Cosby saga has of late become especially complex, as longstanding rumors have evolved into an impossible to ignore groundswell. In July, 35 of Cosby's accusers appeared on the cover of New York magazine to tell their stories. There have now been more than fifty who have come forward, with stories of being drugged and abused, spanning decades. More recently, seven of his accusers have joined forces to sue the comedian for defamation based on statements Cosby and his representatives have made regarding their claims. In November, attorney Joseph Cammarata issued a statement that "These people were held up to public ridicule and a character assassination when they came forward to tell their story of abuse or assault at the hands of Mr. Cosby. This is their opportunity to have their day in court and to attempt to restore their good name and reputation." Team Cosby has responded with a countersuit, claiming the women have damaged his "honorable legacy and reputation." Then late last month, a warrant was issued in Pennsylvania for Cosby, where he is being charged with aggravated indecent assault in connection with a 2004 incident involving former Temple University employee Andrea Constand. Cosby is currently out on $1 million bail.

Over the past few days, gossip over how Cosby's wife has been handling it all have been intense. A "close family source" told the Post's Page Six that she says, "My husband doesn’t deserve jail, but he does deserve every bit of the hell he’s going through now even though he is still pretending that this hell doesn’t exist…. She has been thoroughly humiliated and believe me, her anger isn't directed at the women. Bill has humiliated her, and the affairs he’s had have gotten out of hand and this [criminal charge] is him reaping what he’s sown."

Yet whatever her private feelings may be, her public persona has always been entirely on her husband's side. During a joint interview with her husband in November of 2014 — just as the accusations were beginning to gain steam — she brushed off the reporter who asked about the rumors with a terse, "No, no, we don’t answer that." A few weeks later she issued a statement calling her spouse "a kind man, a generous man, a wonderful husband, father and friend," and pointedly referencing the debunked Rolling Stone UVA rape story by noting, "An accusation is published and immediately goes viral…. None of us ever wants to be in a position of attacking a victim. But the question should be asked — who is the victim?" Since then she has been largely silent.

Camille Cosby also happens to be a producer and business manager. Whatever she says this week, she remains a baffling cipher. She has invested both her entire personal and her professional adult life in one man. And she has been steadfast in her loyalty to him. She has been loyal when he had to admit he'd spent twenty years trying to conceal an extramarital affair. She was loyal throughout Andrea Constand's 2005 lawsuit, a suit in which thirteen women testified they too had endured similar experiences to hers. But it's one thing to turn a discreet blind eye to your famous spouse's reported dalliances. There are plenty of high profile examples of wives of notorious womanizers who don't seem to mind the price of the lifestyle they enjoy. It's another to take seriously the accusations that the man you've spent your life with, the father of your children, is a serial rapist. Has Camille Cosby entertained that thought yet? Does she still believe he's the "victim" here? Or is it possible that at least some part of her believes the legion of women who say they trusted her husband and he sexually assaulted them, who say they are traumatized by his actions -- and that she's decided she's on his side anyway? And when you look at the man, you have to look at the woman next to him and wonder, what did you choose, Camille Cosby? And how do you live with it?

Watch our video recap of the story: