The dermatologist, locally famous for his ubiquitous public transit ads, was one of the last of a dying breed 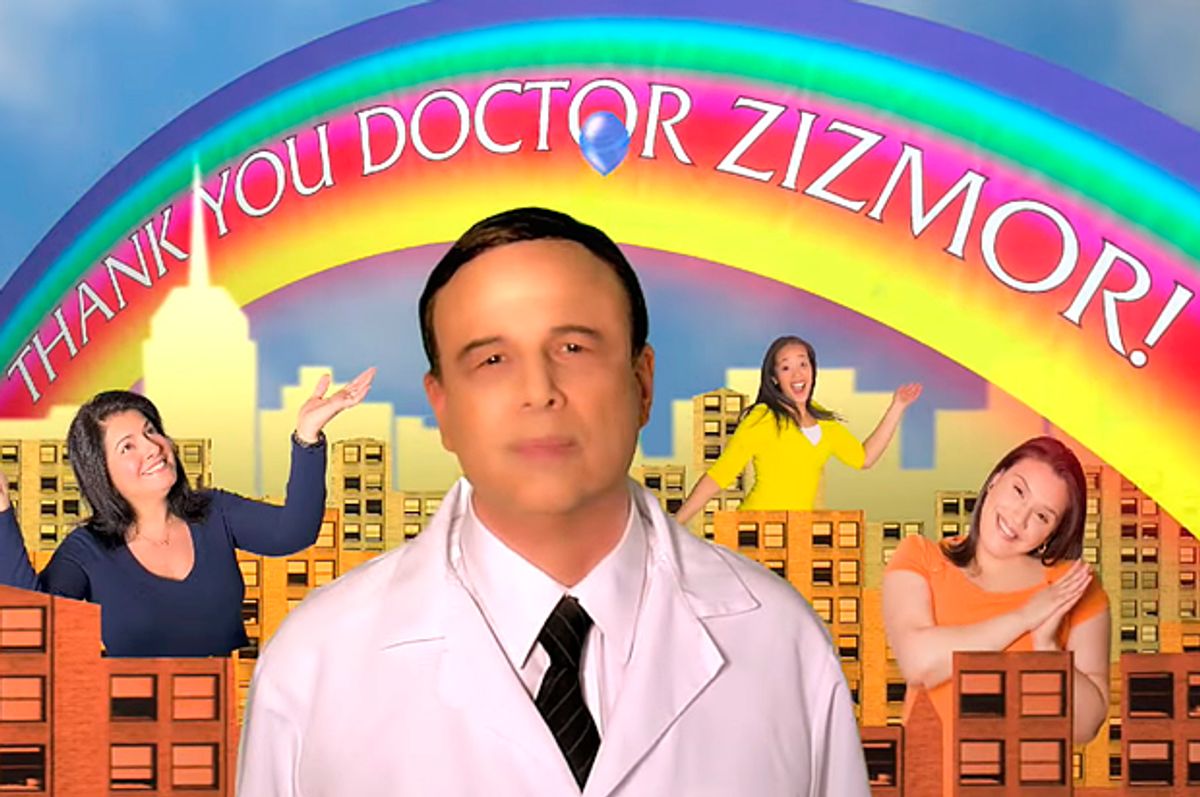 These are dark days for New York City's hallowed institutions. First, CBGB's — like a horribly reanimated zombie version of a beloved old pal — couldn't stay buried and reemerged as a restaurant. As a restaurant in Newark. Newark Airport. Now, Dr. Zizmor is hanging up his white coat. And just like that, another little spark of local color — the regional pitchman — disappears.

For decades, dermatologist Dr. Jonathan Zizmor has been as familiar to New York's subway riders as unexplained service delays and manspreading are. He's been parodied by Nick Kroll, turned down "30 Rock," and paid homage to by Snickers. Over the span of 30 years, his rainbow-festooned ads have graced our subways and our local television. As he explained to Gothamist back in 2009, "Why did I do it? In those days, dermatology was very exclusive, chic, chic. Most people, different ethnicity groups didn't even know there were dermatologists. I felt I wanted to open it up, treat people of all demographics and so on. And I really started doing that, from the very rich to the poor, black, white, whatever."

In the ensuing years, neighborhoods have gentrified, the subway token has disappeared, and we still haven't gotten a Second Avenue Subway, but Dr. Z, with his calmly reassuring Mona Lisa smile and promise of "beautiful clear skin," has not changed. At least, not below ground. "It's a 25-year-old picture," he said in 2009. "It's hard to do transparency, the color always comes out wrong. So that's why we use a 25-year-old picture." That he continued to age while his photograph did not has, in recent years, provided a reliable source of shock to some.

Back outside of the turnstiles, the now 70-year-old good doctor is, like the rush hour L train occasionally is too, moving on. In a Daily News exclusive Monday that was greeted with all the dismay of getting stuck on an express train and hearing the words "SHOWTIME, FOLKS!" Dr. Z's realtor, Sandra Waibel, revealed that the doctor has retired. "The Zizmors love to travel and have many social interests, hobbies, and friends," she says. "At the end of the day, they are just like the rest of us." A family friend adds that Dr. Zizmor is now spending more time studying the Talmud.

Zizmor's retreat is, for New Yorkers, just another excuse for to engage in our favorite pastime — lamentations about the end of an era. But you don't have to have a Metrocard to appreciate Dr. Zizmor's enduring appeal. Whether you live in Gotham or Elsewhere, USA, every town's got its own regionally-famous pitchman celebrity — but they are becoming an increasingly rare species. When Cal Worthington, a California car dealer whose entreaties to "Go see Cal" spanned 50 years, died in 2013, the New York Times honored him with a lengthy obituary. Seattle's Rob Thielke died last year, and when he did, many were shocked that the man who'd been appearing in those memorable ads for Vern Fonk Insurance for twenty years was not the late Vern Fonk himself. He died the same week as Paul Goldenberg, the founder of Paul’s TV & Appliances and the self-appointed southern California King of the Big Screen. The company folded in October.

Anyone with a phone and a YouTube account can attain a degree of fame. But the old school pitchmen had something else — durability. Year after year, they represented an unapologetically hokey stability, a promise to never change and to never be cool. And though we may not see Dr. Zizmor's kind again, it was a good run. Besides, it'll be years before the MTA actually takes down those ads.