Clinton marriage mystique: How their partnership went from liability to asset — especially for younger voters 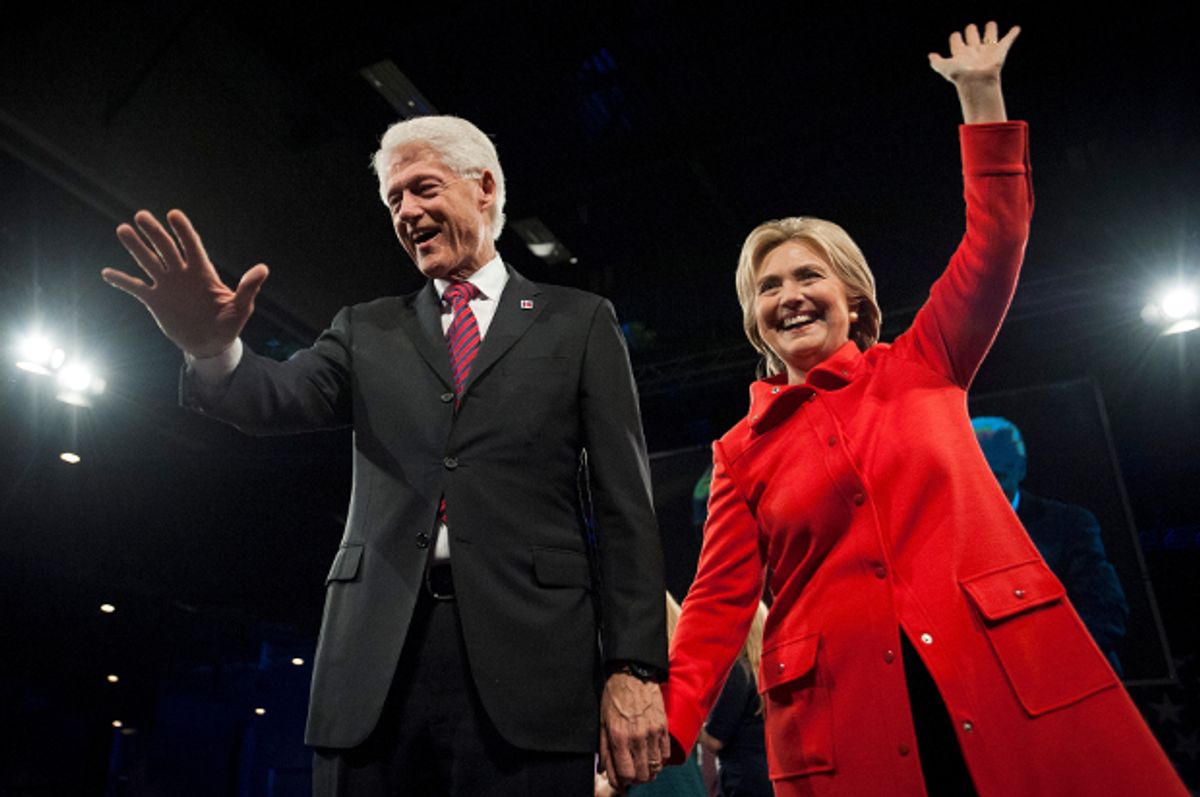 Back in the 1990s, we heard a lot about the marriage of Bill and Hillary Clinton, and it was rarely pretty. Hillary was a scheming Lady Macbeth who was actually running the country. She changed her hair too often. She was a secret lesbian. Through the Gennifer Flowers affair rumors and even after the Lewinksky scandal broke, Hillary was staying with a man she didn’t love because she was coldly waiting her “turn” to be president. She even insulted Tammy Wynette.

Weirdly, there’s been a lot less right-wing fulminating over the Clinton marriage lately, despite the continued hatred of her. In the GOP debates, it’s often been enough to simply mention her name for the internal hissing to begin.

Some of these old notions have floated back over the last year or so – that Hillary is simply in a “business relationship” with Bill, for instance, or that he will pull the strings when she’s elected. Something important, though, may be different in the way the imagery works this time.

Today a high-profile column on the marriage came out in the New York Times, in which Frank Bruni discussed how hard it is to understand any marriage from the outside, as well as what could be the emergence of the controversial duo back into the center of the conversation.

Bill Clinton hit the campaign trail this week. That brought back memories, or rather Donald Trump hauled those memories to the surface, and we were reminded anew of all that Bill and Hillary have been through (and have put us through): the infidelities, the intern, the lies, the smears.

We were also reminded of Hillary’s role in defending him. How did that square with her claim to be a champion of women? It’s fair to ask.

But the fascination with the Clintons as a couple goes beyond that question, beyond those scandals, to the belief in many quarters that we can divine something essential about each of them by the fact that they teamed up and stayed together.

Everyone has a different view of the Clintons and their marriage, he says, and it’s really hard to tell what the reality is. “It’s a foolish game under any circumstances,” Bruni concludes. “It’s a dangerous one en route to the election of a president.”

But the weird suggestion in his column is that now that the artist formerly known as Hillary Rodham Clinton is running vigorously for president, her marriage might actually be an asset rather than a liability.

Why? It’s partly because gender roles have changed. For at least part of the electorate, especially younger voters, the reversal of traditional gender roles – the wife pursuing a serious job while the husband humbly supports her – makes Hillary (and Bill) look like progressives. (Bill even gets to play feminist hero.) It alienates some people, of course, but the center on this issue has shifted in the Clintons' favor.

In a tumultuous era, the Clintons' resilience also could win them points, especially from families who've been through rough times.

The other reason comes from a weird feedback loop: Salon critic Sonia Saraiya has written how Hillary Rodham Clinton inspired various popcult politicians – “The Good Wife,” “Parks and Recreation,” “Veep,” most clearly “House of Cards.” And now those televised women (and in some cases, their marriages) have made a female-led couple seem almost normal. (And compared to Claire Underwood, Hillary Clinton seems warm and compassionate.)

“It may not be Clinton’s title to win,” Saraiya wrote. “But our pop culture, at least, is thirsty for our first female president.”

The trick here is that pop culture moves faster than politics: The United States had black jazz, film, and rock music heroes long before we had a black president; women have been a major presence in pop culture since, oh, P.T. Barnum was promoting Jenny Lind, and we’ve still not seen a woman lead the nation. It still may be too soon. But the bizarre twist is that the notorious marriage may actually push her toward the White House rather than away. Stranger things have happened, but not many.