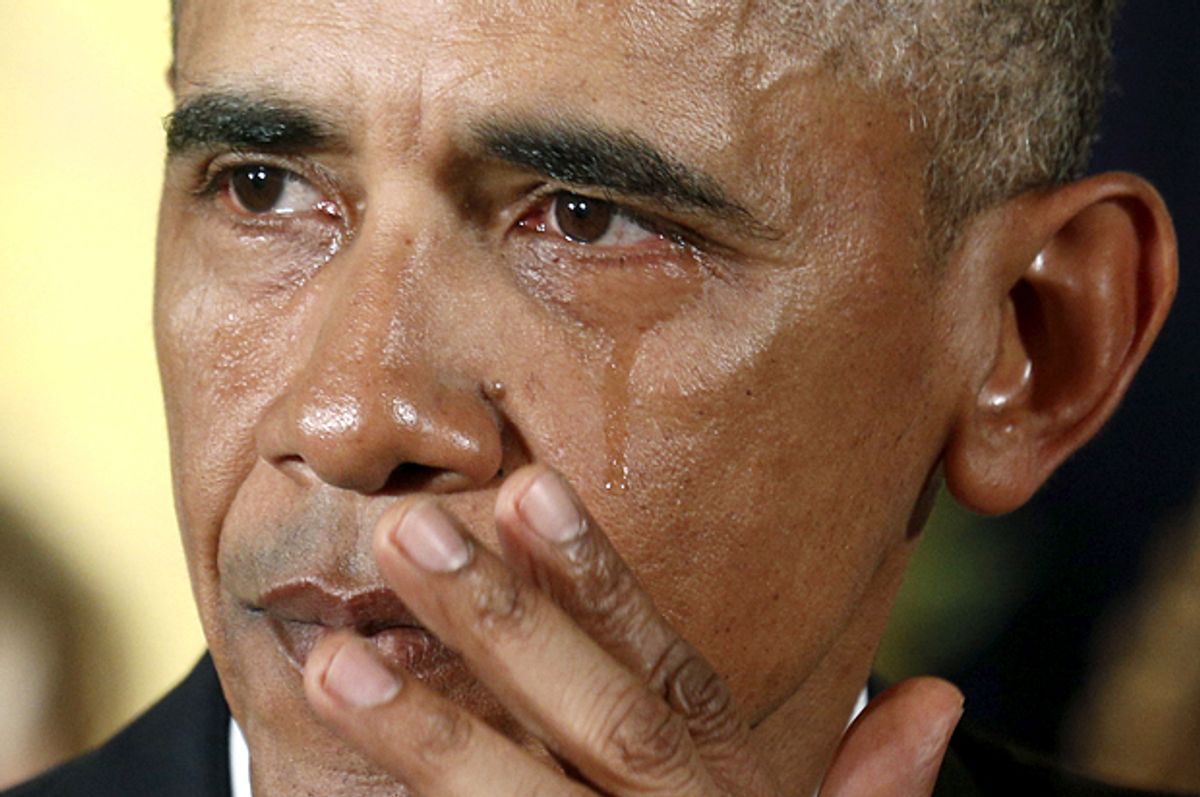 For a man to shed tears is often presented as a taboo in American culture, a violation of the masculine code. If so, it’s a taboo honored more in the breach than the observance, in our endlessly sentimental nation with its endlessly sentimental notions of masculinity. Saying that American men don’t cry is like the supposed rule in Greek mythology that living people cannot visit the Land of the Dead: It never happens, except for all the times that it happens. So if right-wing commentators (or anyone else) describe Barack Obama’s televised tears during his Tuesday national address on gun control as unmanly or unpresidential or anomalous, we have to figure out what they really mean.

Tears define the pathos and profundity of American masculinity, to a large extent. Men cry in beer commercials and at football games. Reports differ as to whether Douglas MacArthur personally cried during his Farewell Address to Congress in 1951, after Harry Truman had fired him for openly yearning to invade China and launch World War III. But when MacArthur delivered his last public speech, at West Point 11 years later — and what a bizarre, turgid and fantastical masterwork of masculine ideology that was — a reporter on the scene observed “tears in the eyes of big strapping Cadets who wouldn’t have shed one before a firing squad.”

I can remember standing next to a posse of Texas A&M undergraduates of intimidating size and bulk (bear in mind that I am 6-foot-4 and close to 200 pounds) on the floor of the infamous 1992 Republican convention in Houston, while they wept uncontrollably during Ronald Reagan’s last major public appearance. In cases like these, of course, it’s all about who is doing the crying, and why. Those West Point cadets and College Station frat boys had unlimited license to blubber like 8-year-old girls because they were manly men confronted with the immeasurable mythic greatness of America, which is of course the best possible reason for tears. (Seriously, that MacArthur speech? It’s like a Tarantino movie, full of stuff Donald Trump would think was too crazy. It has an army of zombies leaping from their graves, and a galactic war against space aliens. It has a mangled quotation from Plato, “that wisest of all philosophers.” It has “the witching melody of faint bugles blowing reveille.”)

Barack Obama does not have permission to cry, for a bunch of obvious reasons and some that maybe less so. Given his well-known socialistic, Islamophile leanings and his funny name, his tears are inherently suspicious. (Under the conventions of old-school American masculinity, I mean.) We perceive — correctly, I would say — that whether the Bears win the Super Bowl or go 1-15 is for Obama a subject for sardonic commentary, not profound emotion. The president did not shed tears over the abundant glories of America this week, nor did he melt before the hypnotic power of MacArthur’s patriotic mantra “Duty — Honor — Country.” He cried because terrible things have happened, and he has been unable to prevent them. In the most literal sense, it was an admission of weakness. That, of course, is the least acceptable reason of all.

As Salon’s Amanda Marcotte wrote on Wednesday, many people in the conserva-troll commentariat seemed offended or outraged by Obama’s evident emotion, to a suspicious and psychologically revealing degree. I don’t want to give those people more virtual ink, but we have heard Twitter suggestions that the president had rubbed Ben-Gay in his eyes to produce “fascist tears,” that he was indulging in “bad political theater,” and that ISIS was sure to see our weepy chief executive as yet another sign of America’s decadence and weakness. Obama obviously does not possess “the pathological lack of empathy” required to be leader of the Free World, as Marcotte put it.

Now, for people affiliated with a political party whose leading presidential candidates are Donald Trump and Ted Cruz to complain about “bad political theater” — dude! I don’t even know what term could describe that. That goes way beyond ironic or ludicrous, into the terrain of shameful hypocrisy and murderous insanity. It would be perfectly respectable, and indeed advisable, for a manly man to let a few rugged tears leak down his rugged cheeks at a memorial to the Americans who were killed in the Benghazi raid, for example. Their sacrifice stands as a monument to freedom, or something. But for the president to cry because a disturbed young man bought assault weapons at the mall and shot a bunch of first-graders for no reason — and because we did nothing to stop it from happening and then did nothing to stop it from happening again, over and over — that’s pussified and infantile and effeminate.

Still, I have to say this: When right-wingers perceive something mysterious lurking behind Obama’s Zeitgeist-shaping tears, something unexplained that goes beyond the proximate cause, they’re not wrong. They may not be right in the way they think they’re right, but that’s nothing new. There is no contradiction in believing that Obama felt genuine grief over Sandy Hook and Charleston and Aurora and the other mass shootings that have haunted his presidency (even in an era, as I have previously observed, when violent crime is near an all-time low) and that larger and more far-reaching questions were also involved.

It sounds like a cheap partisan argument to suggest that Obama was crying over seven years of near-total political paralysis, and over the dubious or underwhelming presidential legacy he will soon leave behind. I can feel you recoiling in horror, O Salon reader, because that's pretty much what they’re saying on Fox News: Obama cried because his presidency has been a failure. I’m not using that word, because we honestly won’t know that for some time, and I’m not claiming that some other plausible president would have been a whole lot better. Indeed, I’m not claiming that the country is governable, in its present disordered and self-deluded condition.

But Barack Obama is one of the most intelligent and analytical people ever to occupy the White House, and I feel pretty sure he can see the situation clearly. Our social and cultural and political failure to control the private ownership of lethal weapons, which is unique among advanced nations and has caused no end of carnage and tragedy, is grievous enough all by itself. But it’s also a symptom of deeper endemic failures that have bedeviled America during the Obama years: failures of justice, failures of decision-making and responsibility, failures of compassion, failures of both reason and imagination.

This is the guy who ran for president promising to get us out of Iraq, close the prison at Guantánamo Bay and reduce government spying and government secrecy. Maybe those things were never possible or practical; whatever the sober men in the dark suits told him between election night in November of 2008 and Inauguration Day in January of 2009 was some scary shit. But it was possible and practical to become the first president to order the push-button, long-distance summary execution of an American citizen, and I’m afraid that one will live in infamy.

Whatever you make of the Obama administration at the seven-eighths pole — and yes, I know, the Affordable Care Act and the Iran treaty and the climate deal are not nothing — his presidency began on a huge wave of optimism and devolved into a tragic and peculiar tale. He has spent an inordinate amount of time trying to manage an unmanageable situation and negotiating with people who did not want to negotiate. He wanted to change the course of American history and has done so, in Victor Frankenstein fashion, by driving the Republican Party into madness and enabling the monstrous rise of Donald Trump. Was any of that his fault? Maybe not, but it’s a pretty good reason for a grown man to cry.