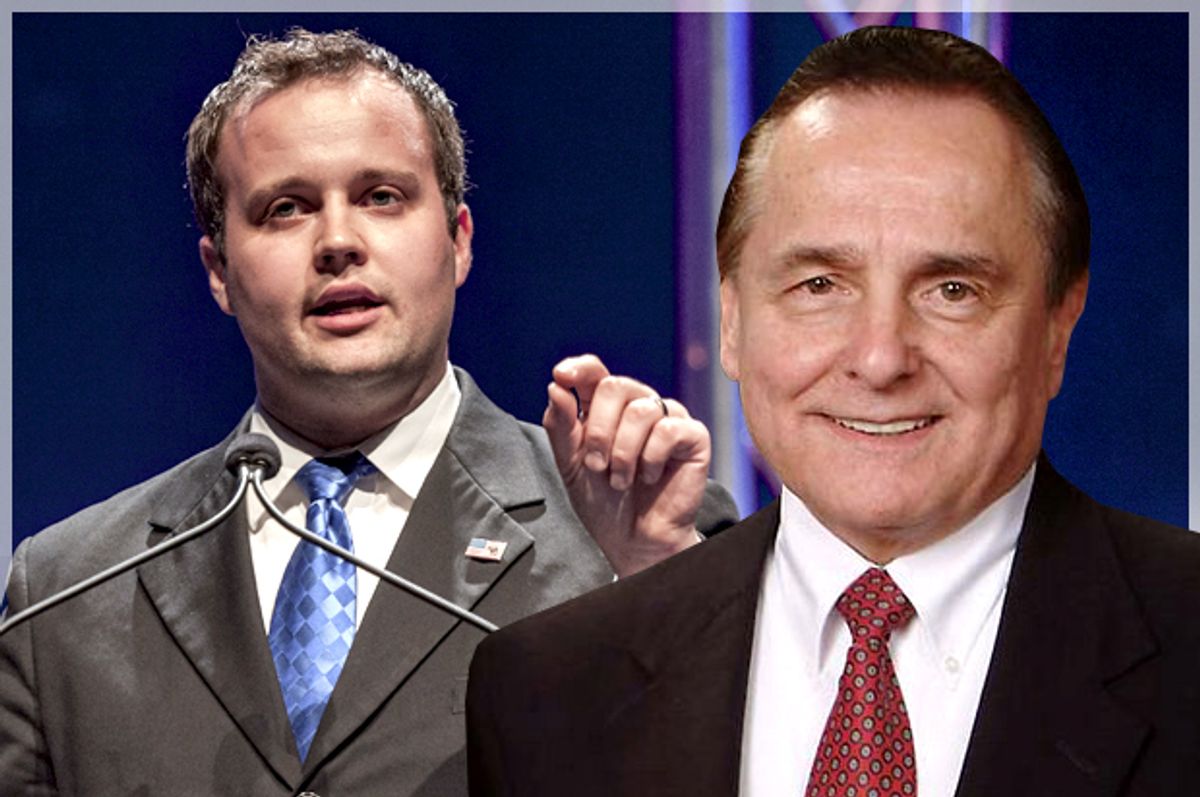 Things just keep getting worse for Bill Gothard. If you thought your 2014 and your 2015 were challenging, sorry, buddy, but this year's going to be even more intense. On Wednesday, ten women filed suit against the Christian homeschooling leader — best known for his close ties to the puzzlingly still-famous Duggar clan — accusing him and other members of his organization with "sexual abuse, harassment and cover-up."

Gothard is the founder of the Institute in Basic Life Principles, an organization "established for the purpose of introducing people to the Lord Jesus Christ and dedicated to giving clear instruction and training on how to find success by following God's principles found in Scripture" He's also the founder of the Advanced Training Institute International home education program. As a bonus, he has been embroiled in controversy over sexual misconduct since at least the eighties, when Gothard's brother Steve resigned from IBLP after allegations he'd had affairs with "several secretaries" at the Institute. At the time, Gothard himself briefly stepped down amid allegations he'd known about his brother's behavior and done nothing.

Yet the organization continued to thrive. Gothard has associated with Republican leaders like Mike Huckabee — and Huckabee's endorsement of the Institute as offering some of the "best programs available for instilling character into the lives of people" is proudly displayed on its site. More prominent, though, has been Gothard's and the Institute's ties to America's favorite reality show breeding achievers, the Duggars. In a feature for Talking Points Memo last fall, Sarah Posner investigated the connections between the family and the Gothard empire, exploring where eldest son Josh went for "counseling" after he'd reportedly molested five underage girls, including his sisters, as a teen. As she wrote at the time, "Although none of the Duggars has ever publicly identified it as such, the facility where Josh was sent in Little Rock is owned and operated by the Institute in Basic Life Principles, an insular and authoritarian evangelical homeschooling ministry whose charismatic founder, former followers say, sexually harassed female employees, blamed rape victims for provoking their attackers, and subjected young disciples to grueling physical labor for little or no pay." Gothard, meanwhile, told the Chicago Tribune at the time that the Duggars "certainly cannot be faulted in what they tried to do to correct the problem. The problem was corrected."

Gothard's problems, on the other hand, clearly have not. Since 2012, Recovering Grace, a site for former members of the "Gothard generation" to share their experiences, has revealed numerous stories of individuals who say they "survived physical and/or sexual abuse that causes nightmares and trauma even today." In 2014, Gothard resigned from the Institute, following allegations of sexual harassment and failure to report child abuse. Then this past October, five women came forward to sue the Institute, seeking $50,000 each in damages and claiming "the organization and its board of directors enabled and covered up sexual abuse and harassment of interns, employees, and other participants in its programs."

As the Washington Post first reported this week, the original five women have been joined by five others in an amended lawsuit that includes the new accusers and adds Gothard's name to the complaint. In the most shocking allegation of the suit, a Jane Doe plaintiff says she was sent to the IBLT after her father and other family members raped her, and that Gothard "taught that children were to obey their parents even if they were being sexually abused." She further says Gothard and another IBLT counselor sexually abused her during her time there.

The Institute, for its part, seems content to distance itself from its founder, with a statement Wednesday saying, "Many of these allegations concern conduct that allegedly occurred as early as the 1990s, and, as claimed, primarily involved Mr. Gothard. Since March 2014, Mr. Gothard is no longer associated with the Institute." And whatever the outcome of the case, the now 81 year-old Gothard's fall from public grace is already bringing a measure of satisfaction to some of his accusers. "He was built up to a god-like state in our eyes because he was a man who could do no wrong. I looked up to him as a father figure, almost like how catholics look up to priests, bishops or their pope," one of the plaintiffs told the Washington Post Wednesday. "Now I can see a photo of him and say, 'You can’t touch me.' That’s incredibly freeing to me."