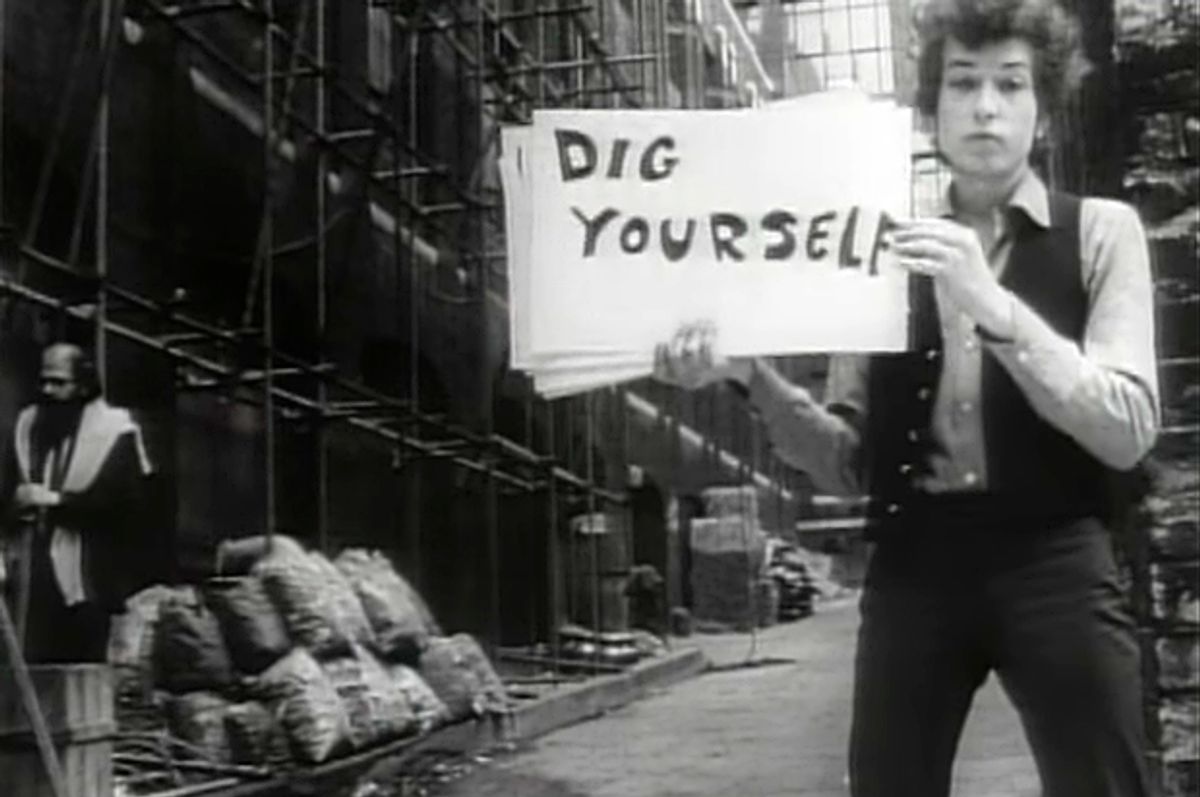 Bob Dylan in the video for "Subterranean Homesick Blues"
--

Don’t get me wrong, I really enjoy and find grace in the simplest of rock lyrics. While I don’t condone the activity, the Ramones’ “beat on the brat with a baseball bat,” is among my favorites. So is German '80s era group Trio’s “Da Da Da” (“I don’t love you you don’t love me…da, da, da…”). And I enjoy a good instrumental. I even like songs with lyrics I can’t make out, like “Louie Louie” or that Sly and the Family Stone song "There’s a Riot Going On," where he sounds like he’s falling asleep on the mic.

At heart, though, I’m a word geek, and the more words an artist can stuff into three to five minutes the better. Chuck Berry, Bob Dylan, Patti Smith, Leonard Cohen, Elvis Costello (listen to “Beyond Belief” lately?), John Cooper Clarke: these are my people, my rock and roll poets, but where have they gone in the 2010s?

Every so often, over the past five decades, we could count on at least one brain-twisting single bursting forth from all the pop radio and inspiring us to want to re-learn to read big books. Some intrepid songwriters said, Fuck four chords and a rhyme, I’m going to Dickens the shit out of these four chords!

I was listening to one of my Spotify playlists the other day and the song “88 Lines About 44 Women,” a 1984 New Wave hit by The Nails, happened to come on (and when I say "happened" I mean pretty randomly, as the playlist is 28 hours long and entitled "Quality New Wave" … look it up).

I’d always loved this song (44 couplets about 44 women… a sort of faux-Casanova’s version of Esquire’s eternally gross “Women We Love” feature, populated with gals like “Debbie Ray,” who came from a “perfect Norman Rockwell home,” to “Tonya,” who was “Turkish and liked to fuck while wearing leather biker boots,” or Brenda, who had a thing for “certain vegetables and fruits.” The song, expertly rhyming, is anchored to a very simple, almost novelty keyboard riff, with a baritone hummed hook propelling it; once you hear it, you never forget it.

“'88 Lines...' was informed by that cheesy sounding Casio,” Marc Campbell, the song’s writer and vocalist, told me via email. “We recorded about five minutes of our playing and I went home and wrote the lyrics. There was enough music to accommodate 44 couplets.”

The Nails, one of the decade’s great cult bands, were list-song happy. They’d also cover Los Hombres' “Let It All Hang Out,” and later issued “The Things You Left Behind,” which is an itemization of what an ex-boyfriend finds in his gone girl’s flat.

But the main inspiration for “88” came from the poet Jim Carroll’s 1980 hit “People Who Died.” Another tabulation (appropriately over a Berry-style riff) of the late Basketball Diarist’s unfortunate pals who all met their Maker too young. “Teddy,” who fell off a roof on East 29th Street, “Bobby,” who got leukemia…

“When I wrote lyrics for ‘88 Lines...’ I consciously used the repetitive style of ‘People Who Died,'” Campbell said. “I love that song. The specificity of it. The detail. And the accumulated power of mantric repetition. I also drew inspiration from poet Joe Brainard's book 'I Remember,' in which Brainard simply lists things he remembered.”

By 1980, the year “People Who Died” appeared on Carroll and band’s debut "Catholic Boy," the art and craft of packing song space with hyper-verbosity was commonplace to hip hop and various modes of reggae, especially songs featuring toasting, but had fallen off a bit in rock and roll since the ’60s heyday of Dylan and Reed. Even the Monkees had a hand at it:

Disco and punk songs were simpler, though often no less sublime. And with the exception of Cooper Clarke, who dressed like Dylan anyway, attention spans seemed to fade. For every “Walk this Way,” and “Life Is a Rock," there was a “Fly Robin Fly” (as in “up up to the sky”).

There’s an element of jive and humor to the list song that may be too subtle for the disco dancer and the run-of-the-mill pogo-er with the safety pin earring. It throws back to hep jazzers and swingers like Cab Calloway and later Mose Allison, a sort of fleet-tongued hustle to beat the band. “Humor is definitely part of what makes '88 Lines' enjoyable,” Campbell said. “There are some funny lines in the song. Some witty wordplay. I wrote it fast and generally that's the best way to capture the energy of the moment. And like many songs that could be seen as being full of sexual bravado, I wanted to bring a Rudy Ray Moore vibe to the ceremonies,” he says, invoking the disco-era film icon.

As the ’80s progressed, the indie rock era became a bit too self-serious. Hip hop seemed to grow even more lyrically expansive with Public Enemy, De La Soul, Big Daddy Kane and others offering rapidity and dexterity over their beats, and the dancehall genre grew incredibly popular. But in the rock realm, early R.E.M. lyrics might as well have been “Louie Louie,” inscrutable and mumbled. That is, until 1987, when they surprised everyone with the fluke hit “It’s the End of the World as We Know It,” one of the greatest list songs ever recorded.

Probably the most popular — if not critically, certainly commercially — list song is from Billy the Kid. In 1989, Mr. Joel, recipient of every prestigious award this country can bestow outside of combat honors, ventured into the land of the goofers and hepsters, although it seems as if he didn’t really know it. Billy was being sincere when he gave us “We Didn’t Start the Fire,” and we rewarded him for his possible cluelessness with a number one hit (his last on the pop charts, as it turns out).

Campbell remembers the first time he heard the hit: "Blasting from a record store on 2nd Ave. in Manhattan, I thought it was from a new Joe Strummer solo album. I didn't hear it clearly, obviously, but imagine Strummer singing “Begin, Reagan, Palestine, Terror on the airline / Ayatollah's in Iran, Russians in Afghanistan.'”

You kind of can, can’t you?

Rap’s lyrical tradition not only stands — through artists like multiple Grammy nominee Kendrick Lamaar, Run the Jewels and yes, Eminem — it’s flourished when compound rhymes and intrepidly long storytelling are concerned. But in pop and rock, we're in a bit of a drought. Australian singer-songwriter Courtney Barnett was another of this year's stop-and-listen highlights, but let’s face it — we are not going back to the time when a band like The Nails can get on the radio with a rock and roll song that has over a certain amount of verses. Attention spans are shriveled. Don’t bore us, get to the chorus reigns, and if a hunger is there, it’s being fed by technology like a French goose.

There’s just too much information to savor, so the savvy, chart-minded pop star goes for the blips and pings instead. “People are listening," said Campbell. "The problem is too many pop artists aren't giving music fans much to listen to. It's still possible to grab people's attention. Miley Cyrus is proof of that. But when it comes to the deep shit, people prefer the shallow end of the lyrical pool. No one wants to think about shit.”