David Bowie bent the gender rules: His "not sure if you're a boy or a girl" cool helped rewrite fashion and masculinity codes

From the beginning, Bowie challenged what it means to look like — and be — a man 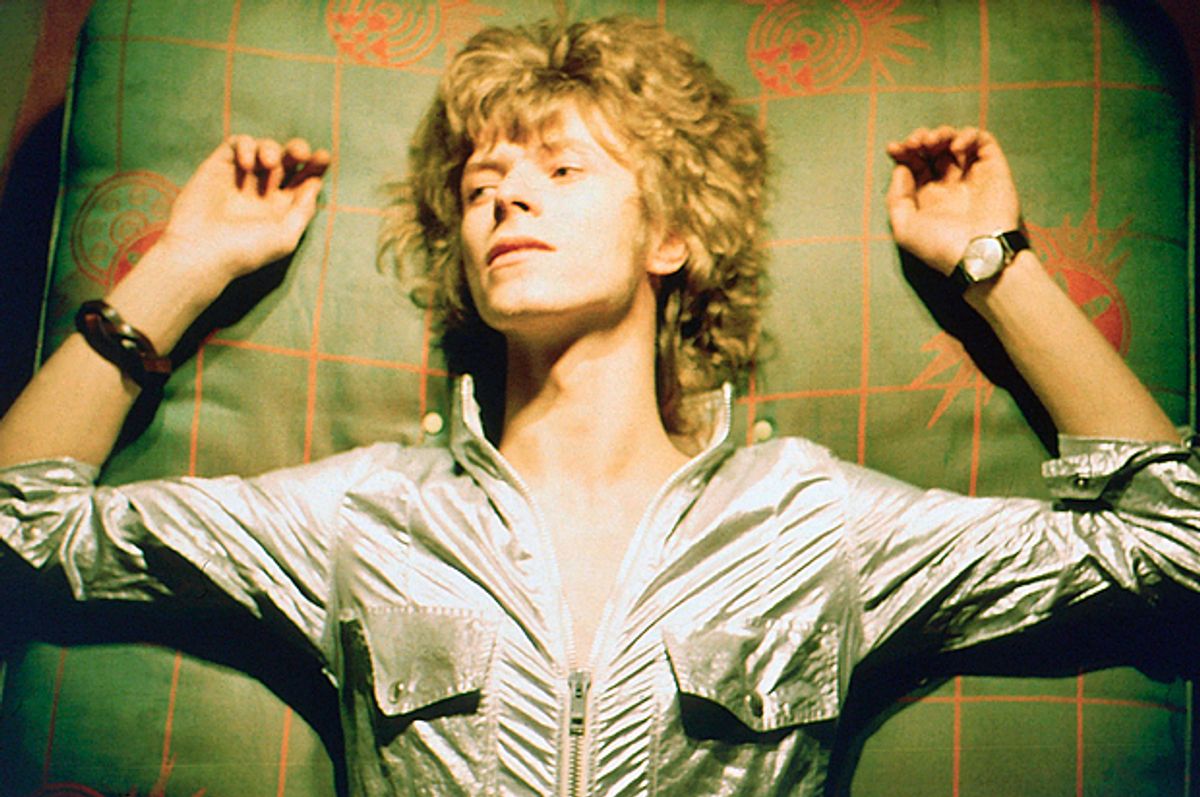 Even before he assumed the "proper job"of rock god, David Robert Jones —better known to the world as David Bowie, Ziggy Stardust, the Thin White Duke — was already a trailblazer in a role he'd wind up being famed for up to his untimely death on January 10: badass gender radical.

Watch him more than fifty years ago, at the tender of 17, being interviewed on "BBC Tonight" about "the rebellion of the long-hairs," and saying, "We've heard comments like 'Darling' and 'Can I carry your handbag?' thrown at us. I think it just has to stop now…. We all like long hair and we don't see why other people should persecute because of this."

Look at him a few years later, on the cover of his 1970 album "The Man Who Sold the World," sprawling on a couch in a satin dress, his hair past his shoulders, looking every inch a stunning pre-raphaelite lady. Look at him, a year later, on the cover of "Hunky Dory," tenderly caressing his perfectly made-up face. Look at him, again and again, throughout his stunningly bold, eclectic career — his hair dyed in bright reds and blonds, painted on lightning bolts cutting a swath across his face — and see a man who married two women and fathered two children and helped rewrite the rules of what it really means to be a man.

Bowie launched his career as part of a generation of early-Seventies artists like Marc Bolan and Lou Reed and the New York Dolls, all tweaking the traditionally hyper-masculine world of rock and roll with a brazenly feminine glamour. And he did it in a way that was simultaneously post-sexual and incredibly sexy. He was a space alien with two different colored eyes, far beyond the confining limits of male and female. He sang of rebels who made mothers unsure "if you're a boy or a girl." He laughed off what it means "when you're a boy" -- including having other boys check you out. When he wore men's suits, he looked as elegant as Marlene Dietrich in them. He was also, Christ, so goddamn hot.

For much of his public life, Bowie remained ambiguous about his private sexuality. He had been married to his first wife Angie for six years when he told Playboy in 1976, "It's true, I'm bisexual. I suppose it's the best thing that ever happened to me." But 17 years later, he admitted to Rolling Stone, "I didn’t ever feel that I was a real bisexual." He was perhaps, as he later described, more of a "gay mime."

Yet for a man who skewed mostly straight, he nevertheless kicked down doors. He owned his beauty; he wore it proudly. And that swagger became for other young people — especially if you were coming of age in the '70s and '80s — a catalyst. He was the embodiment of possibility outside of conventional identity norms, with an allure that, held up in different lights, could be whatever you wanted to see in it. His mystique could stop you in your tracks, regardless of whatever you thought you knew about your orientation. He made boys feel the urge of longing, and for straight girls like me, he was the guy who could make you eroticize high cheekbones and a platinum pompadour. And believe me, there's a whole generation of us who watched "The Hunger" in the eighties like whoa. Gay, straight, male, female, you pinned his face on your bedroom wall because he was yours.

Bowie was one of a kind, a legend of music and art and style. He will be remembered for so many things, that the impact of his loss is still not even yet quantifiable. But among his chief achievements has got to be the space he made in the world for the piece of non-conformity that rests inside of all of us. And of all the many things to thank him for, surely high among them is his part in that liberating feeling, the first time you realize that the right response to "Not sure if you're a boy or a girl" is, "Who cares?" Let's dance to that.