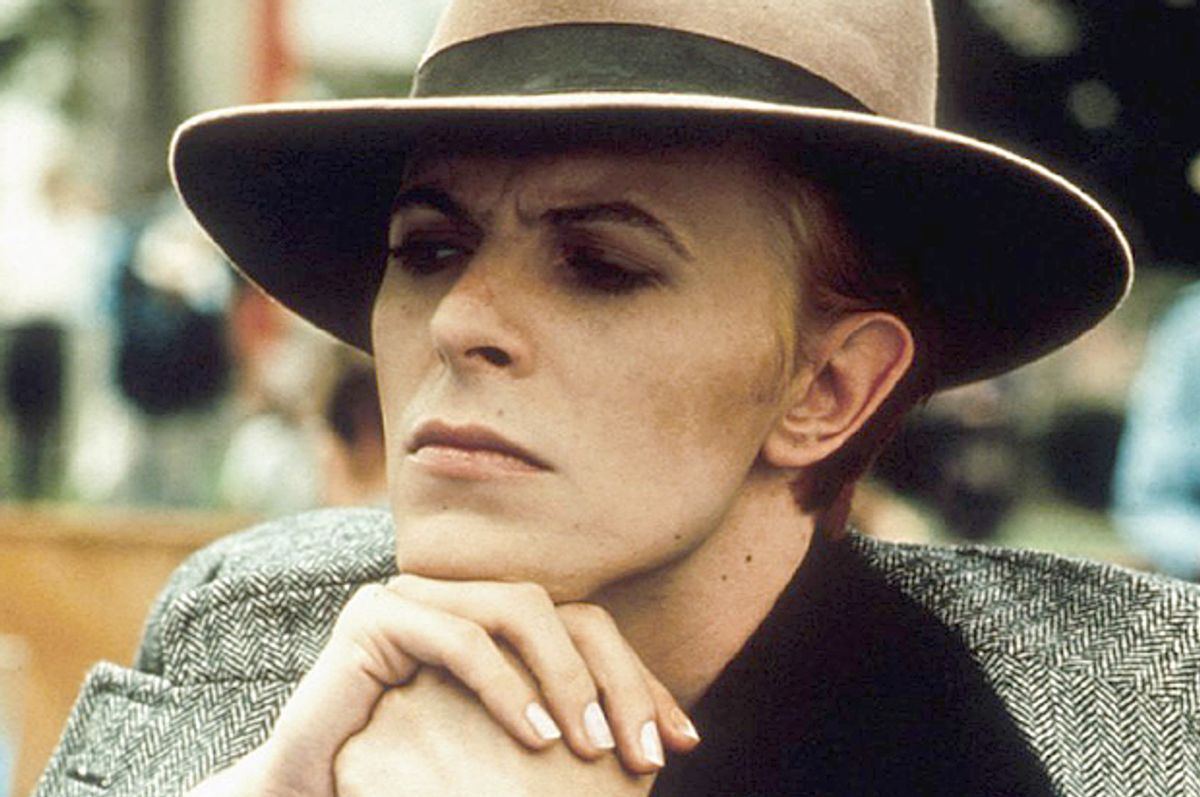 “I thought you died alone, a long, long time ago,” sings the nameless narrator to the title character in “The Man Who Sold the World,” one of the underappreciated mini-masterpieces of David Bowie’s career. (Kurt Cobain apparently agreed.) “Oh no, not me,” comes the response. “I never lost control.” Even in the context of 1970-whatever, that felt like a comment or a joke on Bowie’s endless aptitude, or endless hunger, for erasing himself and rewriting himself, his ability to walk the line between cynicism and idealism, between artistic detachment and pop passion, without being false to either. (Are there actually two characters in that song? Or is the man who sold the world talking to himself?)

If David Bowie was the Man Who Sold the World, a secret agent or undercover operative within pop culture, he was also “The Man Who Fell to Earth,” a guileless alien seeking love or sustenance on a hostile planet. (That’s the title, and central character, of the 1976 Nicolas Roeg film in which Bowie made his peculiar acting debut.) Every article written about Bowie after his death was announced on Monday will describe him as a shape-shifter or a chameleon, and it does no good to steer around that inevitable cliché. He challenged us at every moment to consider the distance between the mask and the man, the persona and the personality, and to recognize that we never knew what that distance was or whether it existed.

It was certainly not irrelevant that Bowie was a musical innovator and synthesizer of amazing facility and fluidity, one of a handful of genuine geniuses of what Casey Kasem used to call the “rock era.” But even his preternatural musical ability was only one part of a lifelong performance or presentation or work of art, that of being David Bowie. If Richard Wagner’s operas represented the grandest fusion of all art forms (or Gesamtkunstwerk) that was possible in the late 19th century, David Bowie’s career in music and fashion and videos and film and celebrity came as close to that as anyone could in the late 20th century. If he had lived forever — and I thought he would; we all did — perhaps Bowie would have gotten around to doing a version of Wagner’s Ring Cycle in which he played all the parts, in half an hour.

Bowie was an inspirational figure and also a frustrating one, who spent his entire career either a step ahead of the rest of the culture or deliberately out of step with it. He was a hard rocker, a glam-rocker and a pop star, who worked in every musical genre from metal to disco. The guy in my freshman dorm who played “Diamond Dogs” every single day (in between playings of the first Van Halen album) would never have been caught dead listening to “Young Americans,” which came out less than a year later, or “Station to Station,” less than a year after that. This too is a cliché, but Bowie’s influences came from all possible directions. He had listened to Stravinsky and the Beach Boys and bebop and Aretha Franklin, all with the same avid attention. He modeled himself on Marlene Dietrich and Oscar Wilde and English music-hall performers and James Dean and, I don’t know, the antihero of some Strindberg play that existed only in his imagination.

Bowie wore dresses and spangly-stretchy girl-boy pantsuits and bespoke suits from Hong Kong and leather jackets off the rack in Soho. He certainly did not invent male androgyny or “gender-bending,” but he pushed those signals further, and into more ambiguous territory, than anyone else in pop music. Although he asserted in later life that he had always been heterosexual, Bowie clearly understood that whom he did or did not have sex with was not the issue. He prefigured many ideas about the fluidity of gender identity and sexual orientation that would gradually leach into the mainstream; he helped invent the radical gender discourse that would later be called “queer.”

He was Major Tom and the Thin White Duke and the doomed, desired and destructive Ziggy Stardust, the paradigmatic rock ‘n’ roll suicide. One reason we thought he might live forever is because there was something elfin about him, or even Elven, in the J.R.R. Tolkien sense. At some point he would tired of our world and sail off to distant shores from which no one returns, no doubt. But surely physical mortality was for the rest of us.

For much of his career Bowie was the whitest art-rocker imaginable, yet he was also deeply steeped in African-American pop, and in 1975 became only the second white solo artist to appear on “Soul Train.” (Elton John had been on the show a few months earlier, doing “Bennie & the Jets,” and fair play to the producers for that one.) I love Bowie’s great Berlin albums and his great early glam-rock albums and the aforementioned “Man Who Sold the World.” But I am not one of those rock purists who sees “Let’s Dance,” the 1983 album produced by Nile Rodgers that became Bowie’s biggest hit, as an anomaly or a failed experiment or, for the love of God, a sellout.

On the contrary, “Let’s Dance” is a great record and one of his signature accomplishments. Who else could have made a dance-pop classic, worthy of standing right next to “Thriller,” four years after the dense art-rock experiment of “Lodger,” which is just as good — just as important, if you like — in an entirely different direction? No one, that’s who. It’s as if Thomas Pynchon had followed up “Gravity’s Rainbow” by writing Stephen King’s “It,” or as if Arvo Pärt had taken a break from doleful Estonian choral music to crank out “Let’s Get Physical.”

Possibly I did more cocaine in the 1980s because of “Let’s Dance” than I should have, but I imagine I would have found other excuses. David Bowie changed my life, and I can say with total confidence that the same is true not just for many people of my own generation, but for many people older and younger than me. It’s difficult to explain to younger people how amazing and how dangerous the Rolling Stones seemed in the 1970s, now that they’re a pack of rich, leathery geezers with some agreeable classic-rock hits buried in the past. You never have that feeling with David Bowie, whose best records and most striking iconography does not feel dated in the least. In the only conversation I have ever had (or hope to have) with Justin Timberlake, he talked about how much he loved Bowie’s records and how they had opened his ears to unknown possibilities. (In Timberlake's better moments as a recording artist, you can hear those lessons.)

I first heard Bowie as a high school student in the late ‘70s, in the chaotic bohemian household of my oldest friend, who is also named Andrew. We sat around in his scarred Arts & Crafts living room, drinking booze his father supplied us and listening to Andrew’s older brother’s records. I was not cool enough to have heard any Bowie albums before “Low,” I think. Andrew played it for me and I didn’t get it at all. Then he played it again and then he played “Station to Station” and then he played “Ziggy Stardust,” and the next day I went out and bought as many used Bowie albums as I could find, including “The Man Who Sold the World.” I wrote to several old friends on Monday after hearing the news that Bowie had died, and Andrew wrote back right away. I had not suggested that he might be emotional or that we might have felt any moment of special connection, because we’ve never really done that too well. “I confess I’m not unaffected by this,” he wrote, which could not have been more perfect. We may get together and get drunk.

David Bowie did not die alone, or a long, long time ago. He never lost control. It now appears that his haunting final album, “Blackstar,” and the single and video for the song “Lazarus,” were created as an orchestrated farewell, and that his death has brought that particular artistic project to its completion. After processing the shattering news on Monday, and the news that even people who knew Bowie well did not know how sick he was, I have begun to wonder whether his return to recording in 2013, after a decade away from music, was in itself a tactical or strategic decision, part of his long goodbye.

Bowie died as he lived, and I don’t just mean that he finished an album and got it out just in time, although that was handled perfectly. I mean that he died weaving illusions that are not illusions, reminding us that you can stand at some analytical distance from things that will break your heart and that cannot be undone: Death, youth, love, rock ‘n’ roll. He told us this time what he has told us all along, which is that we can understand that beautiful things are artificial and manufactured, and that all meaning is conditional and transitory, and that all things will disappear and be forgotten — and we can do all that without surrendering our belief in the impossible.

Bowie played Nikola Tesla in Christopher Nolan’s “The Prestige,” and I suspect that's the best and most perfect role of his erratic acting career (in one of Nolan’s better films). Tesla was a scientific genius and technological innovator who perceived no clear boundary between the realm of science and the realm of magic, and who thought they might be different words for the same thing. Bowie was a magician and a technician in that same sense, and one of the most important cultural figures of the last 50 years. What we sometimes call a postmodern consciousness, or a “meta-awareness” — a cognizance of the created-ness of things, of our endless ingenuity in emulating a God we no longer believe in — was not a joke or a game to David Bowie. Or if it was, it was the joke that explained everything, as miraculous as any gem or any flower, the game that connects our souls to the stars.