Paul Ryan is an anti-poverty con artist: The media has fallen for his "serious" right-wing agenda yet again 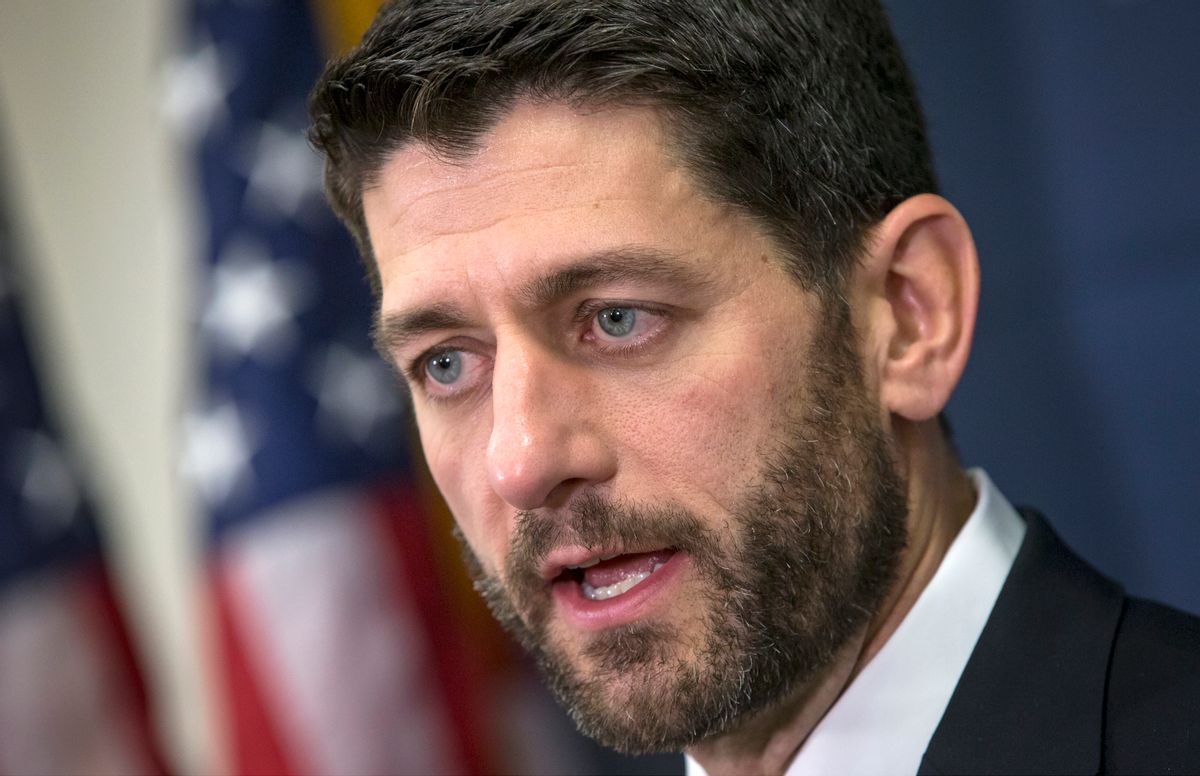 Tonight, the tableau at the State of the Union address changes for the first time in five years. Instead of John Boehner wreaking havoc with the color balance on television screens nationwide, House Speaker Paul Ryan will sit next to Joe Biden and behind President Obama. Of the three men in the picture, only Ryan will have a job in government next year, one he’s likely to keep for several more State of the Union addresses, thanks to the meticulous construction of Congressional districts.

It was inevitable, after Ryan was elected Speaker last fall, that he would enjoy yet another honeymoon period, when the media would label his agenda substantive, forward-looking, and laudatory, particularly relative to the traveling three-ring circus known as the presidential nomination. Ryan’s unearned reputation as a serious policy thinker not only causes pundits to swoon; it lets him get away with dressing up his most vindictive ideas as innovative breakthroughs in wonkery.

The most troubling part of the new Ryan hagiography is that he now commands a measure of authority on fighting poverty, for reasons that escape me. Ryan made a star turn at last weekend’s Republican poverty forum in South Carolina, which it should be noted lacked participation from the leaders of the nomination race, Donald Trump and Ted Cruz. But the House Speaker got virtually every other major figure in the party to fall in line with his ideas on the poor, such that there was almost no disagreement for the entire forum.

What are these consensus conservative ideas? Outside of using the word “poverty” a lot, Ryan’s main gambit is to provide less federal money for the poor, and to give that reduced amount in a lump sum for states to manage. This “block-granting” of anti-poverty programs would deprive them of funding during economic downturns, when the needs are most acute. It would also virtually ensure worse outcomes by turning over management of anti-poverty programs to state governments that have no interest in them.

Incredibly, the media extols such ideas as the rebirth of Republican compassion, a plank that the party can run on this year. Not only do they represent the opposite of compassion, they’re nothing new. We’ve tried block-granting before, with disastrous results, particularly during the Great Recession.

Currently, many anti-poverty programs – housing vouchers, childcare credits, the food stamp program (known as the Supplemental Nutrition Assistance Program, or SNAP) – fall into the “mandatory” spending bucket. Any eligible individual can access benefits as long as they meet the qualifications. This gives these programs an elastic quality: spending goes up when people fall on hard times, and down when the economy recovers.

As economist Jared Bernstein explains, Ryan’s vision is to consolidate these mandatory programs into a fixed block grant (he uses the Orwellian term “opportunity grants”), delivered to the states each year to manage. That eliminates the rubber-band effect. If recession hits, states have none of the flexibility that comes with additional funding, and must trim eligibility to husband scarce resources.

We know what this looks like. In 1996, Temporary Assistance for Needy Families – also known as welfare – was converted into a block grant. Because the late 1990s coincided with good economic fortunes, lawmakers immediately patted themselves on the back for their wisdom, incorrectly linking the jobs boom to moving people from “welfare to work.”

But the Great Recession laid bare the impact of block-granting TANF, making it incapable of responding to increased need. While SNAP benefits increased as unemployment grew, TANF recipients remained flat. The only innovation from block granting is to destroy the counter-cyclical nature of anti-poverty funding and cripple its effectiveness.

Absurdly, Ryan has suggested that, after block-granting SNAP and other programs, lawmakers could adjust the spending upwards during recessions. As Bernstein notes, this suggestion amounts to saying “Let’s break SNAP and then fix it again so it works the way it does now.” The suggestion is also disingenuous, as Ryan surely knows it would be a difficult political lift to pull off manually what currently happens automatically.

Handing over administration of these programs to state government, meant to leverage “laboratories of democracy” that can tailor programs to fit their citizens, also cripples their reach. Just look at Medicaid: predictably, the most conservative states have the stingiest eligibility requirements and are the least likely to have expanded the program under Obamacare.

Some point to Ryan’s support for expanding the Earned Income Tax Credit as proof of his seriousness on tackling poverty. However, he would offset that increase by canceling other benefit programs and restricting eligibility in others, literally robbing Peter to pay Paul Ryan.

All you have to know about Ryan’s posture toward poverty is his frequent references at the South Carolina forum to the “poverty-industrial complex.” He truly believes, or at least wants people to believe, in the existence of Big Social Services, a collection of organizations somehow getting rich off poor people. Tycoons desiring a quick payday could go literally anywhere else in our economy than banking on maintaining services for the poor. Even confining this to government operations, there are any of 1,000 better ways to ensure a life of comfort. Like going into defense contracting, for example.

We should expect Republicans to agree with Ryan’s stealth attacks on the poor, wrapped in misleading language of empathy. But there’s no reason for allegedly objective media to be taken in by this con game. Too many pundits project their wishes for a sensible, policy-rich, conservative alternative onto Ryan, whose budget proposals only add up with the support of “magic asterisks” that smooth over the extreme transfer of spending cuts for the poor into tax cuts for the rich.

So when reporters characterize Ryan as “injecting substance” into the Republican Party, understand that the substance is as ephemeral as cotton candy. In reality, Ryan’s pursuits reflect the same old slug-the-poor priorities that conservatives have peddled for decades. Paul Ryan is not running an idea factory, he’s running a public relations shop. Anyone seriously assessing his policy pronouncements should know the difference.