France's #TousAvecUneKippa day takes aim at anti-semitism: "if everybody wears one, nobody is a target anymore"

In the face of increasing violence, a response that uses its head 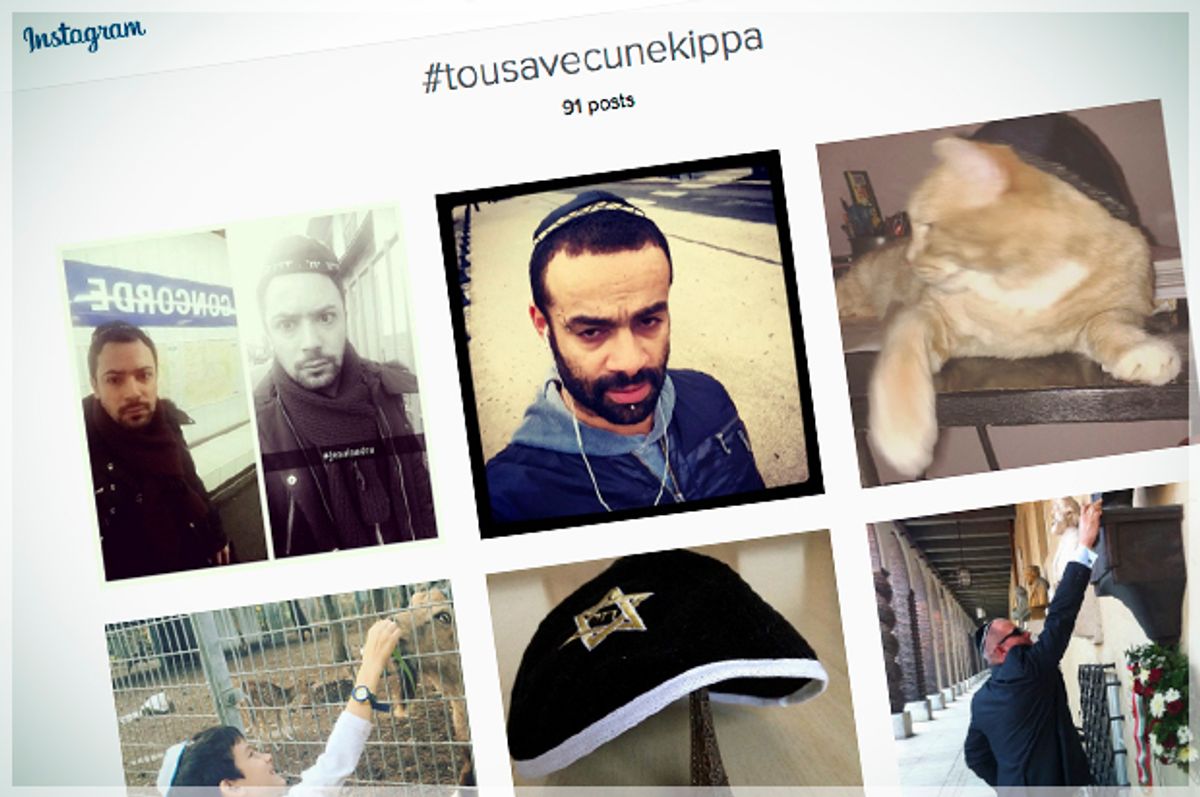 The appropriate response to hatred and intimidation — especially the kind that comes with a whiff of victim-policing — is strength, solidarity, and whenever possible, a healthy dose of humor. Well played, France's Sophie Taieb and Kerima Mendes, for coming up this week with a perfect response to extreme bigotry.

The souls of the people of France have been sorely tested over the past year, with two major terrorist attacks in Paris and then on Monday, with a violent anti-semitic attack against Benjamin Amsellem, a Jewish teacher in Marseilles. The 15 year-old suspect who assaulted Amsellem with a machete later claimed he was acting "in the name of Isis." In response, Zvi Ammar, described by the Independent as "the main Jewish leader in the French city of Marseille," has suggested that Jewish men and boys avoid wearing their skullcaps "until better days." He says, "Unfortunately for us, we are targeted. As soon as we are identified as Jewish we can be assaulted and even risk death." And Brice Hortefeux of the center-right Republicans party conceded that while "giving up is giving in," it would be impossible "not to modify your behavior in the face of these unspeakable acts." Amsellem had been wearing a kippah when he was attacked.

The idea that in the face of danger, potential victims should take extra caution isn't a crazy one — the whole point of being a violent criminal is that you're going to hurt people without regard to what's really fair about that. Yet it's also true that maybe we could take some of the burden of preventing assault off the people who are targets of assault. And the suggestion that Jewish men reevaluate how they display their identity has echoes of New York City Police Commissioner Bill Bratton's tip, earlier this month, that women "adopt a buddy system" to avoid being sexually assaulted by cab drivers. It was one that Councilman Jumaane Williams promptly responded to by calling "not a comprehensive approach to a problem."

Similarly, as this week has worn on, Jewish leaders in France have urged against a "defeatist attitude," with France's Israelite Central Consistory president, Joel Mergui, saying: "If we have to give up wearing any distinctive sign of our identity, it clearly would raise the question of our future in France." But Sophie Taieb, who is Jewish, and her friend Kerima Mendes, who isn't, want to take the idea of not giving up further. They have proposed to celebrate Friday the 15th with a show of togetherness, via #TousAvecUneKippa (Everybody with a kippa). The hope has been to get people all over the world posting selfies with kippas, or just their own artistic spin on the skullcaps. Taieb told BBC Trending this week that "We wanted to do something funny. The idea is that everybody -- Jewish or not -- should wear a kippah, because if everybody wears one, nobody is a target anymore." She adds that as a woman, she won't be donning one herself, but will instead post an image of herself in appropriate head wear. (She has, however, reposted pics on her Twitter of cats in them.)

The BBC notes that France has the third largest Jewish population in the world, behind Israel and the United States. Anti semitic violence there is on the rise — in a feature for Vanity Fair last year, writer Marie Brenner reported on Jewish families facing telling their children, "Do not let anyone know you are Jewish. It is a private affair," and leaving the country outright. A display of resistance, one that is lighthearted and good spirited, won't do very much to change that. Nor does it address the country's pretty spotty overall report card on tolerance, when it continues to enforce policies specifically against wearing religious head coverings. Yet it's a move toward changing the conversation, one that says fear is not an effective response to terror, and that both head and heart are stronger than hate.