The media's dangerous Hillary-centrism: Why our obsession with frontrunners is hurting the Democratic Party

During Sunday night's Democratic debate, Martin O'Malley was casually brushed aside by moderators. That's not okay 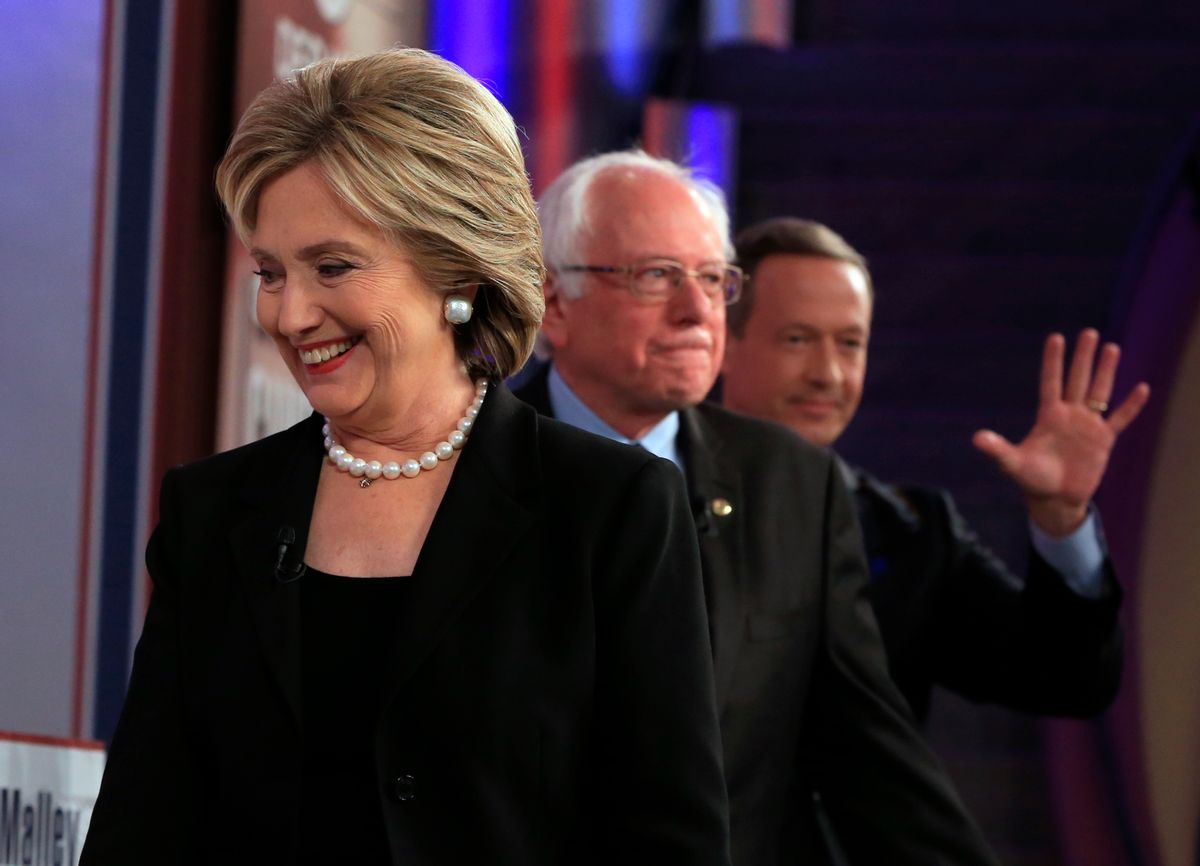 The most important moment of Sunday night's Democratic presidential debate involved not what was said, but what moderator Lester Holt made sure his audience would never get to hear. After permitting Hillary Clinton and Bernie Sanders to offer lengthy replies to a question on the drug epidemic, he cut off Martin O’Malley and moved to a commercial break despite the former Maryland governor repeatedly requesting “just 10 seconds” in which to offer his own thoughts.

This was more than just an act of brazen unfairness toward O’Malley. Since the start of the 2016 election cycle, both major parties have been swept up in a “horse race” mentality regarding their respective fields of presidential prospects. If a candidate isn’t believed to have a viable shot at winning their party’s nomination, he or she is openly dismissed shuffled into the background so that their “electable” counterparts can receive disproportionate attention. As a result, underdogs like O’Malley are given scant opportunity to change their fortunes – and, in the process, voters are denied their right to fully assess the options available to them.

On the Republican side, this has been most evident in the presence of so-called undercard debates, in which GOP candidates with low poll numbers are forced to compete separately from the rest of the race. Although somewhat justified by the massive size of the Republican field (which started out with 17 candidates), by relegating its participants to a status of automatic inferiority right from the get-go, the undercard debates have implicitly mocked the notion that the party is even humoring their candidacies. “They’re not candidates for president anymore. They’re barely even men,” observed Jason Linkins of The Huffington Post. “They’re more like the angry, tortured darkseekers from the movie ‘I Am Legend,’ eternally scheming from their shadowy lair to lure other human beings into their grasp, ensuring that none outside of their cursed domain might live.”

By contrast, instead of having two events on each debate night, the Democratic establishment has only scheduled six primary debates in total – and, as many critics have pointed out, aired them at times that seemed to all-but-guarantee low ratings. By limiting their voters’ exposure to all their options, the party has in effect given a huge boost to whichever candidate is perceived as the frontrunner – in this case, Hillary Clinton. “Look, there was a clear intent to bury these debates to the benefit of Clinton,” remarked a Democratic campaign official to Politico, in reference to DNC Chairwoman Debbie Wasserman-Schultz’s well-known support for Clinton’s presidential ambitions. “And it is doing a disservice to the Democratic Party. The GOP is blowing out numbers – and we are protecting Hillary Clinton.”

Of course, because the Democrats only have three candidates running right now (they started out with six, but three dropped out), one might assume that each would receive considerable attention simply by virtue of the small size of the field. To an extent this has been the case with Sanders, who as a staunchly left-wing alternative to Clinton has managed to break fundraising records and emerge as her chief rival in the polls for the nomination. At the same time, Sanders only received this boost because his grassroots campaign forced his poll numbers up and thus compelled the media to take him seriously. Since O’Malley has not benefited from a similar grassroots boom, he has been left in the proverbial dust by the Beltway class. Indeed, the fact that he is widely regarded as irrelevant has become the central feature of his public image, with "Saturday Night Live" lampooning the casual way he is routinely dismissed as a serious contender.

It’s worth noting that, though certainly not perfect, O’Malley deserves better treatment than this. As I’ve discussed before, O’Malley has a decent record as governor of Maryland, from legalizing same-sex marriage and abolishing the death penalty to raising the minimum wage and extending in-state tuition breaks to undocumented immigrants. Just as importantly, he lacks many of the electability concerns that beset Clinton (who has been a polarizing and scandal-plagued figure since her days as First Lady) and Sanders (who could be painted as a radical in the general election). In an election year that could see the Democratic nominee facing off against Donald Trump or Ted Cruz, any politically viable option with a progressive record at the very least warrants serious consideration.

On a deeper level, though, Holt’s rude treatment of O’Malley is symbolic of the fundamentally distorted way we approach major political races today. It exposes the degree to which our political primaries have been rigged – sometimes by design, sometimes by default – to favor candidates whom political and media leaders decide in advance ought to be taken seriously. Even when voters rebel against this by supporting candidates who are despised by their own parties’ establishments (Trump and Cruz among Republicans, Sanders among Democrats), they are still shackled by a “horse race” mentality which holds that only candidates who poll well and/or are regarded as predetermined “frontrunners” (Jeb Bush among Republicans, Clinton among Democrats) should be taken seriously. As a result, it makes no difference whether a political party has more than a dozen candidates or only three – if a candidate isn’t generally regarded as having a realistic chance of winning, they aren’t put in a position where they could reverse their fortunes, thereby rendering the prejudgment into a self-fulfilling prophecy.

For any of this to change, voters in both parties need to insist on absolute fairness when it comes to their primaries. Even if a candidate has low name recognition and abysmal polling results, we should expect that they be afforded as much air time and media attention as the candidates whose names are household words and whose polling numbers are off the charts. Not only will this open up our political system to all comers, but it will empower voters in the process. After all, if quality leadership is essential to the success of any world power, then voters only stand to benefit when they are presented with as wide a variety of potential leaders as possible.

Unfortunately, as Sunday night's Democratic debate made clear, we have become complacent with the idea of being told who we should and should not take seriously. So long as this mentality prevails, it won’t matter who wins our elections – the integrity of our democratic society winds up losing.