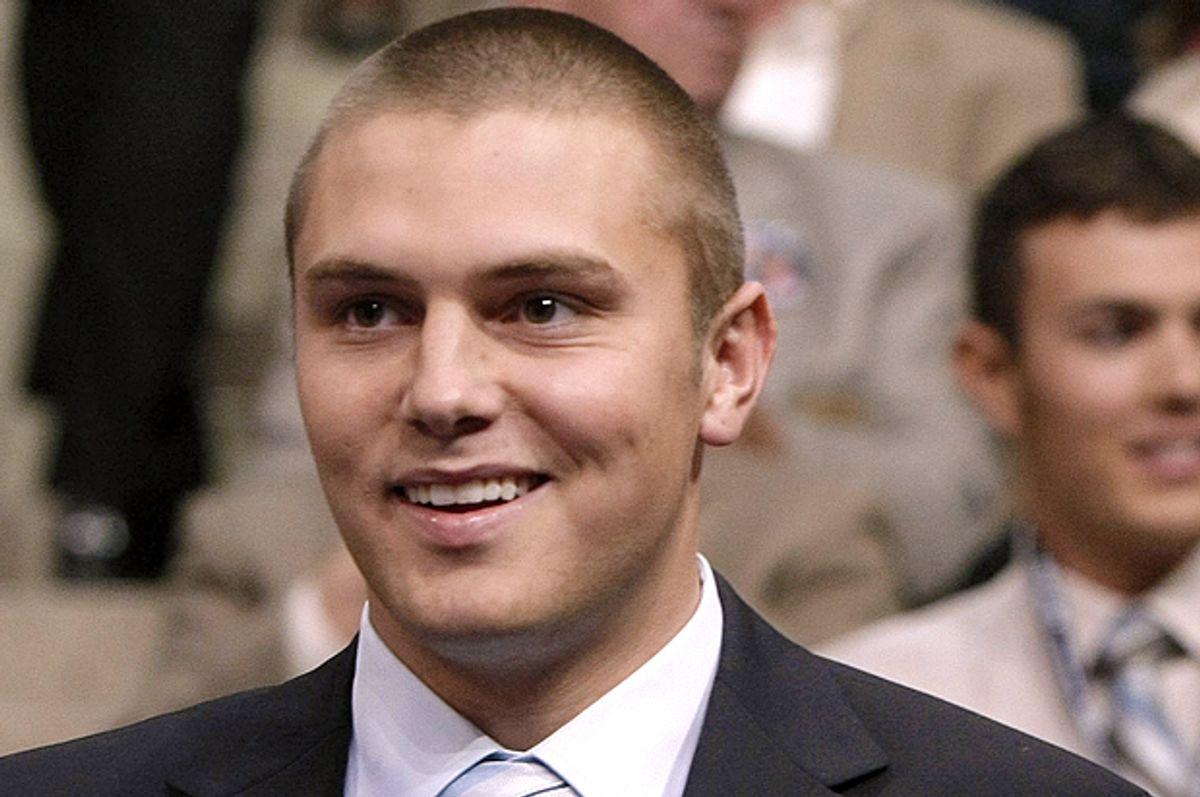 It's shaping up to be quite a week for the Palin clan. Bristol tried to stir up some beef with Ted Cruz on her blog by using the vernacular of "Full House's" Stephanie Tanner. Matriarch Sarah threw down some seriously bonkers word salad, because we actually live in a country in which a) Donald Trump is a Republican presidential frontrunner and b) he somehow believes that having Sarah Palin's endorsement on any subject is a good idea. And then there's eldest son Track, who on Monday was arrested on domestic-violence charges in Wasilla, Alaska.

KTVA in Alaska reports that the police were called to an incident at Sarah Palin's home at around 10 p.m., where the 26 year-old Track lives with his parents. According to the police report, there were two phone calls — the first by a woman later identified as Track's girlfriend of one year, Jordan Loewe, who claimed "a male had punched her in the face and that a firearm was involved." The other one was from Track Palin himself, stating that "the female was drunk."

The officer's report describes noticing an injury to Palin's eye, that "his eyes were bloodshot, and there was a strong odor of alcohol on his breath and person," and that he was "uncooperative, belligerent, and evasive with my initial line of questions." The officer eventually ascertained from Palin that "Loewe was his girlfriend and that the disturbance stemmed from Loewe maintaining contact with an ex boyfriend." He said the injury on his face was because Loewe "threw a bow" [elbow] at him.

Both Palin and Loewe confirm the two had been arguing, but Loewe claimed that Palin was calling her names, and in an attempt to stop him from "touching her," she told him she'd called the police. She says he "struck her on the left side of her head near her eye with a closed fist" and then Palin then kicked Loewe on the right knee." The report notes "bruising and swelling around her left eye" and "a small red area near her knee." Palin then allegedly took her phone and threw it across the driveway, and then went inside. She says she got her phone and went in, where she found Palin holding a rifle and threatening suicide, saying, "Do you think i'm a p___y? Do you think I won't do it?" Police found an unloaded AR-15 near the scene, and said that Palin denied using it "but stated that they were spread throughout both residences on the property." The report also concludes that Loewe said she'd tried to call 911 several times, but her phone was "likely broken when it was thrown." She was found by officers crying and hiding under a bed. The Associated Press reports, meanwhile, that a breath sample registered Palin's blood alcohol level at 0.189. In Alaska, a blood level of .08 or greater is considered intoxicated.

Palin is now charged with "fourth-degree assault, fourth-degree misconduct involving a weapon and interfering with a report of domestic violence." The AP also notes this isn't his first brush with the police -- "In September 2014, [Track] and other Palins were involved in a brawl that broke out at a party in Anchorage. No arrests were made in the melee, and no one wanted to press charges. But according to a police report, Palin had blood around his mouth and his hands. He was belligerent until his mother told him to talk to a police officer." The full police report is a thing of epic insanity.

Track Palin is a combat veteran who served in Iraq during his mother's vice presidential campaign in 2008. At the time, a colleague described him to US News as "a good kid and a good soldier and he'd like to remain anonymous." But keeping a low profile can be hard for anyone to do after serving in conflict, and harder still in a family with the last name Palin.

In 2010, the Daily Beast reported on the incidence of domestic abuse among veterans, noting, "The majority of studies of treatment-seeking veterans with post-traumatic stress disorder (PTSD) or combat-related mental health issues report that at least 50 percent of those veterans commit wife-battering and family violence." And the US Department of Veterans Affairs says that over one fifth of veterans experience some form of substance abuse disorders. Track Palin is not necessarily among those numbers, but it's hard to imagine any of his circumstances — including an unfortunate combination of guns "spread throughout" the home and a high blood alcohol level — being a safe situation for anyone who enters it. And while Track's mother continues to mock "all that hopey, changey stuff," it's impossible to ignore how much hope and change her own family needs right now.