After endorsements from a long-dead movie icon and the worst candidate in history, Trump's ready for Freddy 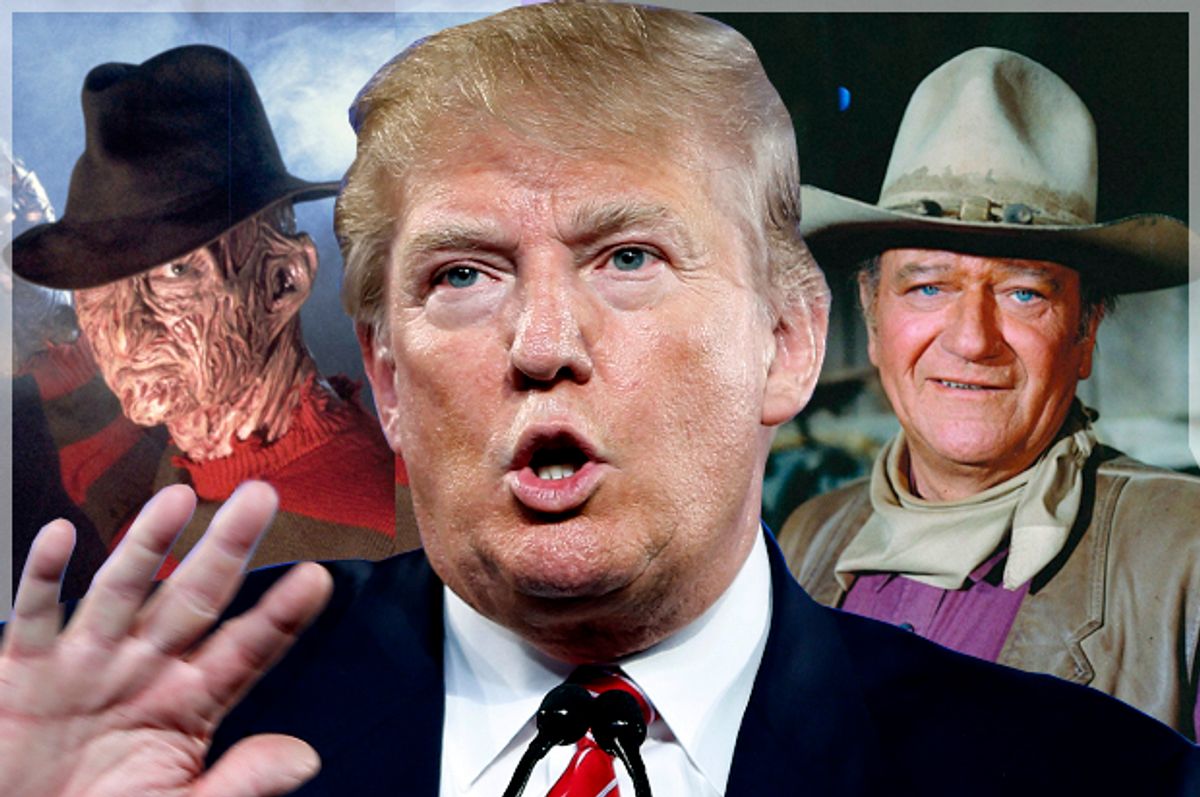 Now that Donald Trump has the endorsement of a movie star who’s been dead for more than 35 years and a failed politician whose public and private life has been a total disaster – I mean, he’s golden, right? A total shoo-in, not just for the Republican nomination and the White House but Amazing World Rulership and Domination and Return to Greatness™. I don’t know who completes the trifecta of endorsements most perfectly, after John Wayne and Sarah Palin. (It must be Halloween, because one of them’s a ghost and the other’s a goblin! I’m here all week, and the brisket-style tempeh is so good.) My colleagues have suggested Chuck Norris, Ted Nugent and Vince Vaughn, but those are all a) way too obvious and b) people who have probably already endorsed Trump, without anyone noticing or caring.

I’m going with Freddy Krueger, basement demon-scourge of the Reagan era, who has approximately the same complexion as Donald Trump and a similarly heavy-handed sense of humor. “Let’s make America great again, Nancy!” Skritchy-skritchy-skritch. Like John Wayne, Freddy has not been alive for some time. Like Wayne, who repeatedly played cowboys and war heroes in the movies but did not like riding horses and never served in the military, Freddy is not what he appears to be. He’s a symbolic projection of American masculinity and violence, of weakness presented as strength. If you find the version of those things presented by Marion Morrison of Winterset, Iowa, more appealing (to give John Wayne his true and, let’s face it, suspiciously girly name) – well, that’s subjective, am I right?

As for Sarah Palin, she’s like Freddy too, at least insofar as Palin is a grotesque figure out of the Grand Guignol tradition who murders people in their dreams. No, wait – I wasn’t supposed to tell you that. Let’s go more generic: Like Freddy, Palin is alternately horrifying, comic and tragic. They both represent the American dream rendered as incoherent and gruesome fantasy, but in both cases despite the carnage they leave behind their failure and defeat are foregone conclusions. I have spent way more time thinking about the “Nightmare on Elm Street” universe than any normal person should, and in the end there is considerable pathos to onetime janitor Fred Krueger, a victim who redirects his pain and suffering upon the innocent. Perhaps the most diplomatic way of putting it is to say that I sense a similar dynamic at work behind the erratic personal and political career of Sarah Palin, which resists all efforts at rational explication.

I suppose it’s true that for those on the troglodyte right who are super-excited about the Palin endorsement, and the endorsement of whomever among John Wayne’s extended family has the self-appointed authority to speak for the long-dead star, Freddy Krueger doesn’t hold the same appeal. But why the hell not? I mean, presumably the Trump campaign wants to reach “younger voters” who are in touch with “popular culture.” Admittedly what I mean by that is voters younger than 70 and pop culture subsequent to Elvis’ second appearance on "The Ed Sullivan Show." The Freddy Krueger demographic, otherwise known as people such as myself who spent too much of the 1980s drinking beer and smoking weed and watching horror-movie sequels, is almost entirely untapped!

Some dude wrote a whole article on the Breitbart site on Tuesday about why the John Wayne pseudo-endorsement was a big deal, because it proved that Trump “cares about what we are about.” (I read that sentence several times without understanding it. Who is “we”? And how ridiculous is the verb “to care,” associated with Donald Trump?) His only real argument is that despite having died in 1979, John Wayne remains the most popular movie star among older, conservative white men. In other words, the decaying demographic that is most likely to support Trump in the first place has only heard of one movie actor, who didn’t actually endorse anybody in this race because he’s dead and he can’t. (And did I mention that he kind of had a girl’s name?) Breaking news!

Sarah Palin has made her own bed through repeated acts of headstrong idiocy and ignorance, and she gets to lie in it, even if one suspects that Krueger-like subterranean or psychological factors are at work. What can we say about the fact that the endorsement of someone who thoroughly sabotaged the only national campaign she has ever been involved in (or ever will be) and then resigned from the office to which the voters of Alaska had actually elected her, for unclear reasons, is widely seen as a big boost for Trump among conservative voters?

I guess we can say the obvious: There is a large constituency among white Americans that doesn’t much care about winning elections and doesn’t care at all about governing the country. They just want to blow everything up or tear it down. They’re like first-wave British punk rockers, circa 1977, except with fashions by way of Dick’s Sporting Goods and Dress Barn. They wanna be anarchy.

I’m not sure why I feel impelled to defend John Wayne from Donald Trump, if only a little. Wayne was in many respects a lamentable individual. Over the last couple of days many people have recirculated his infamous Playboy interview from 1971, in which Wayne described himself as a “white supremacist,” probably without understanding the specific resonance of that term, and justified the Native American genocide. (Natives, you see, were “selfishly” hanging onto North American real estate that white people needed for swimming pools and shopping malls.)

By that time the erstwhile Marion Morrison had pretty much become a Trump voter, an aging, ignorant bigot embittered by Hollywood’s political infighting and the culture wars of the 1960s, slowly dying of cancer after years of self-inflicted damage. (Wayne was a prodigious drinker, and for much of his life smoked six packs of cigarettes a day.) But Wayne had also had a tempestuous on-and-off affair with Marlene Dietrich – the archetypal American plus the archetypal European – and that alone makes him a more interesting person than Donald Trump will ever be. (Trump’s ex-wife Ivana could be understood as a third-rate Dietrich imitation.)

Wayne spoke fluent Spanish, and all three of his wives (to whom he was enthusiastically unfaithful) were of Latin American origin and not United States citizens from birth. He was a conservative Republican all his adult life, serving as a figurehead for anti-Communist groups in Hollywood and then as the major celebrity booster of the Vietnam War, long after public opinion had begun to shift against it. But at the end of his life he broke with the GOP over the Panama Canal Treaty negotiated by Jimmy Carter (the Iran deal of its day, perhaps), and advocated handing over the canal to the Panamanian government. So during his last months of life, Wayne was besieged by right-wing hate mail, a curious irony those who venerate him now are unlikely to bring up.

This probably isn’t the right venue for a larger discussion of Wayne’s career as an actor and an icon, but his performances are far more interesting than his posthumous reputation as an all-purpose vessel for patriotism would suggest. There’s a Hollywood yarn, probably apocryphal, about John Ford watching Wayne in Howard Hawks’ movie “Red River” and exclaiming, “I never knew the big lug could act!” (Ford had already directed Wayne several times, most notably in “Stagecoach.”) He could indeed, and Ford got one of the great American screen performances out of him in “The Searchers,” a morally ambiguous western classic that expresses the psychic and erotic torment behind the murderous relationship between whites and Native Americans better than any other film.

Trump is an actor too, but nowhere near as good or as graceful. If Wayne’s movie persona was an artful simulation of idealized American masculinity, Trump is a debased copy of that simulation, with the stoicism replaced by empty bluster and the cowboy garb replaced by a $5,000 suit. Trump is the blowhard Eastern banker whose daughter will run away with Wayne at the end of the movie, except that he’s somehow managed to convince the terrified townspeople (at least for now) that he’s the real hero. John Wayne’s heirs and their corporate entity have done the Duke a disservice by pimping him out to this billionaire impostor and his psychotic Alaskan spirit guide, who seem bent on destroying Wayne’s political party and damn near everything else. Down in the basement, Freddy is sharpening his fingers and laughing.