Palin implies that her son Track, arrested for assaulting his girlfriend this week, has PTSD from combat 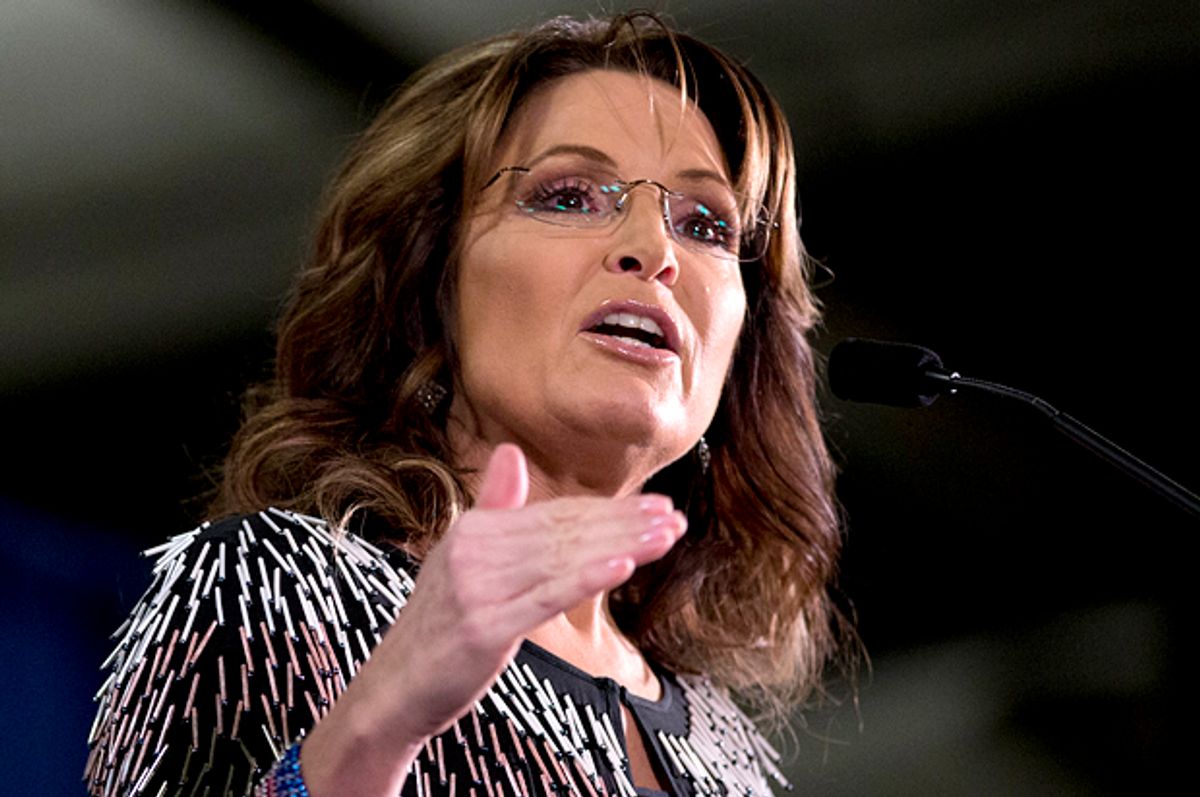 Moving forward in what appears to be a campaign to win the prize for Most Incoherent Human in America, Sarah Palin this week followed up her meme-worthy epic poem of an endorsement for Donald Trump with a truly fascinating explanation for her son Track's recent arrest for domestic abuse. It's Obama's fault. And that would actually be laughable if this wasn't about a 26 year-old grown man currently charged with fourth-degree assault, fourth-degree misconduct involving a weapon and interfering with a report of domestic violence.

Earlier this week, Track, who divorced his first wife in 2012, was arrested over an incident at the Wasilla home he shares with his parents. Police noted his current girlfriend had "bruising and swelling around her left eye" and described Track as "uncooperative, belligerent, and evasive with my initial line of questions." A breath sample registered his blood alcohol level at 0.189. In her conversation with the police, Track's girlfriend claimed he had threatened to kill himself, and an unloaded AR-15 was found near the scene. Palin denied using a weapon but told police "that they were spread throughout both residences on the property."

Track Palin was serving in Iraq as an air guard in the "Arctic Wolves," the Army's 1st Stryker Brigade Combat Team, during his mother's 2008 bid for vice president. He is routinely described in the press as a combat veteran, though some within the veteran community, based on Palin's discharge paperwork, dispute his actual combat duty.

But in a speech in Oklahoma on Wednesday, Sarah Palin said, "I guess it’s kind of the elephant in the room because my own family going through what we’re going through today with my son, a combat vet... like so many others, they come back a bit different, they come back hardened. They come back wondering if there is that respect for what their fellow soldiers and airmen and every other member of the military so sacrificially have given to the country." Then she zoomed in the real problem, saying, "When my own son is going through what he goes though coming back, I can certainly relate to other families who feel these ramifications of PTSD... our soldiers do return with. And it makes me realize more than ever it is now or never for the sake of America’s finest that we have a commander-in-chief who will respect them. They have to question if they're respected anymore. It starts from the top. The question, though, that comes from our own president where they have to look at him and wonder, 'Do you know what we go through? Do you know what we're trying to do to secure America?"

So you're strongly implying that your son is suffering PTSD the day after boasting of being "proud clingers of our guns," the same week he gets arrested with a weapons charge? And hasn't it been over a year since "a verbal and physical altercation" involving Track and other family members, one that a police spokesperson said that "alcohol was believed to have been a factor" in? And did you really not once mention the woman who's the alleged victim of your son's behavior? Yeah, thanks, Obama.

A year ago, Palin spoke out about mental health issues and veterans, telling a Conservative Political Action Conference audience, "As we gather here, we're safe, we're secure, we're having fun, four days together at a conference. In those four days, 92 of our veterans will have taken their lives." Whatever is really going on inside Track Palin's own head -- and we don't know because there's no prior indication he's been diagnosed with PTSD -- the mental health issues for veterans are serious, and affect not just them but their families and partners. But if you want to blame Obama for the undeniably far from perfect VA, you still can't say the president's one for dropping the ball on mental health funding in general, and mental health funding for veterans in particular. Mental services for vets expanded since Obama took office, including the signing of a 2009 bill to provide $4.6 billion "for mental health care to treat the psychological wounds of returning combat veterans, including post-traumatic stress disorder." Obama's 2016 budget includes $4 million for Veterans Mental Health First Aid.

Speaking this week in response to Palin's words, Paul Rieckhoff, head of Iraq and Afghanistan Veterans of America, said, "It's not President Obama's fault that Sarah Palin's son has PTSD. PTSD is a very serious problem, a complicated mental health injury and I would be extremely reluctant to blame any one person in particular." He added, "Now that she has endorsed Mr. Trump, I would encourage her to talk with him about it. Mr. Trump's campaign is pretty light on specifics about what he would do for veterans." And if Palin is so concerned about her son's well-being, maybe instead of complaining about what's happening in Washington, she could keep an eye on the assault weapons and alcohol situation under her own roof.