Sanders' economic platform isn't a cure-all, but it would represent a major step forward for racial justice 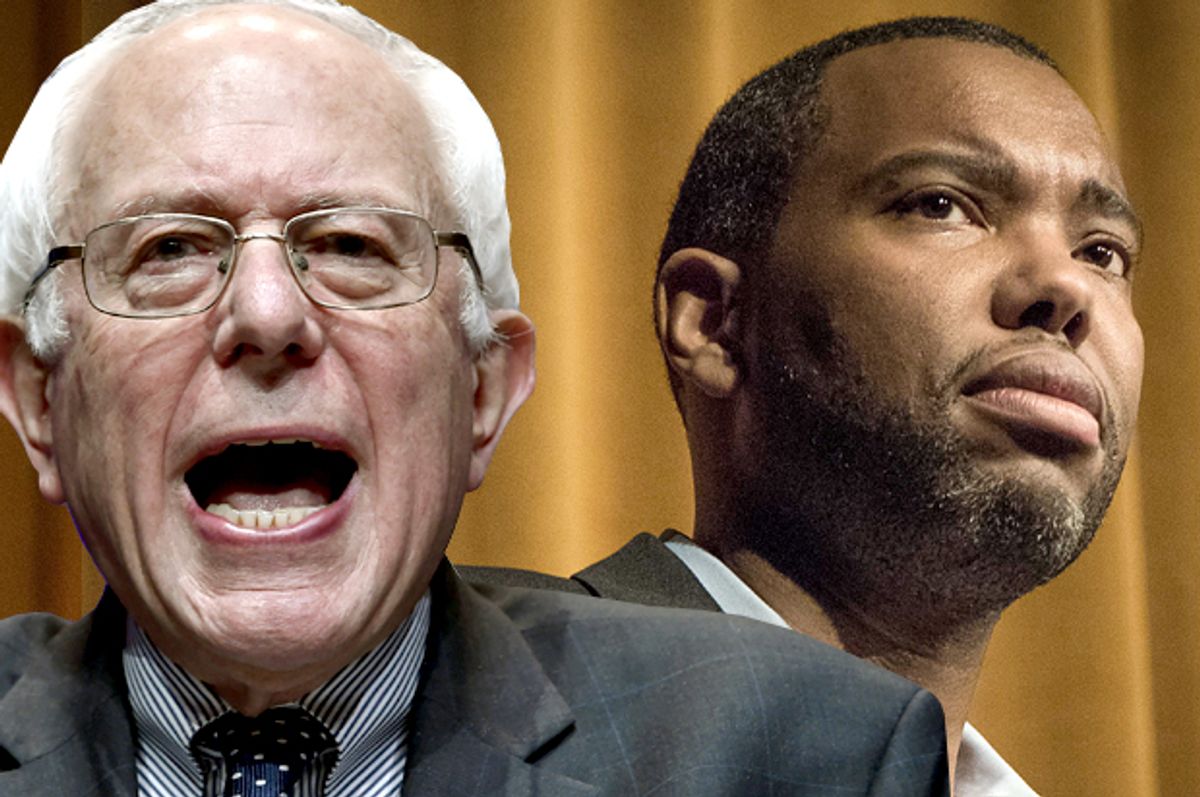 On Tuesday, Ta-Nehisi Coates took Bernie Sanders to task in a widely discussed essay at The Atlantic for declining to support reparations for black Americans.

“No, I don’t think so,” Sanders recently said, when asked point blank if he would support the cause. “First of all, its likelihood of getting through Congress is nil. Second of all, I think it would be very divisive.”

Coates, to say the least, is not satisfied by Sanders' argument that reparations' political odds are too long, calling it “a correct observation which could just as well apply to much of the Vermont senator’s own platform."

"Sanders is a lot of things, many of them good. But he is not the candidate of moderation and unification, so much as the candidate of partisanship and radicalism. [...]Sanders should be directly confronted and asked why his political imagination is so active against plutocracy, but so limited against white supremacy.”

The moral case for reparations is clear: Black people have been robbed for centuries and amends must be made.

The United States has long had a set of policies dedicated to bestowing economic advantage on white people and denying wealth and security to black people, a systematic plunder much more recent than slavery, as Coates and historians like Tom Sugrue and Ira Katznelson (the author of "When Affirmative Action Was White") make clear.

New Deal housing and labor policies systematically excluded black people, who as a matter of policy were denied homes in government-subsidized white suburbs and isolated in segregated cities. Indeed, the political success of these “progressive” policies was made possible precisely because of their racism, which was key to winning the support of Southern Democrats. Black people were thus denied a key wealth-building asset and are to this day relegated in large numbers to separate and unequal public school systems—a system maintained by current policies like exclusionary zoning that keep poor people out of affluent communities.

“We cannot deny that African Americans suffer in this country disproportionately in all areas, whether it's economic, social, political, physical, because of white supremacy,” says former Ohio state Senator Nina Turner, one of Sanders' most high-profile black supporters. “That is in the DNA of this country and we have never fully addressed it.”

Turner, however, sees economic justice and racial justice programs as complimentary. The systematic oppression suffered by black people, as Coates documented in his article "The Case for Reparations," was in significant part effectuated through economic marginalization and dispossession.

Turner points to Sanders' support for raising the minimum wage to $15 an hour, which she says would “help the black family.” She says that Sanders has consistently spoken, including to white people, about the need to “eradicate institutional racism. That statement alone, to a majority white audience, says a lot.”

“Maybe he doesn't call it reparations,” says Turner, but he “talks about institutional racism where he talks about how African-Americans suffer disproportionately.”

Just as economic marginalization was a key tool for maintaining white supremacy, economic justice programs focused on uplifting the poor would have a disproportionately positive effect on black people.

“Studies show that in general, blacks have an unemployment rate consistently about twice that of whites,” journalist Ryan Cooper notes. “Much of that can be chalked up to vast joblessness among lower-class blacks” and so “when a population is clustered at the bottom of the socioeconomic ladder, 'universal' benefits like full employment and government health insurance would necessarily benefit them disproportionately.”

And so Coates is wrong, I think, when he says that Sanders can't make a political case for eschewing reparations because “he is not the candidate of moderation and unification.” Sanders might not be a moderate but he is keenly interested in unifying voters—hence all of the railing against “the top one-tenth of 1 percent” billionaire class.

There is a big difference, history tells us, between the politics of universal economic justice programs that benefit black people disproportionately and those economic programs that are narrowly tailored, or perceived to be narrowly tailored, toward black people. Public housing and welfare were good programs that were viciously attacked and in significant part dismantled because they were painted as handouts for the unworthy (black) poor paid for by the hard working (white) working class. Truly universal programs can win popular support and provide a huge benefit to poor black people in particular—though as I mentioned above, in my discussion of the New Deal, universal programs will not be truly universal if they are conditioned on white supremacy.

Coates is right that economic justice does not solve all of the problems that white supremacy has created for black people. It won't end housing discrimination or school segregation or mass incarceration, though it would likely to some degree undermine all three. As Sanders put in in 1991, government should “demand that every man, woman, and child in this country have a decent opportunity and a decent standard of living” instead of “putting poor people into jail and disproportionately punishing blacks.” (As an aside, although Sanders' track record on criminal justice is better than Clinton's, neither has put forward a program that would actually end mass incarceration.)

Meanwhile, Coates has not backed one concrete program that would qualify as reparations, as Mother Jones' Kevin Drum notes. He includes as one possibility Harvard Law Professor Charles Ogletree's proposal for “a program of job training and public works that takes racial justice as its mission but includes the poor of all races.”

That proposal might sound familiar: Sanders has called for the investment of “$1 trillion over five years to modernize our infrastructure.”

It is important for Sanders to emphasize how a socialist economic program confronts white supremacy and black marginalization—thanks to Black Lives Matter, he has increasingly been doing so. Turner is dismayed that Sanders' campaign didn't return Coates' request for an interview. If they had spoken, she says, they might have found a lot of common ground.