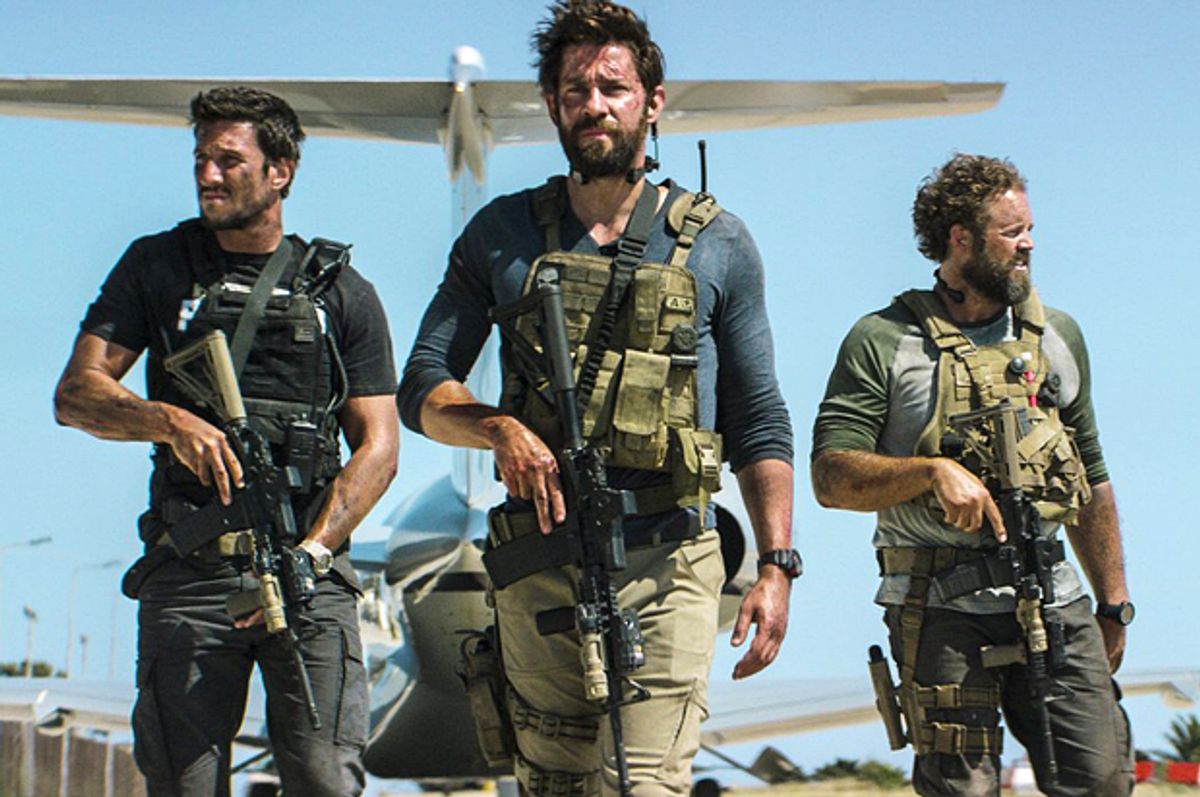 If you should find the need to explain 2016 America to your friends in other lands this week and the phrase "Sarah Palin endorses Donald Trump" is still somehow insufficient, may I suggest, "Woman shot during Michael Bay's Benghazi movie" as a backup?

The Associated Press reports that around 8 p.m. Thursday, police were called to the Regal Cinemas at The Landing in Renton after a patron "appearing to be intoxicated fumbled with a gun" and shot a female audience member in front of him during a showing of "13 Hours: The Secret Soldiers of Benghazi." A witness told KIRO7 News that the man then made another stop.

Witness Fred Granados says he was sitting in a nearby restaurant when a "guy stumbles in, drops a gun on the floor, looks like a .45 semiautomatic pistol. He starts walking to the bathroom and I get up to tell the management, 'Hey, some guy just dropped a gun. A real gun.'

The man then went home, where police say his father called 911 to report that his son "was distraught and had told him he dropped his gun at the theater and it discharged." At least someone in the family was responsible enough to call the cops — you've got to be more than a little concerned about how the shooter actually got home.

The 29-year-old has been since been arrested "on investigation of assault." A hospital spokesperson says the woman, who has not been named, is being treated for a shoulder wound and has been upgraded from critical to stable condition. Moviegoers, meanwhile, are expressing concern that the Regal staff didn't evacuate the entire theater after the incident. One patron said that he left his theater to see "blood on the ground, looked like there was some bandages or something." But police say that the theater wasn't cleared because "the gunman was already gone."

It's believed the shooter and victim didn't know each other, and the incident is, so far, being described as an accident. And that fact that the episode resulted in zero fatalities is, in our current mass-shooting-of-the-week climate, a refreshing change. Yet the reality of just a regular night out at the movies turning into yet another opportunity for some clown with a gun to put a bullet in an unsuspecting bystander is depressing regardless.

How did this happen? Well, Washington state grants gun owners who have obtained a permit and paid a mere $55.25 fee the right to carry concealed weapons. And as the Seattle Times reported in 2014, between 2005 and 2012, the number of residents receiving new concealed-carry permits tripled.

While the spike in numbers is attributable in no small part to women looking for protection, it's also notable that mass shooting spur permit requests as well. The Seattle Times says that after the Sandy Hook mass shooting in 2012, "gun owners in Seattle, King County and statewide did flood in with applications for concealed-weapon licenses" at a rate of nearly double from the previous year. The state ranks fifth in concealed weapon permits, which is great for those nights you feel like having a few drinks and going to see a movie about Benghazi. And don't worry about getting hassled about it, either. As KIRO7 reports, "Last year, Regal Cinemas started checking bags of moviegoers before entering the building after the Louisiana theater shooting" at a screening of "Trainwreck" that left two women dead. Fortunately for the Washington shooter, though, his gun was in his waistband.