The GOP's Trump meltdown hits critical mass -- but can the right's empty suits stop him now?

The right's so-called intellectuals launch a desperate anti-Trump crusade. But who do they think will follow them? 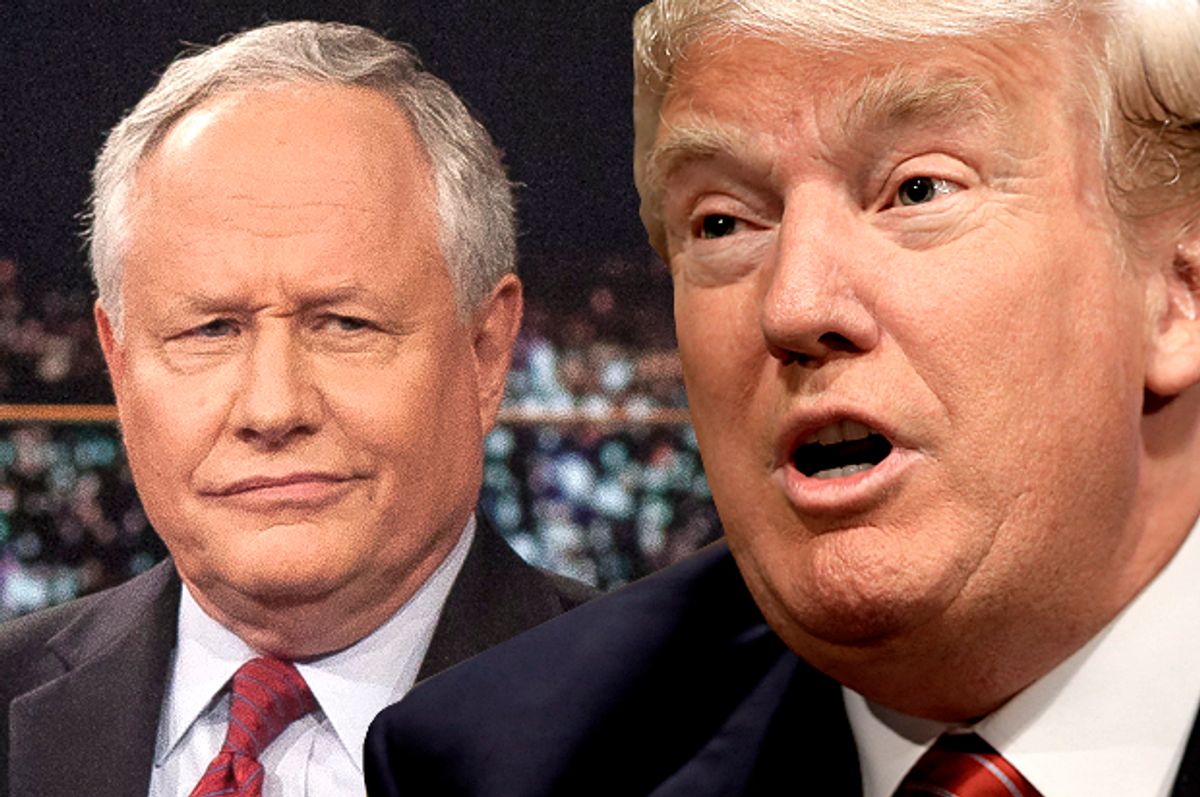 All the anguish, infighting and backstabbing within the so-called conservative movement over the rise of Donald Trump boiled over into the public sphere in spectacular fashion this week. Is this good news for progressives or the left or the Democratic Party (which, despite what the right thinks, are not all the same thing), a delicious spectacle to be savored with hempen bowls of artisanal herbed popcorn? I'm not sure about that; the Magic 8-Ball points to “yes and no.” It’s certainly gratifying to see the self-appointed leadership of the American right get its comeuppance at the hands of the mob it created and empowered. On the other hand, the consequences of that might include mob rule. After shamelessly manipulating and exploiting popular sentiment over many years to gain power, the conservative mandarins have suddenly noticed, just a little too late, that popular sentiment has left them behind. They now find themselves leading a movement without followers, and defending a fortress with no troops.

Even before we get to the National Review’s pathetic-heroic last stand in this week’s “Against Trump” cover package — and what a strange and anguished testament of conservative conscience that is — we had a blithe but plausible New York Times report about the 2016 dilemma that has split the GOP rulership caste into warring camps. Republican apparatchiks and thought-leaders are faced with two unpalatable nominees, or so the narrative goes: One is a megalomaniacal billionaire with no discernible principles or guiding ideology, running on an incoherent laundry list of populist themes that shifts from day to day. The other is an authentic “movement conservative” who is beloved by the Tea Party faithful, and who may also be the most universally despised person in Washington. (Which is, of course, the source of his popular appeal.)

Some prominent conservatives, according to the conventional wisdom of the moment, have virtually thrown in the towel on the 2016 election, in January. Now they’re just trying to figure out what version of losing to Hillary Clinton will be least damaging to their long-term job security. There are several things to say about this hypothesis, even beyond the obvious fact that nothing about its existence reflects a healthy or functional democracy. It’s also the sort of media meme that’s almost certainly not true, created and reinforced by journalists and political insiders eager to congratulate themselves for understanding events more than they do. Those are the same people who repeatedly assured us, until very recently, that Jeb Bush had found a new tone and struck a new rhythm, and would be mounting his big comeback at any moment.

Many of the Republicans currently beating their breasts and rending their garments will feel differently come August or September, after their party has presumably nominated someone and after polls begin to show—climbing out on a limb here!—a tightening race likely to be decided by turnout in Ohio and Florida. According to the Newtonian physics of political blather, all the confident pronouncements that Trump or Ted Cruz cannot possibly win the election will produce a raft of equally confident articles explaining how they can and how they will. There is ample time for all your Facebook friends to indulge in multiple waves of panic, and for aspiring Clinton appointees to conclude that they should hold off on those nonrefundable hotel reservations for Inauguration Day just a bit longer.

Indeed, as Hillary Clinton is herself discovering, the same internal dynamics of popular discontent and elite disconnection that are devouring the GOP are also bubbling up within the Democratic Party, perhaps in more attenuated form. As I have previously argued, Republican self-destruction does not necessarily lead to a stable and glorious era of Democratic hegemony. The way things look right now, it seems far more likely to produce chaos. Our entire system of partisan politics has been corroded and corrupted, and if the 2016 campaign has told us anything, it has told us that the people have noticed. It would be fatal hubris to assume that the toxin that kills one party will spare the other.

So when I read through National Review’s barrage of “Conservatives Against Trump” broadsides, a collection of mini-essays from miscellaneous haters with little else in common, I didn’t just notice the desperation, the flailing, the misplaced snobbery and self-righteousness, or the pervasive sense of abandonment and bewilderment. All of which were considerable: Trump was variously compared to Hitler, Mussolini and Barack Obama (I’m not sure who’s supposed to be worse); derided for his outer-borough accent and the vulgar design of his casinos; accused of being a phony conservative and a phony Christian (guilty as charged) and described both as a hateful racist and a stealth advocate of illegal immigration.

But when you get past the outrage, anger, betrayal and name-calling, you get to the unexpected but powerful nuggets of truth. To a significant degree, the National Review roster of right-wing philosopher-kings perceive that the jig is up, not just in terms of the 2016 nomination but in terms of the entire jury-rigged Frankenstein apparatus of the Republican Party. For at least the last several decades, the American right has been an unstable coalition whose factions were never in perfect alignment and often had areas of fundamental disagreement. There wasn't much beyond political expediency, Cold War paranoia and antipathy toward 1960s-style Great Society liberalism that ever bound the small-government libertarians to the foreign-policy neoconservatives to the capitalist oligarchs in the first place, and that's before you factor in the evangelical Christians and the Tea Party and the other cause-driven bands of rebels who have pushed the party ceaselessly to the right.

Whatever else Trump has done, or may do, he has blown that coalition apart, and all the “Against Trump” rhetoric about the common core values of conservatism cannot stitch it back together. There is an unwholesome stereotype at work in American society, nervously admits Michael Medved. It holds that “conservatives are selfish, greedy, materialistic, bullying, misogynistic, angry, and intolerant. They are, we’re told, privileged and pampered elitists who revel in the advantages of inherited wealth while displaying only cruel contempt for the less fortunate and the less powerful.” This is not true, of course, per Medved, but Trump and his followers sure might make it seem true.

Some of the assembled conservatives attack Trump in language worthy of the left at its most heated. Novelist Mark Helprin calls him “a tapeworm invading the schismatically weakened body of the Republican Party,” and after a labored comparison with Allah in Islamic theology (!) adds that Trump “doesn’t know the Constitution, history, law, political philosophy, nuclear strategy, diplomacy, defense, economics beyond real estate, or even, despite his low-level-mafioso comportment, how ordinary people live.”

Other panelists, especially the handful of younger voices, barely sound critical of Trump at all. They’re more rueful that he has exposed their entire enterprise. Conservatives have more to learn from Trump’s success than they migh like to admit, writes Ben Domenech. “The Trump voter is moderate, disaffected, with patriotic instincts. He feels disconnected from the GOP and other broken public institutions, left behind by a national political elite that no longer believes he matters.” I have no idea what Domenech thinks he means by “moderate,” but otherwise that’s on the money.

Theologian R.R. Reno, who edits a magazine called First Things, goes further. “The Republican Party has become home to a growing number of Americans who want to burn down our political and economic systems and hang our cultural elites,” he writes. “They’re tired of being policed by political correctness, often with the complicity of supposed conservatives. … And they suspect, rightly, that the Chamber of Commerce will sell them down the river if it adds to the bottom line. The middle-class consensus in America has collapsed. This is the most important political and social earthquake since World War II. The conservative movement’s leadership isn’t up to the challenge, and a good number of voters are willing to gamble on Trump’s bluster.”

Right-wing heavy hitters like Bill Kristol and John Podhoretz aren’t having any of this Marxist self-criticism, mind you. Podhoretz describes the potential election of President Trump as “the worst thing to happen to the American common culture in my lifetime.” Kristol actually ends his entry by wondering whether it is “the task of conservatives today to stand athwart Trumpism, shouting Stop.” Yes, he said “athwart.” Why National Review editor Rich Lowry believed that one more counterattack by power-suited, think-tank Washington Republicans—exactly the establishment Trump and his supporters despise and reject—would accomplish anything beyond pouring more fuel on the bonfire is anyone’s guess. Trump responded by mocking the magazine as the failing voice of a bygone generation, and it’s hard to argue with that. When I visited National Review’s website and then navigated away, a pop-up ad appeared, offering me a one-year subscription—free.