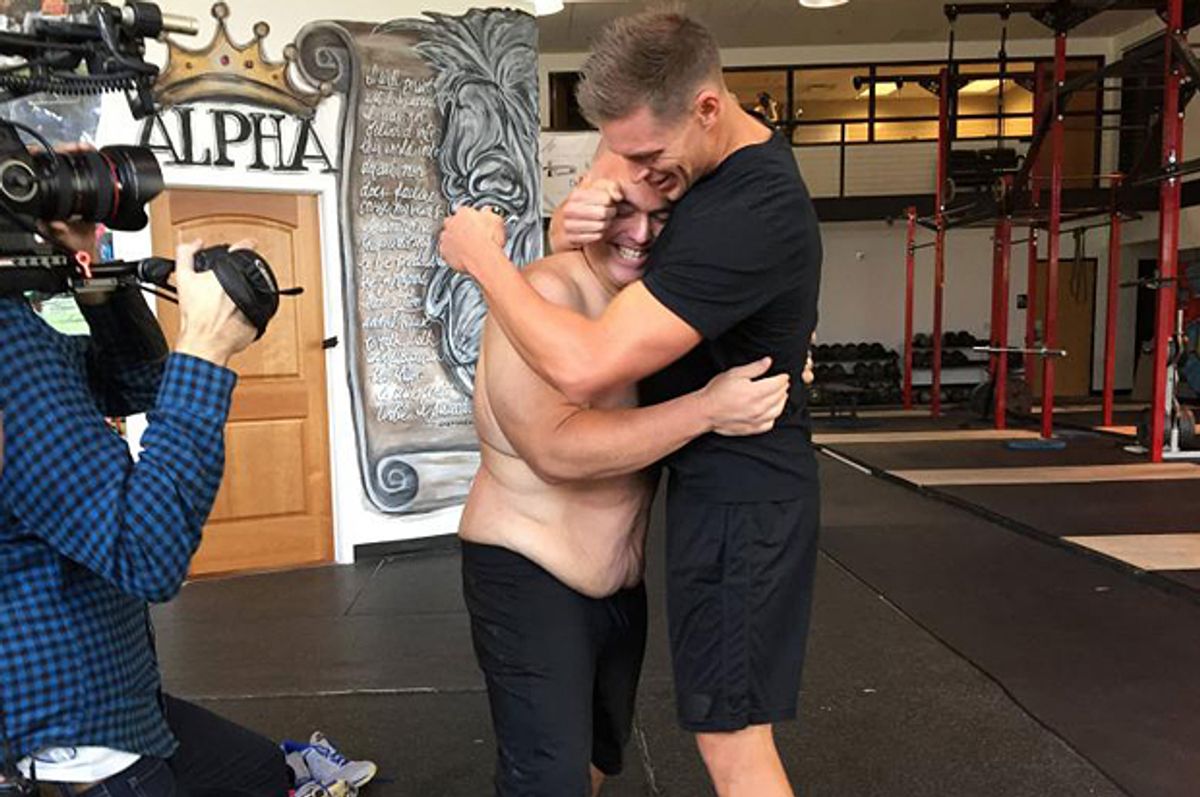 “Finally, trainer & client are on the same playing field.” That’s how A&E is presenting its new reality weight loss show “Fit to Fat to Fit” via Twitter. The premise is that personal trainers gain weight so they can better understand and empathize with their clients, inspired by trainer Drew Manning’s similar experiment, which he documented in his book "Fit2Fat2Fit."

Each episode features a new trainer and client, cramming their eight months of working together into one hour’s viewing. The opening credits of the first episode, which aired this week, tell us that trainer “JJ is participating in an experiment to learn what it’s like to be fat.”

There’s a lot of flawed thinking presented on the show, but what stood out the most for me is the basic core of this idea: that people whose job is to be physically fit can ever “learn what it’s like to be fat”—especially by deliberately gaining 60 pounds in four months, as happens in the first episode, which viewers are warned not to try at home. (Trainers are under medical supervision while gaining the weight.) Wrong. What they’re learning is what it’s like to artificially gain an unhealthy amount of weight by gorging themselves on calorie-rich foods in a short time period for the purpose of a ratings gimmick. We see a burger the size of a dinner plate land in front of JJ, and other scenes of him eating other extremely huge portions, sometimes lustily, sometimes as if in agony. It’s clear that he’s eating because he “has” to.

The show spends about half the episode focused on the difficulties JJ faces gaining the weight, a major clue that this is not going to actually level the playing field. In the name of supposed empathy, we hear JJ say things like, “It makes me feel fat and sad. Is fat an emotion?” and, when his wife asks what he’s doing lying down on the floor, saying, “Just trying not to die.” He comes closest to empathy with, “You do feel trapped. I feel for people who are struggling with weight.”

During one of the show’s most ridiculous moments, we see JJ sitting down for dinner with his wife and saying, “For years and years and years, we’ve been on the same page. And now it’s, I bring home my cheeseburger and she’s eating her salad and we don’t have anything to talk about.” Because fat and thin people of course have nothing to talk about.

That only makes sense if we accept the show’s basic belief that “fit” and “fat” are not separated by just one letter, but by a chasm so vast there’s no way to bridge it except to leap from one category to the next. There’s never a mention of the fact that it’s possible to be both fat and fit (or a fat professional athlete), or that “fit” is not just something you can assess by stepping on a scale. Instead, fat is presented as something the trainer can simply choose to be or not to be, and that by its very nature, it will instantly make anyone miserable.

Food is presented as either temptation or torture. JJ seems reluctant to keep on eating at times, although he admits that some of the unhealthy foods he’s eating are indeed delicious. In a podcast interview with Manning, who’s also a producer of the show, JJ revealed that he even enlisted his children when he was working on gaining the weight. Of his 3-year-old daughter, he said, “She helped me with some of my doughnut eating challenges. At doughnut No. 3 for her, she was feeling the pain I was feeling, so she was on the verge of tears and then she entered the food coma state and then she woke up nauseous and threw up. So it was good for her to see that this food is not as fun as it looks.” How is this something we should be applauding? Why do doughnuts have to be something that are either gorged on or avoided?

It quickly becomes clear as the show focuses as much time on trainer JJ’s overeating in order to gain the weight as it does on client Ray’s weight loss journey that the real subtext is just how uncomfortable JJ is with his own body being anything but what he deems perfect.

As if channeling Nicole Arbour, whose “Dear Fat People” video went viral last year, fatness is presented as solely an issue of lifestyle and willpower; genetics get no mention. We find out from a voice-over that “JJ is going to throw away years of fitness to adopt the diet and lifestyle of his new client, Ray.” What is that lifestyle? The camera is quick to show us a montage of Ray eating gluttonously—pizza, sandwiches, waffles, takeout. We get three extreme close-ups of Ray eating a hamburger, followed by Ray’s concerns that his weight will be an impediment to being picked as an adoptive parent.

The show never once pushes back at the idea that it’s OK for Ray to be discriminated against because he’s fat, even though we know that fat people face workplace discrimination, and that fat shaming can actually have the effect of making people gain more weight. But in the ideology of the show, fat is bad and fit is good, and they take pains to show all the ways this is true, suggesting, without outright saying so, that once Ray loses weight everything else in his life will magically fall into place.

We’re shown a preview from the next episode where a woman says, “If you have never been this overweight, you can’t even imagine how hard it is for us to lose weight.” If that’s the case, that’s a problem—but not one that will be solved by manipulating trainers’ minds and bodies in ways that are completely unrealistic and possibly dangerous. These trainers aren’t actually finding out all the hardships fat people face. They may believe they’re gaining empathy, but it’s completely fabricated.

Of course I understand why it would feel good to have a trainer willing to deliberately defy their usual lifestyle in order to experience a bit of what their clients go through. On the podcast, Ray, the client on the first episode, said JJ's gaining weight made a “huge difference” for him, and that “when I was finally turning away from the demons that accompany obesity, he was suddenly facing them head on, and that made a huge impact for me.” But it’s insulting to hear JJ say on the show, “I’ve gotten the smallest glimpse of what it’s like to be Ray.” He may think he has, and may want to empathize with him, but he’s still coming from a lifetime of being physically fit and active, free of any kind of fat stigma, that Ray simply hasn’t had.

JJ was not, in fact, facing the same demons Ray was. One could argue he was facing his own demons, his professed fear that he’ll enjoy junk food too much and not want to lose the weight, but those are his own issues, and are not akin to what someone like Ray has to deal with. Fitness writer James Fell polled people who’ve dealt with obesity to find out their reactions to the show’s premise. Their answers included: “Being overweight for 6 months would maybe give you an idea of feeling deprived during initial weight loss. HOWEVER no real clue how it feels to be bullied as a child or constantly self-doubting all through your formative years and into adult hood, or the trials of dealing with eating disorders and emotional eating issues.” And “This is a stunt and I feel like it's just another way to guilt the obese person involved. As in.. look I gained this weight and now you have to lose it because I got fat for you. Messed up. Also it just physically isn't the same. The underlying musculature and strength may decrease but it sure as hell isn't going to vanish over the course of the weight gain.”

As Fell points out in an article calling the show “fat-shaming,” he writes, “Also left out is the understanding that Ray may not maintain his weight loss, and what the crushing result for his psyche will be if he doesn’t. Having lost it so publicly, and having his trainer go through ‘hell’ for him, it will be a major blow to Ray if he doesn’t beat the odds and keep this weight off.”

If trainers need to undergo a dramatic weight-gain stunt to empathize with their clients, we as a culture have a much bigger problem than anyone on this show. Must one have to live like someone else in order to listen to them and try to understand what they’re going through?

Plus, it’s simply not true. As one of Fell’s respondents wrote on Facebook, “The team of professionals that helped me lose 185 lbs are all lifelong slim people. My exercise physiologist is a lifelong fitness enthusiast type. And they couldn't be more compassionate, caring & understanding of the struggles we have gone through & continue to go through. Without having been overweight, and acknowledging that, they all manage to provide us with the counselling we need to succeed.”

I hadn’t even heard of this show until my boyfriend and I saw an ad for it. He’s been fat his whole life, and was immediately offended. “That’s not the same thing at all,” he said, and he’s right. I live with him, and even I don’t know exactly what it’s like to face the kinds of looks, judgments, platitudes and hostility he deals with because of his weight, so how can we expect that these trainers will truly be able to approach their clients as equals in their weight loss struggle?

The show purports to create sympathy among the trainers for fat people, but that seems to quickly devolve into self-pity, and creates a false narrative about what being fat actually means. For example, Bonnie Pfiester, wife of trainer Steve Pfiester, who will appear on an upcoming episode of "Fit to Fat to Fit," wrote of his weight gain: “Steve was too tired to help around the house. He became lazy and sloppy. He’d leave dishes and proof of his feedings, like Rice Crispy Treat wrappers, laying around for me to pick up.” His abrupt change in behavior, I would venture, isn’t because he's fat, but because he’s forcing his body to play catch-up with his overconsumption.

Pfeister’s own unhappiness at his supercharged weight gain led him initially not toward empathy, but a much darker mind-set: “He became enraged in his heart when he saw obese people scooting around stores in their personal scooters and watching them stand in line for fast food. Of course he can’t possibly know what that person has gone through, but as he’d watch someone who needed to be on a diet order a biggie size meal with a shake, it was easy to assume that they were just making poor decisions.”

The post concludes that by the end of his time taping the show, “It didn’t seem to matter who was the trainer or the client. The struggle was just as real for both of them.” Yet how can it possibly be the same when the trainers are forcing themselves to eat in a way that makes them feel physically ill and mentally troubled, and the security of knowing they have a history of fitness to fall back on?

Bottom line: A good trainer shouldn’t need to perform a dangerous stunt to help their clients, and it’s insulting to people of all sizes for them to pretend that they can gain a lifetime of understanding simply by overeating for four months. The clients on the show, and A&E viewers, deserve better.