"Star Wars" fans, unite: The only way to fight #WheresRey trends is to stop buying the toys 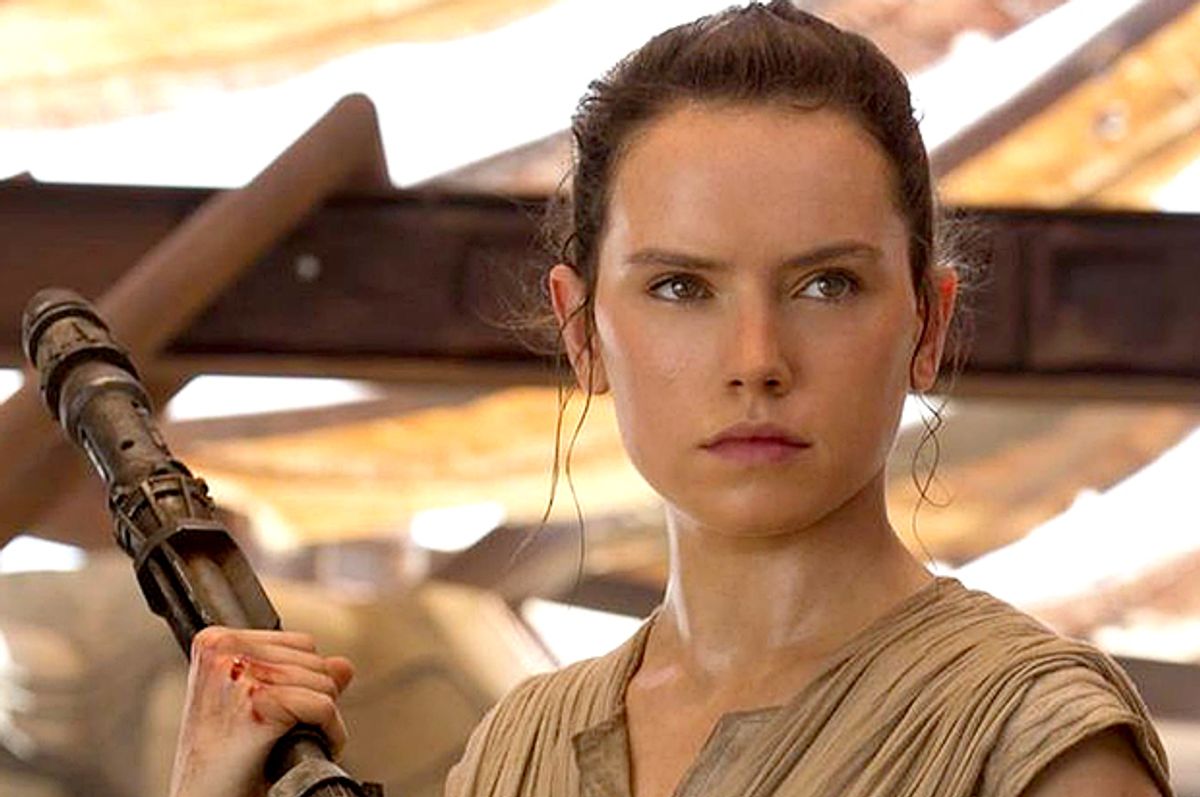 After it became apparent that the character of Rey had been excluded from game sets for “Star Wars: The Force Awakens,” critics quickly accused Lucasfilm – which was purchased by Disney in 2012 – of making sexist assumptions when developing its product line. Although Hasbro denied these claims in a statement to Entertainment Weekly about their “Star Wars Monopoly” game, an anonymous industry insider recently revealed the ugly truth to the culture blog Sweatpants & Coffee. “As the meetings wore on, one or more individuals raised concerns about the presence of female characters in the 'Star Wars' products,” writes Michael Boehm in his report of a conference that took place in January 2015 with toy and merchandise vendors at Lucasfilm’s Letterman Center. “Eventually, the product vendors were specifically directed to exclude the Rey character from all 'Star Wars'-related merchandise, says the insider. ‘We know what sells,’ the industry insider was told. ‘No boy wants to be given a product with a female character on it.’”

This echoes the observation made by another anonymous Disney employee (one who used to work for Marvel), who describes in The Mary Sue that their company refused to include female characters in its superhero merchandise because “that’s not why Disney bought us. They already have the girls’ market on lockdown.” While it may be tempting to assume that this reasoning is purely financial in nature, that assumption doesn’t hold up to much scrutiny. After all, anyone who didn’t live under a rock for the past few years will recall how, when the animated film "Frozen" became an international hit in 2013, young boys joined young girls in singing cover versions of the movie’s hit songs, dressing up as its major female characters, and (of course) buying toys and other related merchandise. This is because, despite what toy manufacturers like to claim, there is no reason to believe boys and girls won’t play with the same toys… that is, unless they’re told that they’re not supposed to.

“In my research on toy advertisements, I found that even when gendered marketing was most pronounced in the 20th century, roughly half of toys were still being advertised in a gender-neutral manner,” writes Elizabeth Sweet, a professor of sociology at the University of California–Davis, in The Atlantic. “This is a stark difference from what we see today, as businesses categorize toys in a way that more narrowly forces kids into boxes.” The reason for this change, explains Rebecca Hains in The Boston Globe, can be traced back to the 1980s, “when the Federal Communications Commission’s television deregulation removed longstanding limitations on children’s advertising… As a result, marketers suddenly viewed children as a segmentable, highly lucrative demographic after largely ignoring them for 50 years.”

This explains not only Rey’s absence from "Star Wars" toy sets, but various other omissions that have drawn the ire of social progressives in recent years. Although women comprised 44 percent of the audience for the 2014 blockbuster "Guardians of the Galaxy," the female character Gamora was conspicuously absent from the vast majority of their toy, T-shirt and costume merchandise. The same thing happened again last year with "The Avengers: Age of Ultron," when the female superhero Black Widow was likewise left out of most of the film’s merchandise. In fact, LEGO and Hasbro even replaced Black Widow with Captain America in one of the most iconic scenes from the film – one in which the former assassin is dropped from the Quinjet on her character’s distinctive motorcycle.

There is more at stake here than the mere desire for faithfulness to the source material. “Boys and girls stop playing together at a much younger age than was developmentally typical until this recent gender segmentation,” writes educational consultant and psychologist Lori Day in her book "Her Next Chapter: How Mother-Daughter Book Clubs Can Help Girls Navigate Malicious Media, Risky Relationships, Girl Gossip, and So Much More." “The resulting rigidly stereotyped gender roles are unhealthy for both males and females, who are actually more alike than different.”

John Marcotte, founder of the non-profit feminist organization Heroic Girls, made the same observation, noting that “these gender divisions are hard-coded into their toys and it informs their behavior in ways that has lasting results on their presumptions.”

In short, even though Disney and its allied toy manufacturers would like us to believe that boys simply won’t buy toys that have girls on them, the circumstantial evidence suggests that ideology is playing a bigger role than fiscal pragmatism here. Because the executives personally believe that boys’ toys and girls’ toys ought not to mix, they are ignoring the history of their own industry, recent developments like the "Frozen" phenomenon, and the widespread outrage over the omission of major female characters from their product lines.

If this isn’t a good reason to boycott their merchandise, I don’t know what is.

This may sound like a bold suggestion, but it actually makes a great deal of sense. If you’re a parent who wants to raise future men and women who respect individuals of the opposite gender, then it is necessary to avoid inadvertently promoting gender segregation through your consumer patterns. Your children can still watch and fall in love with movies like "Guardians of the Galaxy, "The Avengers: Age of Ultron" and "Star Wars: The Force Awakens" (all of which I’ve personally seen and enjoyed), but it is hardly necessary for them to own all of its affiliated merchandise. Indeed, at a time when large corporations have unprecedented influence over how we think and live, this would be a perfect opportunity to separate our youngest generation from one of the more sinister ways big business can negatively impact their lives.

Similarly, adult geeks who love Marvel or Star Wars have an ethical responsibility to condemn these practices, too. In the character of Rey, "Star Wars: The Force Awakens" created a strong female protagonist in a franchise that was notoriously male-dominated in the original trilogy (aside from Princess Leia, female characters had only 63 seconds of speaking time in the 386 minutes of the first three films). Although Gamora and Black Widow weren’t nearly as prominent as Rey in their respective movies, they were still hard-hitting action heroes who were the center of major set pieces during their films. Considering how much nerd subculture values completionism, the need for accuracy alone should dissuade any true geek from purchasing merchandise that doesn’t include the major female characters alongside the male ones. That said, adult consumers are morally responsible for the patterns they reinforce through their spending choices. If you are aware that women are being discriminated against in your favorite franchises and you choose to patron them anyway, you are part of the problem.

For what it’s worth, I’m not too pessimistic about the future of female characters in toy and other merchandising properties. My guess is that, as the outrage over exclusionary practices continues to build, both Disney and toy companies will realize that there is more money to be made by including everyone than by kowtowing to their own reactionary beliefs. In order for them to reach that conclusion, though, consumers will need to start hitting them where it hurts the most… in their wallets.