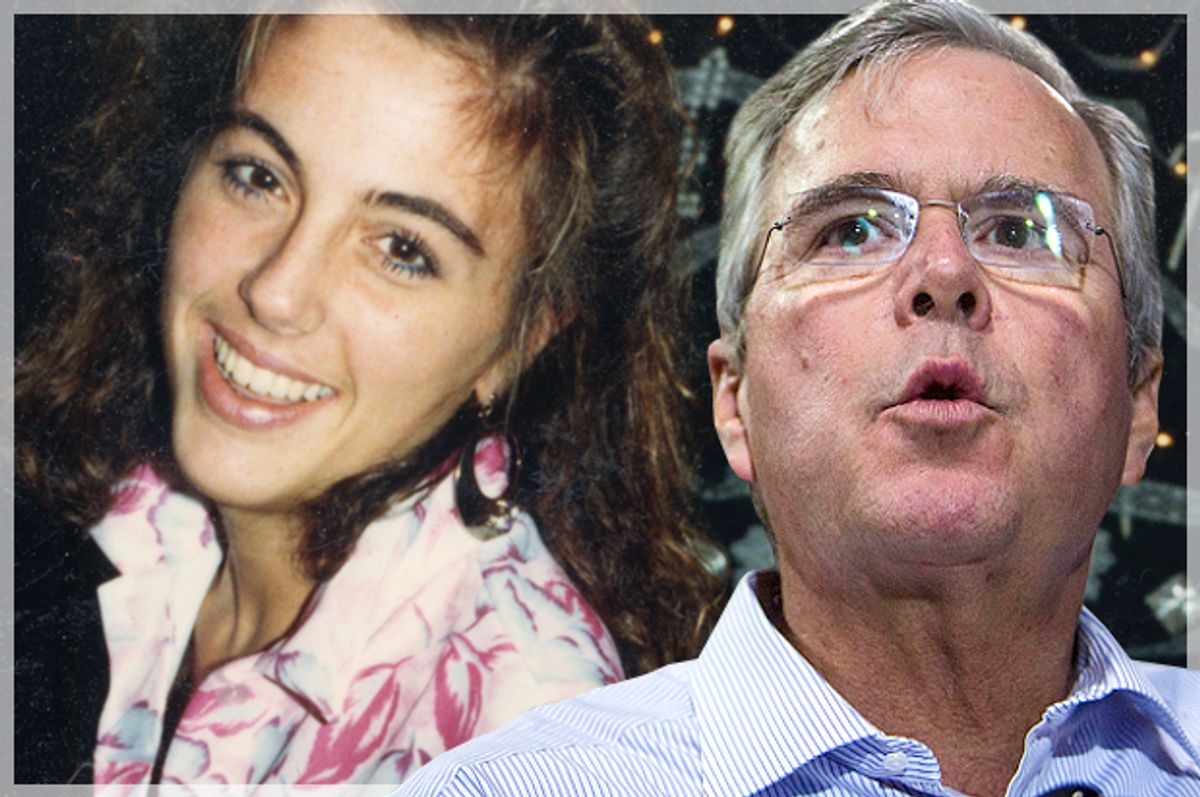 In case you've been so wrapped in following the train wreck of whiny little baby man Donald Trump to remember how, in their own special ways, the other Republican presidential candidates are also repugnant, along comes Jeb Bush to remind us. Nothing like standing tall on a merciless commitment to so-called "life" and dredging up other people's legitimate pain in a futile quest to get the job daddy and big brother had to seal your reputation as an awful person.

An appalling ad created by the super PAC Right to Rise that's currently running in South Carolina boasts that Bush is "a man of deep faith, who fought time and again for the right to life." And among the images accompanying the words is a photograph of Terri Schiavo. It's an inclusion the late woman's husband Michael calls "simply disgusting."

For fifteen years — between 1990, when the St. Petersburg woman fell into a coma, and 2005, thirteen days after her feeding tube was removed and she died, Schiavo was at the center of a deeply divisive battle over death with dignity. On opposing sides were her husband, who insisted she would not have wished to be kept alive artificially, and her family, which maintained her religious beliefs would have forbidden any potentially life-ending interventions.

By the time the case had moved into its second decade, one Bush was in the White House and another was the governor of Florida, and the case had become not just a bitter and anguished family dispute but a hot button political issue. In 2003, the state legislature passed what it called "Terri's Law," granting the governor himself the right to order Schiavo remain on life support. It was struck down as unconstitutional in 2004, but it would take nearly another year — and legal wrangling that went back and forth to the very end — before Schiavo was allowed to die. She was 41, and had spent more than a third of her life in a vegetative state. A coroner report  noted her 1.35 pound brain was "profoundly atrophied," and that "no amount of therapy or treatment would have regenerated the massive loss of neurons."

Yet the fight over Schiavo's life — and its ending — has gone on, even in the more than ten years since her death. Last March, Schiavo's brother described her in a feature for LifeNews as a woman "who simply had a disability and needed basic and ordinary care to live, and a family who wanted to love and care for her just as she was," and vowed to assists others with "loved ones in danger of being killed, like Terri." Schiavo, meanwhile, told Politico last year that Jeb Bush made his life for years "a living hell, and I blame him." He added, "He should be ashamed. And I think people really need to know what type of person he is. To bring as much pain as he did, to me and my family, that should be an issue."

Echoing that sentiment again now, Schiavo tells Buzzfeed, "“It is simply disgusting that Jeb Bush and his super PAC would exploit my wife’s tragedy for his crude political gain. Shame on Jeb Bush. Using his disgraceful intervention in our family’s private trauma to advance his political career shows that he has learned nothing."

Life isn't life when you can't swallow food on your own, when your brain weighs less than half of what a normal adult female's should. Being in a coma for fifteen years is not simply having "a disability." But though the new ad is dredging up painful memories for Schiavo now, at least he hopes it can be instructive. "What the campaign video shows is that if he ever got his hands on the power of government again, he would do the same thing again," he says, "maybe next time to your family."