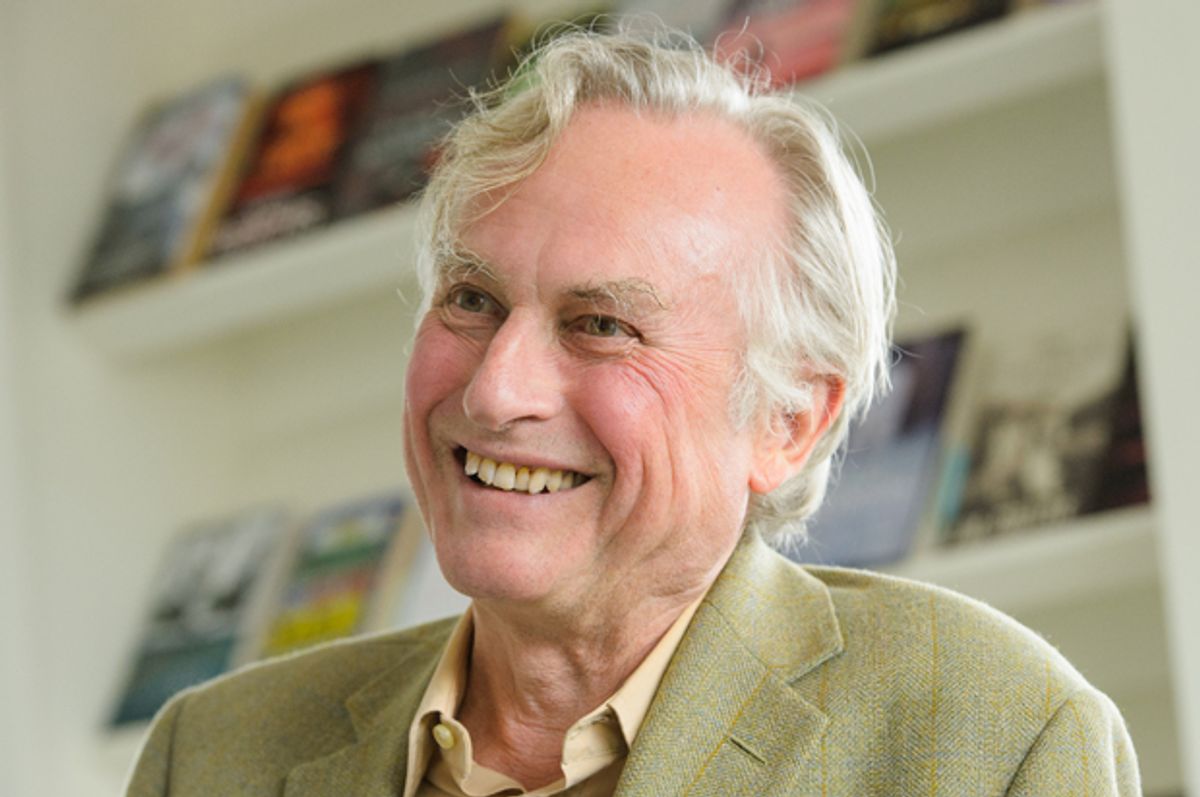 Between Kanye, B.o.B., and Rob Lowe, you'd think it'd be hard to pick who's trolling Twitter the hardest this week. Fortunately, that's what Richard Dawkins is for.

Dawkins, a provocative scientist, author and thinker who at one time people actually took seriously, has over the past few years evolved into a round the clock bigot. And hey, business is generally good — being a fan of Dawkins makes other bigots feel like they're sophisticated and not, you know, bigots. Dawkins himself sets the tone, humble bragging, "Sorry if I go a bit over the top in my passion for truth" while he snarks on "good Muslim" women, shrugs off "mild pedophilia" and yells at clouds.

Earlier this week, Dawkins fancifully linked to a YouTube video called "Feminists Love Islamists." In the two minute cartoon clip, a redhead in glasses and a grating voice does a piano duet with a Middle Eastern male. Imagine Mark Russell, but somehow worse. In it — and if you decide to watch it just remember you'll never get those two minutes of your life back — the two whine-sing of how disempowered they are, and then it ends with the man asking, "So do you mind if I rape you now?" The woman replies, "Don't be silly; it's not rape when a Muslim does it!" This is what Richard Dawkins apparently finds entertaining.

Making the matter even more offensive, if possible, is that as writer Lindy West and others have noted, the cartoon female is modeled after a real woman who was targeted for doxxing, rape threats, and death threats after speaking up at a 2013 Men’s Rights group event in Toronto.

When confronted on Twitter with that information, Dawkins initially declared, "I think she deserves nothing more than ridicule. I would never shriek 'F__kface' at her. But I would laugh at her. Ridicule." He did however later concede that "Obviously it is utterly despicable to send rape or death threats to anyone, however stupid & rude." He added, "PLEASE PLEASE PLEASE don't EVER threaten anyone with violence. We should be free to use comedy/ridicule without fear it may inspire violence." He then deleted the original tweet, but of course because this is Dawkins, he can't be mistaken about anything. So instead he said, "I deleted it because I was momentarily persuaded, probably wrongly, that a human life (however vile) might be threatened."

Then, in an interesting turn of events, the Northeast Conference on Science and Skepticism announced that it "has withdrawn its invitation to Richard Dawkins to participate at NECSS 2016. We have taken this action in response to Dr. Dawkins’ approving re-tweet of a highly offensive video." It added that "We believe strongly in freedom of speech and freedom to express unpopular, and even offensive, views. However, unnecessarily divisive, counterproductive, and even hateful speech runs contrary to our mission and the environment we wish to foster at NECSS," and offered full refunds to anyone who wished one. The conference is scheduled for May.

Dawkins, naturally appalled that he could experience any consequences for his actions, responded in surprise, "De-platformed for tweeting an irreverent joke song?" he wrote. "Ah well, 'Always look on the bright side of life.' Incidentally, would Monty Python have been de-platformed for that? No, don't be silly, Life of Brian was only satirizing Christianity."

It's nice that he thinks a video that he now knows full well takes aim at a real, living woman — "however vile" he may find her — is just "irreverent." And if you think the guy who made it is anywhere the same league as Monty Python, your sense of comedy must be profoundly undeveloped. Dawkins is also now gleefully retweeting those who observe "The woman in question is a Lovecraftian horror. No apology," and ask, "Where is the proof/evidence of threats and violence? How do we know it's not just a fabricated story?" By the way, this looks like proof to me.

The Twitter cliche is that RTs aren't endorsements. But if you're Donald Trump and most of your RTs are from white supremacists, or you're Richard Dawkins and you're revealing how hilarious you find rape jokes about real women, maybe they are. And while you have a right to share those things, it doesn't mean other people can't decide they don't want you at their events. Maybe they're afraid it'd seem like an endorsement.