Amber Rose slams sexist double standards: "When I went on a date, I’m a whore, and when he’s piling girls in a car, he’s the man?"

After Kanye's meltdown, the former stripper continues shut down the shamers 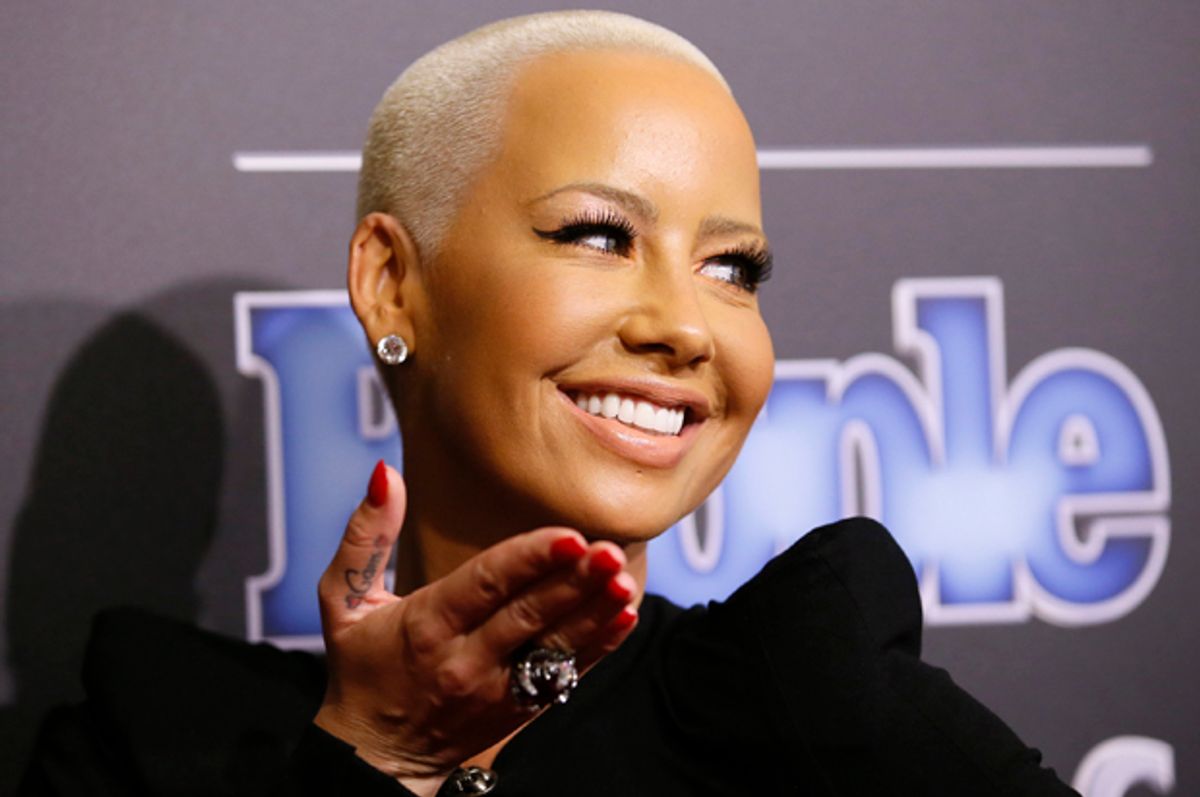 All praise be to Amber Rose this week, for taking an ex-boyfriend's idiotic — and grossly sexist — twitter meltdown and turning it into a teachable moment.

On Wednesday, Kanye West went on a weird and, at times, highly entertaining social media rampage at his fellow musician Wiz Khalifa. But while Twitter without beef would be like Peter Luger's without beef, where West went next level was in using Amber Rose — a woman that both men have had relationships with — as a point of attack. "You let a stripper trap you," he wrote, "I know you mad every time you look at your child that this girl got you for 18 years… You wouldn’t have a child if it wasn’t for me." Khalifa has a young son with his estranged wife, model Amber Rose, who dated West several years ago. And the 32 year-old Rose happens to have spent a decade of her early career as a stripper.

Rose has never made a secret of her past, or expressed regret about it. Speaking with Cosmopolitan last year, she said of her years as a dancer, "That was the best time of my life! Oh my god, I had so much fun." Nor did it seem to bother West for two years they were together. But now that he's married into prominent Amish family the Kardashians, he seems to feel a little more morally superior, hurling the word "stripper" as if it's a derogatory term, implying Khalifa must harbor regret for fathering a child with one. Last year, West also mentioned his newfound disdain for his ex, saying he "had to take 30 showers before I got with Kim."

Rose, however, isn't having it. After West's insults, she showed up on Twitter with a reply that alluded to such a specific sexual preference that by Friday, #KanyeAnalPlaylist was trending. (Kanye, for the record, says, "I stay away from that area all together.") But Rose went further, taking the incident as a chance to talk about a subject dear to her heart — slut shaming. Writing in Time this week, she noted that now that's she's single again, she and her ex husband are subject to different standards of behavior. "When I went on a date, I’m a whore, and when he’s piling girls in a car, he’s the man?" she wrote. "There’s something wrong here." And she says that though she "used to feel like I had to explain that maybe it was because I’m a good person," she's over it, and, "If you don’t like it, I don’t care."

Rose, who told Cosmo last year that her experiences on social media had "did help create the feminist monster that I've become," has in just the past year become an anti-shaming force to be reckoned with — and she's done with her own cheeky sense of sass and humor. Last spring, she told the haters in no uncertain terms they can "Kiss my MILFY ass bitches." In August, she showed up with Blac Chyna at the VMAs in outfits boldly emblazoned with sexist slurs. In September she appeared in a Funny or Die clip celebrating the "walk of no shame." In October she led a Los Angeles SlutWalk. And now, speaking for the "Allegedly" podcast airing Friday, Rose talked about West's meltdown, and asserted, "I would never talk about kids in an argument. It just shows what type of person he is…. You took me around the world, we dated for, like, two years, but you're talking s__t about Wiz and my baby. Don't talk about my baby." Unlike West, Rose wouldn't stoop to that. You know why? Because having integrity has nothing to do without how much -- or how little -- clothing you wear.