Rabin's death was Netanyahu's victory: An explosive new film argues that Bibi is morally culpable for the 1995 assassination 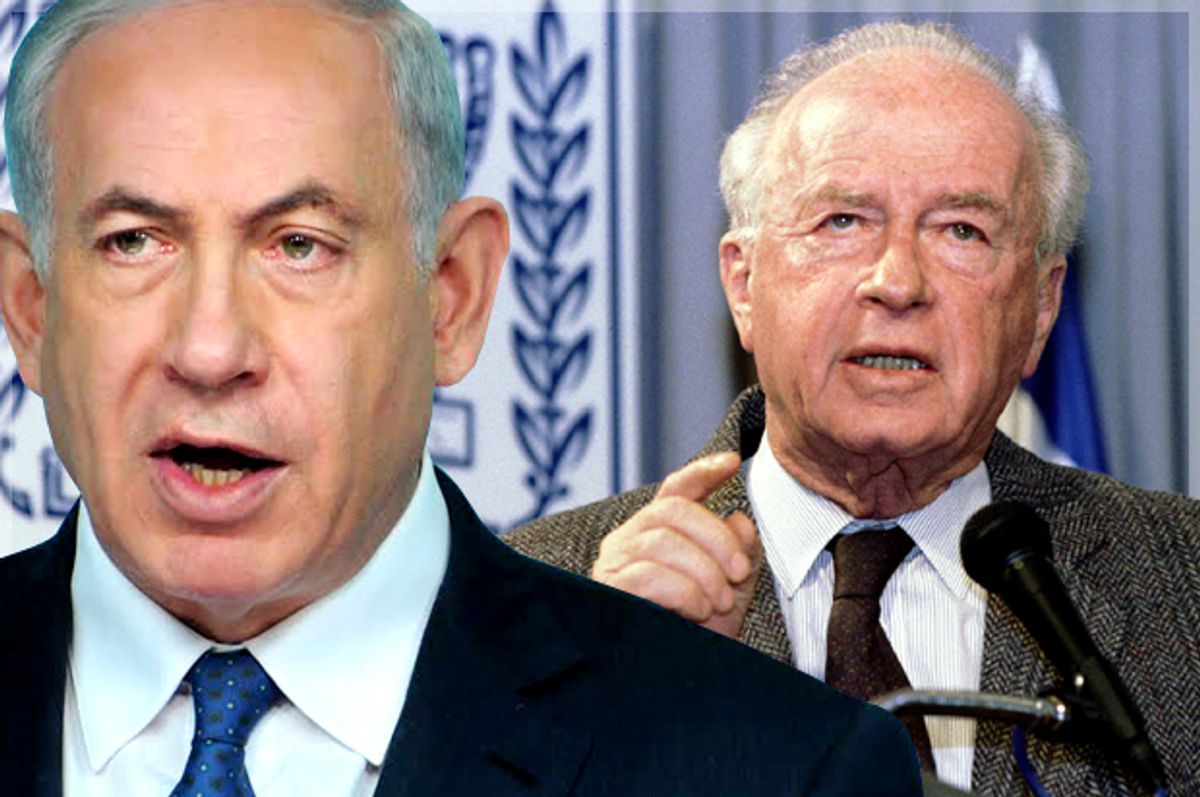 In early November, 20 years to the day after the assassination of Israeli prime minister Yitzhak Rabin by a right-wing religious extremist, Amos Gitai's mesmerizing and disturbing new film “Rabin, the Last Day” premiered in Tel Aviv's symphony hall — about 200 yards from the spot where Rabin was shot. It’s no ordinary movie: “Rabin, the Last Day” is a disorienting mixture of drama, documentary and meticulous re-creation, and very little of it takes place on the last day of Rabin’s life. (The title ultimately takes on other meanings.) And in the context of Israel today, not to mention the context of the Middle East and the world, this was no ordinary movie premiere. Gitai is both a living legend of Israeli cinema and a highly controversial cultural figure, and with “Rabin, the Last Day” he seizes the third rail of Israeli politics with both hands.

I’m always dubious of all manifestations of the Great Man theory of history, in which destiny is shaped by the rise or fall of a single individual. But political assassinations, by their nature, are disruptive events meant to change the course of history, and even by that standard this one had far-reaching consequences. Rabin and his deputy, Shimon Peres, had gone much further than any previous Israeli leaders toward a permanent settlement of the “Palestinian question,” and with the Oslo Accords had agreed to the general outlines of a historic land-for-peace deal with Yasser Arafat. It’s too simplistic to claim that Rabin’s death undid all that at one stroke, but it certainly began the unraveling.

If the Rabin assassination feels like a dim and incomprehensible memory to most Americans, it nonetheless affected our nation’s path into the 21st century in many ways. In retrospect, that was almost certainly the moment when the window for a “two-state solution” to the Israeli-Palestinian conflict came slamming down. Politicians around the world still have to pretend to believe in that possibility, but it's largely a charade. Their real attitude is much closer to Mitt Romney's famous (and apocryphal) line about kicking the can down the road. As Gitai drily told the French newspaper Le Monde in a recent interview, as things stand now, “to say that it would work to place two states side by side is highly theoretical.”

I found Gitai's film difficult to watch at first, but then I was completely addicted and even after 153 minutes I wanted to know more. He draws on numerous official sources, including the government commission that investigated the murder and police interviews with the assassin, a 25-year-old religious student named Yigal Amir. In an interview that opens the film, Peres, who was Rabin's lifelong rival, colleague and friend, is asked whether we would live in a different world now if Rabin had not been killed in 1995 — whether the Arabs and Israelis would have made peace. He answers with one syllable, and says it twice: “Ken. Ken.” Yes. Yes. None of that is knowable, of course, but the more you think about it the bigger the questions get. Would the 9/11 attacks have happened? Without that day, of course, the United States does not invade Iraq or Afghanistan, which means that ISIS never comes into existence.

But those intriguing hypotheticals are not the explosive element in “Rabin, the Last Day,” or the reason it was made a headline news event in Israel. Gitai comes pretty close to blaming Benjamin Netanyahu, the current Israeli prime minister, for Rabin's murder. In fairness, the filmmaker does not quite put it that way (and for legal reasons, probably can’t). The case he builds against Bibi is about influence and inference, a matter of moral responsibility rather than criminal culpability. In that French interview, he says that the film offered “the occasion to ask a question of Israeli society,” but never says exactly what question he had in mind.

This is not a conspiracy theory film, and Gitai never challenges the legal proposition that Amir was more or less a classic “lone nut” who went out to stalk Rabin of his own volition, without much planning or forethought. But Amir’s brand of nuttiness was not isolated and did not exist in a vacuum. Netanyahu was the head of the right-wing Likud party and leader of the parliamentary opposition in 1995. He did not pull the trigger or put the gun in Amir’s hand. He never advocated violence against Rabin or Peres as a way to stop the Oslo peace process, and did not condone the assassination after it happened.

But the leitmotif that runs through “Rabin, the Last Day” is that the Israeli religious right viewed the Rabin-Peres government as illegitimate, and the potential land-for-peace deal it had struck with Arafat and the PLO as treasonous. Radical rabbis that Amir knew and trusted had proclaimed the Jewish equivalent of a fatwa against Rabin: He was a traitor to the Jewish people, worse than the most anti-Semitic gentile, and his life was forfeit. Whatever Netanyahu's personal convictions may have been, he fostered that environment of hatred and intolerance and was its principal beneficiary.

In the film, we see Netanyahu speaking at rallies where his supporters held up posters calling for the deaths of Rabin, Peres and Arafat and the extermination or expulsion of all Arabs on Israeli-held land. He surely saw the homemade images of Rabin in a keffiyeh, or Palestinian-style headscarf, and the other images, the ones depicting Rabin wearing an SS officer's uniform. He saw people staging a mock funeral for Rabin, carrying a coffin through the streets. He saw all those things and said nothing about any of them. Indeed, he embraced that situation as a political opportunity.

Asked by the reporter for Le Monde whether he was making a “terrible charge” against Netanyahu, Gitai did not quite answer yes or no. “This man has unlimited personal ambition, to the point that he is willing to endanger certain essential ingredients of Israeli society,” he responded. “Under his reign, extremely problematic racist tendencies have emerged. At the same time, his capacity to turn everything toward partisan ends risks destroying the collective project that is Israel. That project of creating a place of refuge for the Jews was the political conclusion of a long chain of suffering. It was not a religious project.”

Many people on all sides of the issue would disagree with various aspects of that, I’m sure. (We’re talking about the Middle East, which means that nobody will ever agree about anything.) The Israeli religious right would insist that there was a strong religious component to their nation from the beginning. Palestinians and their supporters in the European and American left, on the other hand, might say that there was an element of racism in the State of Israel all along, and that Gitai is clinging to a romantic vision of Israeli identity that has been long discredited. There is some plausibility to both of those counter-arguments, but whether or not you and I find Gitai’s political arguments acceptable on all levels is beside the point.

Gitai is indeed making the case in “Rabin, the Last Day,” as he has throughout his career, for an alternative vision of Israel’s past and Israel’s future. Although the Israeli right often depicts him as a left-wing dissident artist beloved by European radicals, his patriotic credentials are beyond dispute. He learned his craft shooting footage in the Israeli military, and survived a helicopter crash after being downed by a Syrian missile during the Yom Kippur War of 1973. Gitai’s first response in the Le Monde interview, when he is asked why he wanted to make a film about Rabin’s assassination 20 years after the fact, begins this way: “My dear country, which I love very much, is not doing so well.”

The existence of this film, and the furious debate it has spawned, stands as proof of Gitai’s fundamental argument that the belligerent nationalism of Bibi Netanyahu is not the only Israel. Discussion of Israel in American politics is so distorted — mostly by the bipartisan agreement that no aspect of Israeli foreign policy may be questioned — that progressives often focus almost exclusively on Israel’s military misdeeds and its flawed human rights record. When it comes to things like the recent military campaign in Gaza, that’s both understandable and necessary. But turn the question around for a minute: Is it even remotely conceivable that a film this scathing and self-critical, a film that asks essential questions about the nature of national identity, could be made in Egypt or Jordan or Syria or the Palestinian territories, and then have its public premiere in the largest concert hall of that nation’s largest city?

That tradition of intellectual openness even in times of adversity, of rigorous and (if you’ll forgive the cliché) rabbinical self-scrutiny, is very much under attack. “Those who contributed to the climate of hate that led to the assassination of Rabin today flirt with power,” Gitai told Le Monde. “The danger is that everything that created the original character of Israeli society will finally disappear.” But history, as Gitai and his film both suggest, is a dialectical and paradoxical process that ultimately obeys its own laws. By killing Yitzhak Rabin and the two-state solution, Gitai suggests, the Israeli extreme right has ensured that the only possible outcome, decades or generations from now, will be precisely what it wants to resist: “One state, with equal rights for all its citizens, whatever their religion or their origin.” What lies between then and now? He has no doubt about that, and the pattern is familiar: “Lots of blood will flow, certainly.”

“Rabin, the Last Day” is now playing at the Lincoln Plaza Cinema in New York. It opens Feb. 5 in Phoenix, March 11 in Los Angeles and Santa Fe, N.M., and April 14 in Washington, with other cities and home video to follow.