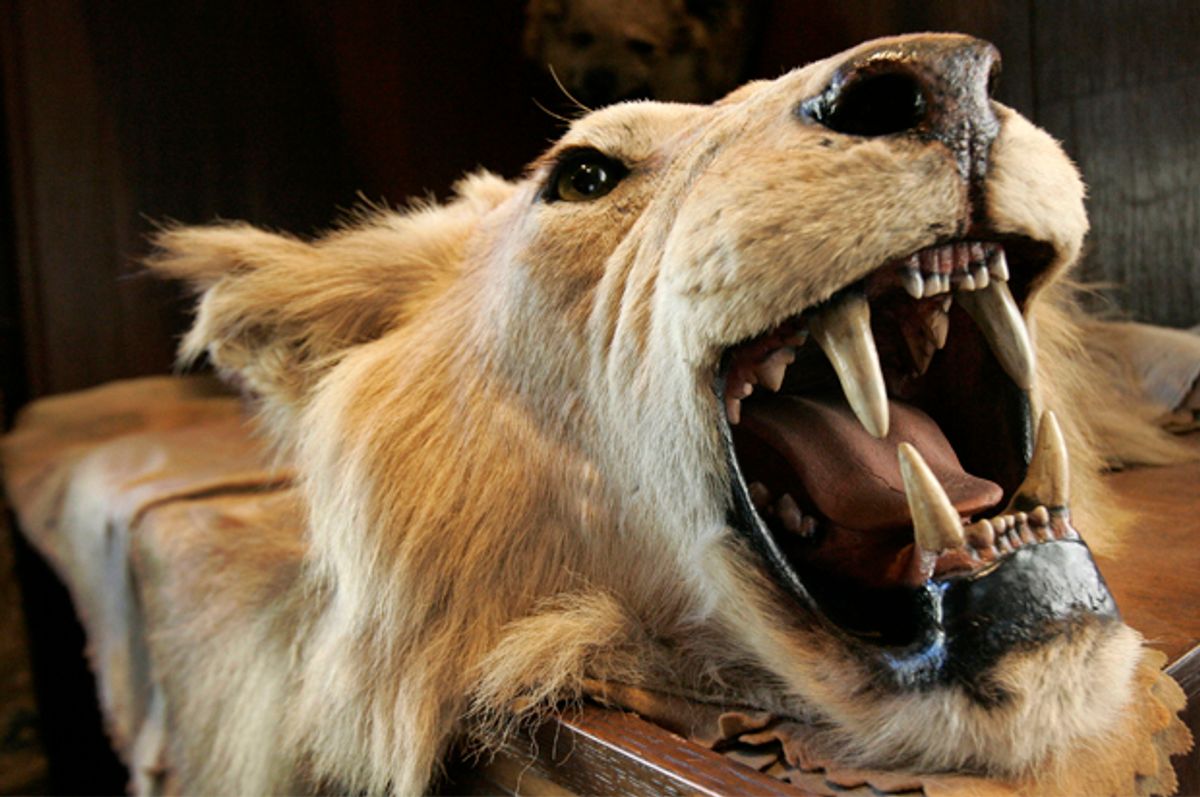 "Isn't it time you started living your dream?" the Safari Club International — whose annual auction opened this week in Las Vegas, asks. And if your dream is to pay a lot of money to kill a big animal, this is the season to make those dreams come true!

As Brian Clark Howard writes for National Geographic Tuesday, SCI is "world's largest trophy hunting organization" and its annual get together bills itself as the "ultimate hunter's market," offering "at least 600 animals in 32 countries in Africa, Europe, Oceana, and the Americas." It's likely to be a blowout -- the Dallas Safari Club just ended its annual event, reporting a record attendance while in the past year, membership has "surged."

The debate over hunting — expensive, exotic, big game hunting, to be precise — has raged on and off for ages, but in recent years, it's become more acute. In 2013, Donald Trump's sons Donald Jr. and Eric created an uproar when triumphant photos of them posing with their kills from a hunting trip to Africa — via a company that helps self-proclaimed "avid outdoorsmen" like them "hunt old & mature male animals, which are beyond their prime productive time" — emerged. Even their father wasn't pleased, saying, "I’ve never liked that they like it… I’m going to talk to them about it. I’m not a fan of the whole situation." In 2014, controversy erupted again when millionaire oil heir and hunter Corey Knowlton paid the Dallas Safari Club a reported $350,000 to hunt and kill an endangered black rhino in Namibia. He explained at the time, "I want to experience a black rhino. I want to be intimately involved with a black rhino." Last May, he finally got that intimate experience, saying to CNN that "the killing of an older rhino bull, which no longer contributes to the gene pool but which could harm or kill younger males, is part of the science of conservation."

Then in July, Minnesota dentist Walter Palmer — after paying a reported mere $50,000 for the privilege — killed a well-known lion named Cecil near Zimbabwe's Hwange National Park. The events surrounding Cecil's death — including accounts that the animal had been lured out of the sanctuary of the park, and the fact that his tracking collar had been deliberately removed -- sparked international outrage. Zimbabwe’s Environment Minister Oppah Muchinguri said at the time, "We believe that the people who are the culprits lured Cecil outside the national park by… dragging that bait to an area where he was then murdered,” he said. “And I say ‘murdered’ because that was not hunting." As a result of the worldwide attention, Palmer received multiple death threats and his office was vandalized. His business Yelp page is still full of vitriol about his actions, with a post vowing to "shred this poaching scum" added as recently as Wednesday.

You'd think, then, that things would change. And they have, in some ways. In December, the U.S. Fish and Wildlife Service declared that "Lions in central and West Africa will be listed as endangered," while "southern and East Africa will be classified as threatened, with a special rule that prods countries to regulate sport hunting of lions in ways that promote conservation." The regulations will also result in "stricter criteria for the import of live lions and lion parts, like heads, paws or skins." The Humane Society also reports that "numerous airlines have also stepped up to ban carrying 'Africa Big Five' trophies. After all, if these wealthy hunters are really in it for the love of the outdoors and conservation, do they need, as the Society's Wayne Pacelle puts it, to "fill their dens or private museums, get their names in the record books of Safari Club International, and brag to their buddies that they’ve killed the biggest and the grandest of creatures on earth?"

Yet for now, the competition for bragging rights and skinned heads continues at a stronger pace than ever. Attendees at SCI this week can attend a seminar to "share effective persuasion techniques that refute anti-hunting attacks and lay out the moral justification for hunting." And bidding on a big game safari to Tanzania to hunt "lion, leopard and numerous plains game species" is currently opening at $85,000.