Racism, jealousy and pettiness have dogged a magical season for star on verge of sports immortality 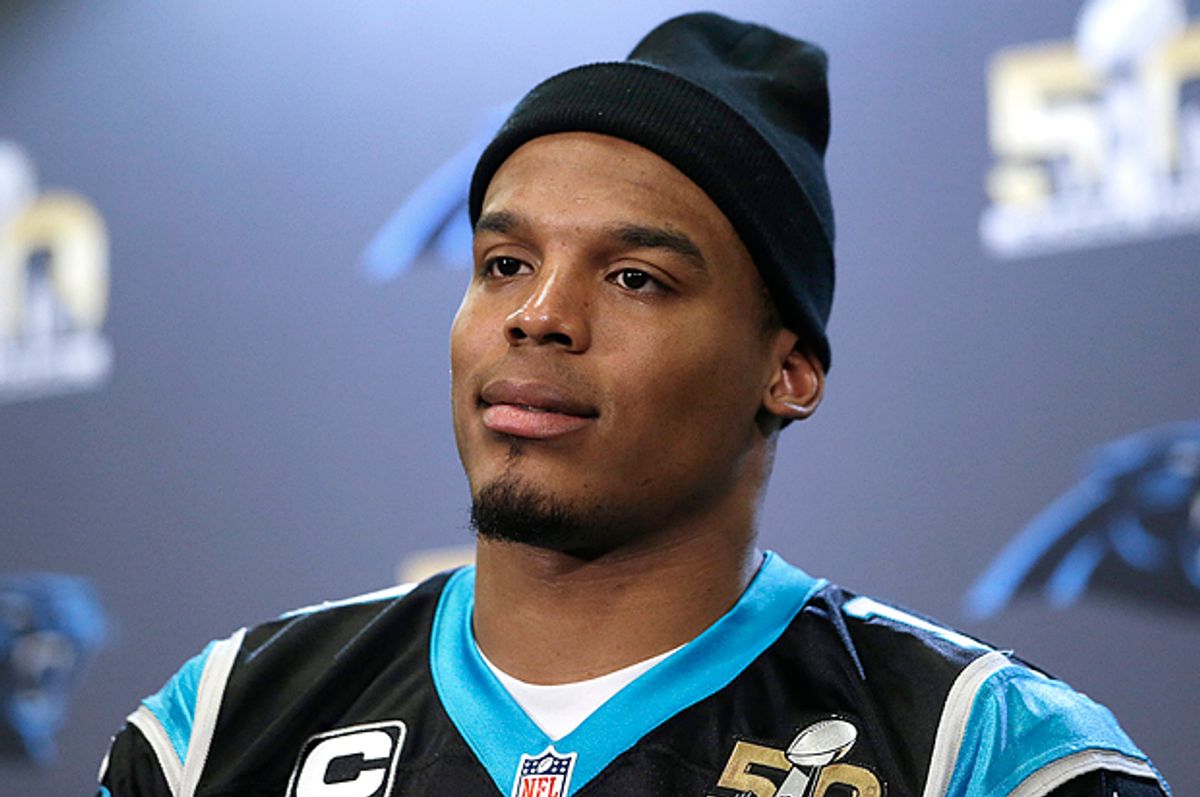 “Newton's actions on and off the field relate to hip hop, much like Michael Vick's did in his prime and Allen Iverson to a larger extent.” – NFL.com

“I said it since Day One: I’m an African-American quarterback that may scare a lot of people because they haven’t seen nothing that they can compare me to. —  Cam Newton

On Sunday, Peyton Manning will take the field for what will likely be his final NFL game. Manning may be hobbled, waning and dogged by allegations of PED use, but a Broncos victory would be the ultimate grace note for one of football’s great careers.

Except nobody’s talking about Peyton Manning’s chance at a memorable exit. Instead, the run-up to Super Bowl 50 has focused almost entirely on Panthers QB Cam Newton, who this season established himself as the most dominant, galvanic and charismatic figure in the league.

Newton, who has overcome early questions about his judgment, maturity and accuracy, lead Carolina to a 15-1 record while overshadowing nearly every other story in football. The putative MVP is also a born pitchman, striking the perfect balance between excitable and cool. Cam Newton also happens to be proudly, unapologetically black.

Cam Newton wouldn’t be the first African-American signal caller to win a Super Bowl. That distinction belongs to Doug Williams, who won with the Redskins in Super Bowl XXII. But given how prominently Newton’s race has figured into the conversation, it feels like he’s the one on the verge of breaking one of sports’ last remaining color lines. A win for the Panthers would make Cam Newton into the new face of the NFL. And because Newton is so comfortable with being himself at all times, this scares the hell out of some people.

Cam celebrates vociferously after a big play, dabs on the field, and plays with a joy and expressiveness that’s almost alien to football’s grim, militarized landscape. He rocks Louboutin footwear and pals around with rappers like Young Jeezy and Future; his speech is peppered with phrases that are new to the ears of many Americans. And then there’s his omnipresent smile, which, depending on who you ask, is either life-affirming or unbearably smug. If Cam Newton wins a Super Bowl, he becomes the new face of the NFL and in the process changes the complexion of football. And this scares the hell out of some people because Cam brings with him a level of cultural baggage—and the possibility of sweeping change—that’s not supposed to creep into this conservative, hidebound game.

That’s why, all season long, we’ve seen an increasingly desperate campaign to discredit Cam Newton. As Greg Howard detailed in his excellent history, black QBs have long faced undue criticism and resistance. They’ve been dismissed as “running quarterbacks,” or convinced outright to convert to another position. Phenoms like Randall Cunningham and Michael Vick shattered the convention but could be easily marginalized for it. At every given turn, there were questions about their legitimacy, based on the stinging assumption made that African-America athletes just don’t posses the range of skills needed to fill football’s single most important position. The fear of a black quarterback, as Tommy Craggs put it, has always been assuaged by finding creative ways to minimize their performance.

Except at this point, Cam Newton’s play is beyond reproach. What makes him so subversive is just how un-subversive his play is at this point, how readily he could slide into that role of quarterback of record. Newton has grown into the ultimate modern QB and succeeded to such a degree that his on-field credibility simply isn’t up for debate. That’s why his critics have been forced to resort to a culture-based critique of the Panthers superstar. The very qualities that make Cam Newton an unprecedented figure in the NFL have, at least in theory, become points of contention. He’s arrogant, pompous, loud, showy, lacking in humility, a walking sideshow. His shoes are too expensive and his pants are too bright. One Tennessee mom wrote a letter to the editor calling him an unfit role model and, implicitly, a hyper-virile menace to society.

Even the NFL’s official website can’t help but liken Newton not only to Vick but also to NBA icon Allen Iverson, whose disruptive style has nothing in common with the way Newton plays football. Iverson—magnetic as he was—frequently presented himself as snarling or defensive. Newton is nothing if not diplomatic. All they have common in this so-called affinity for “hip-hop,” code so unmistakable, and in this case desperate, that it hardly warrants an explanation.

Cam Newton’s play legitimates “hip-hop,” rather than it being some sort of professional burden for him. This is, in essence, a war over whether Cam Newton’s blackness is an asset or a liability. And given his immense popularity, the former seems to be taking the lead, to such a degree that lately a “not that many people hate Cam Newton” meme has taken hold—as if his detractors had now become desperate dead-enders, grasping at any excuse to call Cam out and hope that, just this once, his actions or attitude would be viewed in a wholly negative light.

All this week, Cam Newton has gracefully, openly fielded questions about race to an almost unprecedented degree. It’s an unfair imposition and Newton has no choice but to smile and play along. But his candor has been remarkable, for the simple fact that he’s acutely aware of and willing to discuss what he represents to the American public. If Newton wins a Super Bowl, he becomes the NFL’s standard-bearer. And this could potentially bring about a sea change in the way people play and view the sport, or at least provide a much-needed distraction from the league’s never-ending public relations crisis. Over the weekend, Lions wide receiver Calvin Johnson announced his retirement at age 31, citing health concerns.

Cam Newton could, at least superficially, cast football as an entertaining, downright fun sport to watch and play, rather than a grim morass of grave bodily harm and nameless, faceless acts of self-sacrifice. He could even influence younger athletes to ditch the joyless warrior mentality and view the game as more expressive and exciting. There’s more to football than violence and self-effacement, and Cam Newton proves it every single game.

But when Cam Newton dabs, we don’t just see football forced to catch up with the rest of American society, which has over the last few years been more open to embracing figures like Cam and publicly discussing issues of race — let’s not forget, we elected Barack Obama president of the United States. We see the possibility that Newton could not only bring something new and invigorating to football but also potentially use it as a platform to make society itself a more open, inviting place. Football could go from retrograde to progressive, from a place where old attitudes die to one where new ones are forged. Maybe that’s too much to put on one 26-year-old. But if Cam Newton wins on Sunday, there’s no telling what will happen in his wake.