Ted Cruz is feeling the Bern! On the New Hampshire trail with the GOP's cute but sinister rebel firebrand

ls Cruz an alien robot, or a marzipan man? The Great Right Hope hits the Granite State, with bewildering results 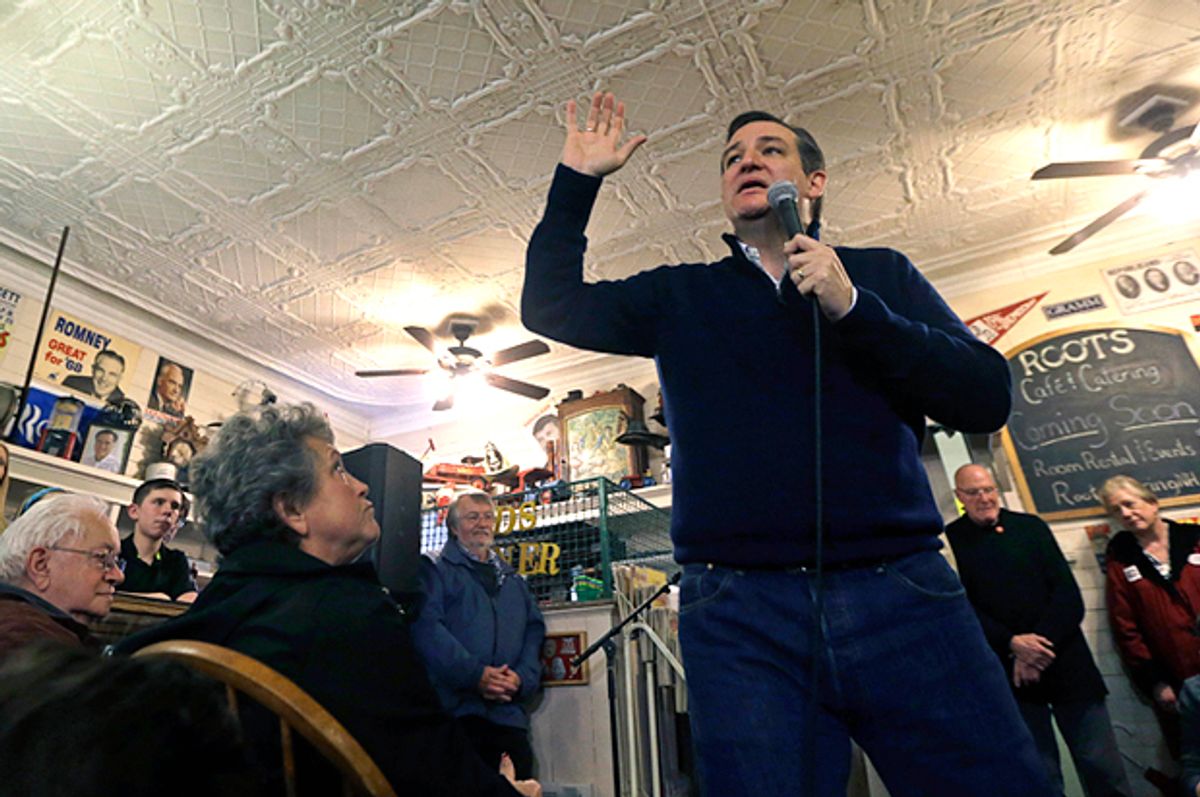 SALEM, N.H. -- Ted Cruz in person, on the campaign trail, is a study in contrasts. What I principally mean by that cliché is that Cruz makes a more plausible human being when seen up close than in his animatronic television appearances, but he does not resemble a human being who came into the world by the usual method. He’s both cute and sinister, a highly discordant combination. He’s like a marzipan man brought to life by the kiss of a magic fairy, stuffed into overly tight blue jeans and sent toddling into middle-school cafeterias in the middle of nowhere to answer strange hypothetical questions about Fidel Castro attacking ISIS. It’s all somewhat convincing, but you can still tell that under the 3-D printed clothing and the right-wing talking points, he’s sugary and delicious.

Another contrast I observed on Friday evening during Cruz’s town-hall appearance in this strip-mall suburb just north of the Massachusetts border is the one between the idea of Ted Cruz, fearless conservative warrior who has electrified the true believers of the right, and the real Ted Cruz who eventually showed up. Close to 300 potential voters and about 60 journalists packed into an overheated schoolroom here to meet the surprise victor of the Republican caucuses in Iowa, the firebrand who seeks to unite the evangelical and libertarian strains of the Republican Party and who prides himself on being loathed by the bipartisan Washington establishment.

Some of the actual civilians who showed up were merely curious. Some had driven long distances to ask highly specific questions of the potentially heartbreaking or bee-in-bonnet variety, like the Castro-ISIS person or the man who suspected his brother had died after being overmedicated in a V.A. hospital. (He was one of six African-Americans in the crowd, a higher number than I expected.) Some were truly psyched, like the heavily tattooed biker-looking guy in the back of the room who kept throwing out supportive comments in a thick Yankee accent suggestive of a Mark Wahlberg character. What should Cruz do on his first day in office? “T’row Hillary in jail!” (This comes up so often the candidate has a stock response: “She may already be there!”) People in Washington say Cruz is unlikable because he hates big government! “Ya musta hit the tahget theah, Ted!”

In any event, what all these people encountered was one of the most boring and tin-eared political performers of recent memory. (Although I probably shouldn’t say that yet: I’m catching Jeb Bush over the weekend.) Cruz and his surrogates repeatedly seek to compare him to Ronald Reagan, and his stump speech harps on the supposed parallels between the late 1970s and today: A struggling economy, Russia and Iran on the rise, a despised Democrat in the White House who has dragged the country to a low point. (I won’t waste your time rebutting any of that.) But whatever else you want to say about Reagan, he was a natural public speaker with genuine warmth and charisma, who connected easily with people.

Ted Cruz has lab-grown GMO charisma-type product. He is a former Ivy League debater who has delivered his stump speech a zillion times, and has developed what is supposed to feel like a natural rhythm, with jokes thrown in at appropriate moments. He is undeniably working hard out here, but it all feels forced and difficult, like cramming squishy marzipan thighs into starched Levi’s. Where the jokes about Cruz being a robot or an alien come from is the miasma of unease surrounding the whole performance. This is a guy who quotes compulsively from “The Princess Bride." Not from a Frank Capra movie or a John Wayne movie or “Hoosiers.” ”The Princess Bride.” He’s a right-wing think-tank nerd, who should be trading quips with friends over a $180 dinner in Georgetown instead of talking to strangers in a New Hampshire town whose main drag, in 2016, features a store for ham radio enthusiasts. (Ham radio and “The Princess Bride” kind of go together, am I right?)

Cruz had moments on Friday evening when he hit on something the audience really wanted to hear: They love the flat tax, and they really, really hate the Iran nuclear deal. But those applause lines almost seemed to happen by accident, and Cruz barely seemed to notice. He said the phrase “flat tax” once, got the big Pavlovian cheer he was looking for and hurried on, perhaps because he is intelligent enough to know that even if by some awful mischance he is elected president he will never, ever get such a thing passed. He got pretty worked up about the evils of Iran and ISIS and “radical Islamic terrorism,” without ever mentioning that ISIS and Iran are mortal enemies (as he surely knows), and the crowd loved his promise to “rip that Iran arms deal to shreds” on his first day in office. Which is another thing he couldn’t actually do.

But Cruz has the policy wonk’s tendency to veer off onto extended tangents — about Muammar Gaddafi and Libya, in this case — that seem intended to prove how much smarter he is than everybody else, and every time that happened you could feel the energy drain out of the room a little more. Hearing the marzipan man promise to rain merciless death on distant, theoretical enemies is cool. Hearing him deliver a tendentious lecture about how Barack Obama and Hillary Clinton screwed everything up in Libya and Syria (said lecture drawing about equally from Paul Wolfowitz and Henry Kissinger) is not nearly so fun.

I had driven all day through a New England snowstorm to get here, and was standing amid the institutional boredom of the press section, woozy and dehydrated in the cranked-up indoor heat. Back there you sometimes feel that if the Gettysburg Address were being delivered, the reporters would carry on texting with their friends, browsing the websites of nearby restaurants and reading other people’s stories about other campaign events. During the foreign-policy seminar segment of Cruz’s stump speech I began to wonder if I would actually lose consciousness, or perhaps to hope I would. It’s been many years since I was in college, but it felt as if I had signed up for some beloved professor’s class on the recommendation of friends, and now had to face the fact that my friends were idiots.

Cruz has a list of seven litmus-test issues for conservatives where everyone else has failed and he has stood tall. He doesn’t come right out and say that they were trials set for him by God, and that he has blown away the Almighty with his awesome steadfastness, but that’s the idea. The thing is, I could list them all for you in one sentence, and most are thoroughly unsurprising: Obamacare, abortion, guns, marriage, immigration and so on. Yeah, Ted Cruz is not done fighting on gay marriage, or at least not done bitching about it. (That issue drew almost no applause.) Anyway, he goes on and on about each of them, at baffling and unendurable length, the point being that he’s really serious about this stuff, unlike the other so-called conservative sellout losers. “Trump!” someone helpfully calls out, followed by a derisive chant of “Marco! Marco! Marco!” Cruz giggles unpleasantly, the Gollum of marzipan men.

One of the problems Cruz faces in New Hampshire is the question of what he’s trying to accomplish here, and whether he should even bother. Maybe he’s not actually here, and what I saw on Friday night was a projection. Holographic marzipan! That might account for the fact that the inspirational videos meant to pump up the crowd before Cruz’s appearance, starring Brent Bozell and Ginni Thomas — wife of Clarence Thomas, and a hardcore movement conservative — featured luminous shots of cornfields and testimonials from Iowa Republicans who had switched to Cruz from other candidates. Yeah, they showed their Iowa campaign video in New Hampshire, which felt midway between a “whoops” and an “oh, who cares?”

According to conventional campaign wisdom and the dubious social science behind it, the Granite State isn’t a good fit for a hard-right Bible-thumper from Texas. Religion is not a huge part of public life in New England — by his standards, Cruz barely talked about God on Friday — and New Hampshire’s crotchety, libertarian “Live Free or Die” tradition seems better suited to Donald Trump, who is still favored to win here on Tuesday. If Cruz has a path to the nomination, it presumably goes through South Carolina and Super Tuesday, the Deep South and the prairie states.

But nobody knows anything in 2016, and whatever descriptions you might apply to Ted Cruz, he is much weirder and more complex than “right-wing Texas Bible-thumper” can begin to capture. He is after all a Cuban-American of Canadian birth, who went to Princeton and is known for his fandom of “Les Miz” and “The Princess Bride” and will talk your ear off about federal land-management policies and the realpolitik of dealing with Vladimir Putin and Bashir al-Assad. In case we had forgotten about Cruz’s Calgary birthplace, there were two guys standing in the snow outside dressed in pseudo-Mountie costumes, holding up maple-flag signs emblazoned with Cruz’s face. Trump operatives? Distant Bush cousins? Or just wackos? They had clearly been instructed to say nothing to anyone.

Cruz never mentioned Donald Trump directly, but he brought up the other campaign phenomenon of 2016, Bernie Sanders, several times. And not the way you would think! His standard line is that the Democrats are choosing between a wild-eyed socialist and Bernie Sanders, ha ha. (There is no way that Cruz actually thinks Hillary Clinton is a socialist.) Later on he implied that he, and not another unnamed candidate, is the real anti-establishment rebel in the Republican race, the right-wing cognate to Sanders. “I agree with a lot of what Bernie says about the problems in our country,” he said amid deep and baffled silence. Tattooed Wahlberg Man had nothing to say about that. “But if government is corrupt, the answer is not a heckuva lot more government!” Some applause there, yeah. But folks were puzzled.

It was the nicest thing he said about any living politician all night. Ted Cruz is feeling the Bern. If they get together at the ham-radio store, they’ll have a lot to talk about. Except that Bernie has the look of a guy who’s always snacking and can’t help himself, especially when Jane is not around. If he just pulls off the marzipan man’s arms and eats them it would be a sad ending to the story.