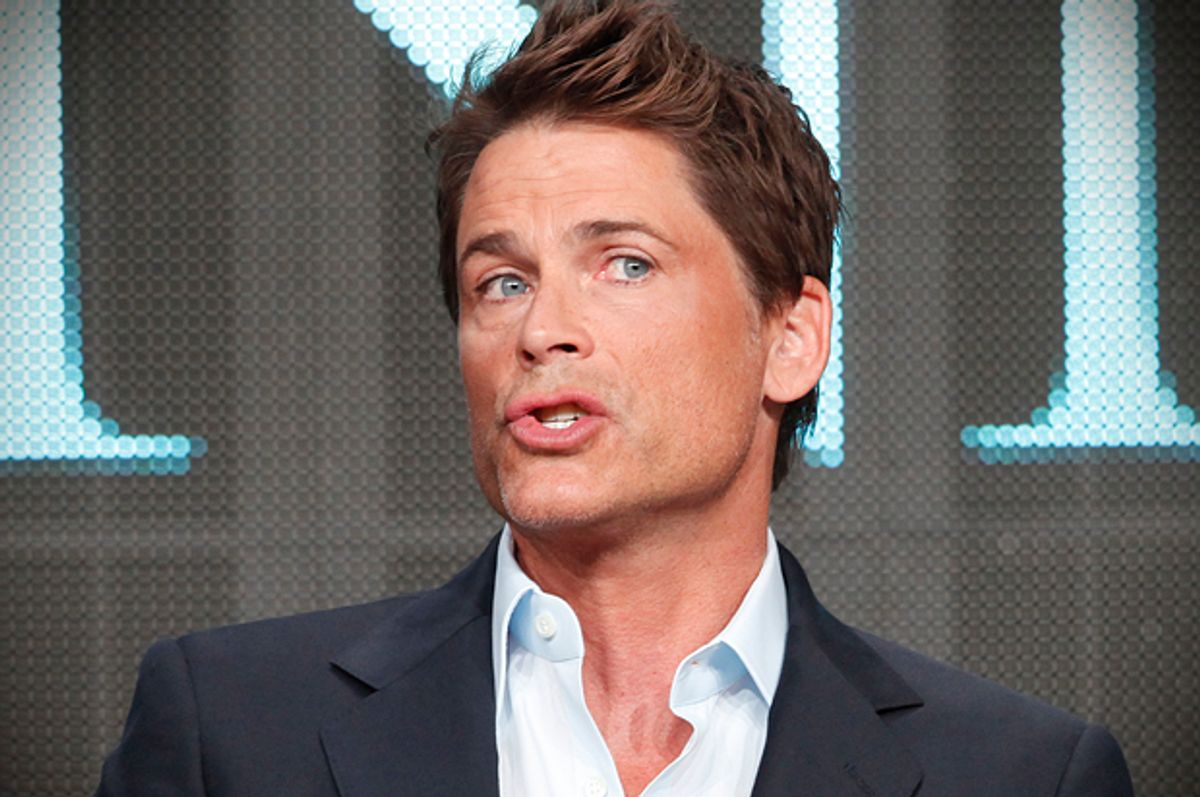 The best thing about following celebrities on Twitter is the way it can offer fleeting moments of feeling like, "Yes, this is what it would be like if Carrie Fisher and Susan Sarandon really were my hilarious friends." Conversely, the worst is facing the irrefutable truth that the someone you loved on "Firefly" is a bona fide idiot. Or that your teenage crush is really bad at social media. So anyway, speaking of Rob Lowe, he's been tweeting again.

Rob Lowe, aka Sodapop aka Chris Traeger aka the Grinder, has over his multi-decade career adeptly transitioned from Tiger Beat cover boy to reliable television MVP and cancer advocate. He does not, however, seem the most graceful within the confines of the 140-character limit. Back in November, Lowe, like many other stars, tweeted out his support for the people of France after the Paris attacks. But while his initial simple expression of "Vive La France!" went over fine, his followup, a few minutes later, that "Oh, NOW France closes its borders. #Hollande," was greeted with less enthusiasm. Followers soon called his remarks "disgusting" and in "bad taste." (Lowe later reasserted that "This is all so devastatingly sad for a place I love.") Then in January, the actor, seemingly mistaking himself for his "West Wing" character, tweeted, in quite a self-congratulatory move, one of Sam Seaborn's Aaron Sorkin-written monologues about taxation at Bernie Sanders. It seemed perhaps a veiled reference to the well compensated Hollywood star's own previous tax woes.

Then on Sunday night, the Broncos fan was in the stands proudly showing the world that he was "repping for The Sheriff." When the game was over, he announced, "So happy for Peyton's win, I'm dabbing my eyes!!! #SuperBowl." — a thinly-veiled schadenfreude reference to defeated Panthers quarterback Cam Newton's signature dance move, perhaps? But when Newton seemed to choke in the postgame interview — giving a few terse replies before getting up and walking out — Lowe went all in with his sarcasm, leaving no doubt to his feelings on Newton. "Wow. What a press conference from Cam Newton," he wrote. "So gracious! So classy! So humble! What an example to kids! Just like Peyton. #dab #SuperBowl."

It didn't take long for Twitter to show off the public's long memory when it comes to who gets to fire off the "good example" charge. Sure, 26 year-old Newton could be accused of losing his cool — but as some have generously pointed out, it was an emotional moment, and Newton's choice to walk away may have been the best one he was capable of making at the time. And you'd think Lowe of all people would have some understanding of youthful bad decision making.

Back in 1988, Lowe, while out campaigning for presidential candidate Michael Dukakis, picked up two young ladies and engaged in a romp that they recorded. As ABC News later explained, "By morning the girls and the videotape were gone. The tape later became public." And oops, one of the girls was 16 at the time. Because the age of consent in Georgia is 16, Lowe did not face any criminal repercussions for the incident, though the girl's mother filed a suit charging he "used his celebrity status as an inducement to get females to engage in sexual intercourse, sodomy, and multiple party sexual activity for his immediate sexual gratification, and for the purpose of making pornographic films of these activities." Lowe later settled the suit out of court, and in 1990 he entered rehab. He now credits the incident with helping him get sober, calling it "the greatest thing that ever happened to me."

To recap — some people in their twenties are playing in the Super Bowl. And some are hitting their alcoholic bottoms and making sex tapes with teenagers. As one observer put it on Sunday, "Twitter is that place where a guy that made a sex tape with a 16 year old kid is telling other people what's good for kids." But we all mature at different rates, right? And sorry to dredge up past mistakes, Lowe, but that's what you get when you decide you're the role model police -- and you've forgotten your own past.