The system is just this rigged: The Kochs, Citizens United and the real reason why corrupt big money must be kicked out of politics

Obama is promising more transparency, but that doesn't go far enough. Large private donations must be made "toxic" 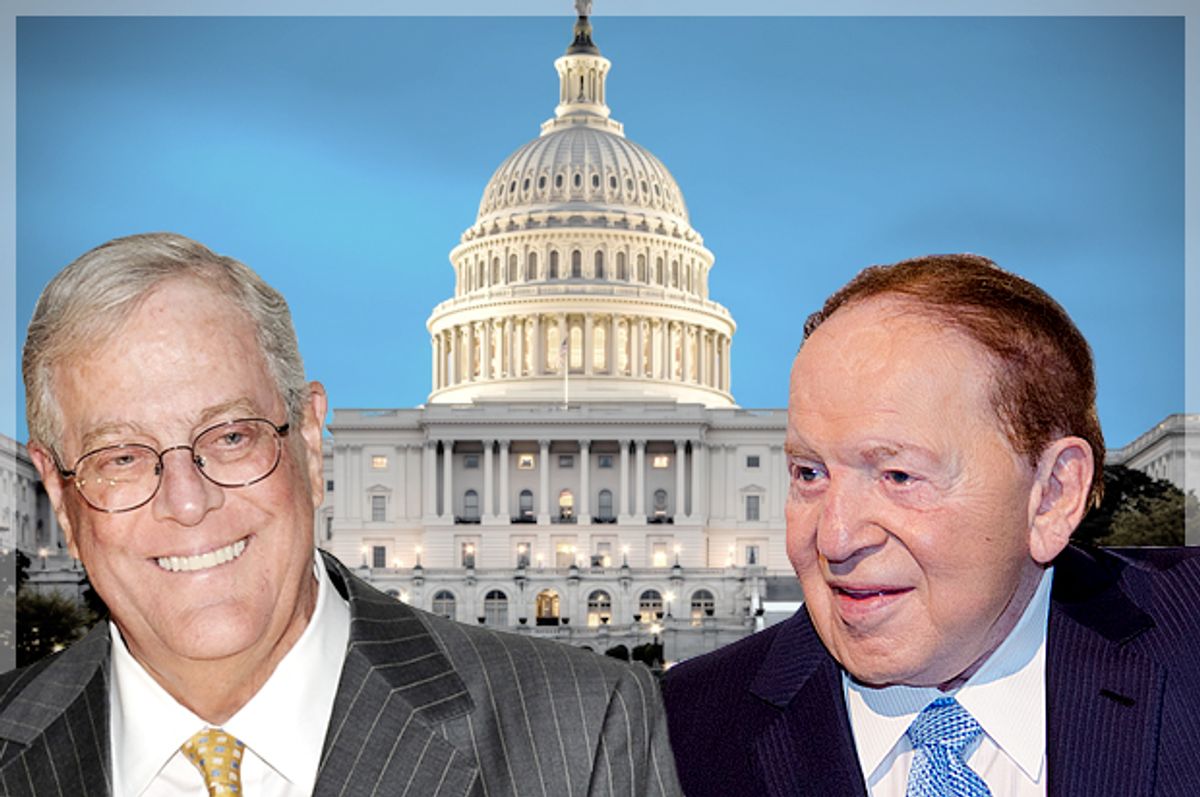 The New York Times recently reported that President Obama is considering issuing an executive order that requires federal contractors to disclose their political expenditures. Up to 70 percent of Fortune 100 companies would be affected, according to Public Citizen’s Congress Watch.

Following months of heavy pressure from government-reform groups, this would be the president's first significant step to fix our utterly dysfunctional campaign finance system.

And, if implemented, the executive order would align the president with 85 percent of Americans who say they want fundamental changes in how we fund our elections.

Of course, it’s only a modest first of many needed reforms. The president conceded as much in his State of the Union address, declaring that we must “change the system”. Although Obama offered no details, those in the Democratic Party trying to succeed him agree on key reforms. Bernie Sanders and Hillary Clinton have both issued policy platforms proposing public financing of elections and initiating the legislative process to circumscribe Citizens United.

But why is fundamental change necessary? Isn’t disclosure enough, as some Republicans have suggested?

For example, even in a more transparent U.S. campaign finance system:

Of course, transparency has its purpose. In a well-functioning democracy, citizens must know how candidates are funded. This helps voters make informed decisions. Obama’s executive order certainly would move us in this direction.

It is important to note that even after transparency laws are implemented two hurdles can prevent disclosure from functioning effectively:

Despite reasons to be pessimistic, there is no reason to give up. Yes, much more needs to be done to ensure greater transparency and fairness in our democracy.  Yet, Obama’s potential executive order and the rapidly growing coalition ready to take immediate action to save our democracy should inspire hope that the needed change can be won.

Just as the president said, though, it is up to us, the people, to ensure a fair and equal democracy. We cannot be complacent.

Until the executive order is officially issued, we must continue to pressure the president. While many are cautiously optimistic the president will follow through on his promise to fight for our democracy, there is no guarantee.

And, in anticipation of the executive order and thereafter, our job must also be to expand the fight, advocating for even greater disclosure, contribution limits, revolving door bans, new ethics and lobbying laws, Federal Election Commission reform, and most important, public financing of elections and the restoration of the Voting Rights Act.

It will be a long, bitter fight to win comprehensive reform, but isn’t our democracy worth it?