Could Jeb-mentum be real?: The GOP's "low-energy" candidate veers left — and New Hampshire loves it 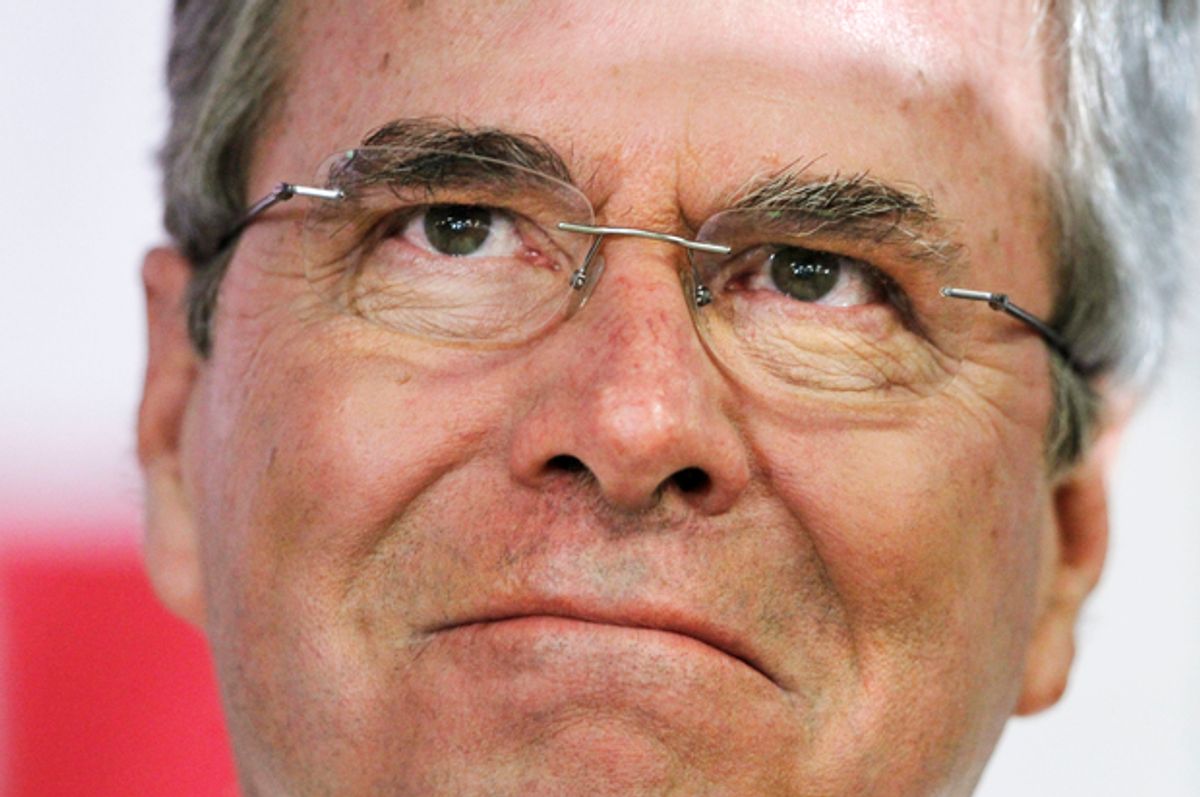 SALEM, N.H. — During four days in New Hampshire, I have attended only two events that did not feel as if they were primarily constructed as media spectacles, and as if they were using actual citizens or prospective voters mostly as props or design elements. One of those was the big Bernie Sanders rally on Sunday afternoon in Portsmouth, where a boisterous crowd of more than 1,200 crammed into a community college gym to bask in the Bern. The other was a Jeb Bush town-hall meeting, held in this outer Boston suburb at 10 o’clock in the morning. I’m not remotely kidding.

As much as this sounds like the kind of campaign-trail wishcasting you’ve read over and over in the New York Times, Jeb has Jeb-mentum. There is a Jeb-aissance happening on the ground in the Granite State. Jeb! Is! Surging! Now, I want to caution myself, and you, about the nature of this perception. Four days is more than enough to get swept up in the media epistemology of New Hampshire, in which events that don’t much matter are ascribed immense significance and those of us covering the campaign come to believe not just that we understand what is happening but that we are shaping or deciding the outcome. Although the whole New Hampshire ritual feels antiquated and this state of 1.3 million people (more than 90 percent of them white) is certainly not representative of the country as a whole, the famously ornery character of the New Hampshire voter ensures that such delusions are almost always wrong.

What I can tell you for sure is that more than 600 people showed up at the middle school on Salem’s main drag on Sunday morning, at an hour when respectable Republicans ought to be in church, and a whole lot more were outside peering through the doors. It was a distinctly different demographic from the audiences that Donald Trump and Ted Cruz get here, conspicuously middle-class to affluent and with a general mood closer to bafflement than anger. They came to see a guy who has been repeatedly mocked and belittled by the Republican frontrunner and the media since the beginning of this electoral season, the scion of a political dynasty who has spent tens of millions of dollars with no discernible results and who barely registered in the Iowa caucuses. They came to see the son and brother of former presidents argue for a return to what he calls “regular-order democracy,” and they ate it up.

John Kasich of Ohio, the other moderate afterthought in the GOP race, is also drawing big crowds here, although I haven’t seen him in action. Even the people who are good at parsing statistics and polling data have no idea what will happen here on Tuesday, but it wouldn’t take much for Bush and Kasich to outperform expectations well enough to stay in the race. (By finishing ahead of Ted Cruz, for example, and about even with Marco Rubio.) But the question of whether Bush can still win is arguably less important than the fact that he has identified a political and cultural vacuum abandoned by the rest of the GOP, and sought to fill it.

After repeatedly being confounded by the more-conservative-than-thou politics of the Republican race, Bush has made the counterintuitive decision (at least for now) to run to the left of his entire party, with the possible exception of Kasich. That’s a highly relative term in 2016, to be sure. But in terms of the policy positions I heard him talk about on Sunday morning, the differences between Jeb Bush and Hillary Clinton on a broad range of issues are more a matter of tone than substance. He said he was done badmouthing Barack Obama, and that Republicans could never win unless they convince voters they care about the poor and the disadvantaged. “I don’t think liberals are bad people,” he said, a sentiment you will not hear from Donald Trump or Ted Cruz or Marco Rubio.

More extraordinary still, Bush agreed with a questioner that climate change was a genuine threat to human society and said that “man has to have some influence” in that process. (That got a heartfelt round of applause.) He answered a young girl’s question about immigration by observing that it was more of a political issue than a real economic concern, since there has been a net outflow of undocumented migrants back to Mexico in recent years. (Then he introduced us to his Mexican-born wife, Columba, and told the admittedly charming story of meeting her in her hometown in Guanajuato.) He did not want to agree with one woman’s observation that Obamacare had provided benefits to middle-class families, but ultimately admitted that his own version of “repeal and replace” would incorporate some of its elements, such as guaranteed coverage for preexisting conditions.

As far as Republican apostasy goes, that’s a deadly trifecta, or at least it would be for a candidate who had anything left to lose. After absorbing months of Trumpian mockery, Jeb has essentially embraced it and reinvigorated himself as a tree-hugging climate wimp who literally loves Mexicans and has gone squishy on Obama, who according to the other candidates is either the second coming of Stalin or a bored, golf-playing Muslim princeling who can’t be bothered with governing. What’s next? Is Jeb gonna Hot Tub Time Machine himself all the way back to his dad’s era, when many Republicans were pro-choice and pro-immigration and favored some degree of gun control?

In political terms he might as well, because he lost the Republican primary voters who are obsessed about that stuff a long time ago. But even in this zany dice-rolling mode, no, I don’t think he’ll go there. Whether this newly moderate Jeb 4.0 can still be a factor in the GOP race remains to be seen. (On Monday morning Bush told the hosts of MSNBC’s “Morning Joe” that he likes campaigning in New Hampshire because “people actually let you complete a sentence in the English language,” which is not what you say if you imagine going back to Iowa for a general-election campaign.) To clarify what I said earlier, I’m not claiming there are no important political differences between Jeb Bush and Hillary Clinton, or that they would be interchangeable as president. Jeb wants to “voucherize” public education, for instance, and you won’t catch him talking about reregulating Wall Street, even in vague Clintonite terms.

But the moment Jeb is capturing in the New Hampshire snows is real, and reflects two interrelated phenomena. Many middle-class Americans who consider themselves moderate or conservative, first of all, feel alienated from the hateful and belligerent tone of the Republican campaign. Secondly, despite the populist upsurge that has destabilized both major parties, a whole lot of Americans — probably a majority — actually prefer the stable “regular-order democracy” represented by the Bush and Clinton dynasties. Even beyond that, most people simply do not consider politics an apocalyptic, life-or-death affair, and feel disoriented by those who do. I'm not saying those are good things, or that they are immutable truths that can never change. But any theory of politics or society that ignores the conundrum of the non-discontented middle is inherently flawed.

I met a 60-ish local couple named Ken and Donna at the Bush rally, polite but taciturn New England people out of some low-key realistic novel who preferred I not use their last name. They were both wearing the “Jeb!” buttons handed out at the door, but he might not get either of their votes. Donna said she had always been a conservative Republican and now felt torn between Bush and Kasich. None of the other candidates was an option. “What I’m looking for, first and foremost, is some degree of sanity and normalcy,” she said. Trump’s focus on immigrants and Muslims makes her uncomfortable. “I don’t like that at all,” she said. “It doesn’t make me feel good about his judgment.”

Ken said he definitely wasn’t voting for Bush, and after some prodding admitted that he was a liberal Democrat who “just got dragged along to see the show.” They had been married more than 30 years and raised adult children, so the fact that they held different political views and were likely to vote for different candidates was nothing new. They listened attentively to Bush’s answers and applauded the ones they liked. On their way out I asked Donna how Bush had done. “He did good. He did well.” Was she inclined to vote for him? She would wait till Monday to make her final decision. Ken leaned over the railing of the press enclosure and said, “He seems like a good man. But I’m voting for Bernie.” Then he took his wife’s arm and headed out into the brilliant winter sunshine, just in time for lunch.