White woman walks ahead: Jessica Chastain starring in a film about Sitting Bull is everything that's wrong with prestige films 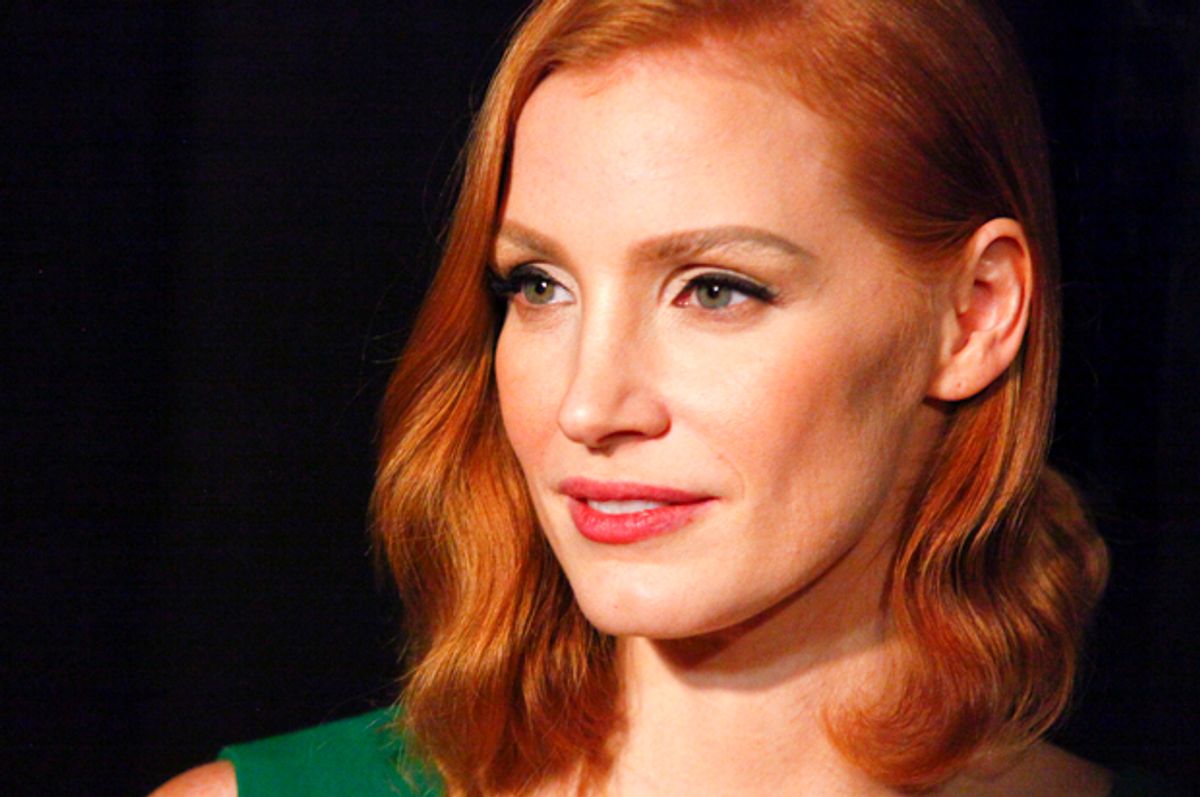 Activists have long pointed out that Native Americans get short shrift in just about every aspect of American life. The police kill Natives at the highest rates of any group, yet #NativeLivesMatter has generated virtually no attention. Numerous tribal water supplies are “worse than Flint,” with no corresponding public outcry; and if no Asian, Latino or black actors have been nominated for Oscars in acting categories for two years running, Native actors have a very slim track record of nominations throughout the history of the awards (Graham Greene received a supporting actor nomination for "Dances With Wolves," as did Chief Dan George for 1970's "Little Big Man.")

Tellingly, it is far easier to name films where Native Americans have been stereotyped (the entire western genre), woefully misrepresented (“Pocahontas”; “Last of the Mohicans”), or played by actors who are understood as white (Johnny Depp as Tonto; Rooney Mara as Tiger Lily), than it is to name major motion pictures where Native characters are fully realized as human beings. These limitations apply to “Dances With Wolves,” “Avatar” and the entire “Star Wars” franchise, which stick to normative fantasies about colonizing indigenous cultures on behalf of the white savior who, as Teju Cole summed up with unsparing clarity, “supports brutal policies in the morning, founds charities in the afternoon, and receives awards in the evening.” The past few months alone have seen Adam Sandler’s “Ridiculous Six“ and the art-house film “Of the North” heading straight for openly racist portrayals of Native and indigenous peoples, with their creators actually defending their dehumanizing positions in the face of withering criticism. Some would toss “The Revenant” into the company of that unenlightened dreck, as Native women have written that the Oscar-bait film left them feeling physically ill.

Against this backdrop, Variety announced that Jessica Chastain is in talks--since confirmed—to star in the period drama “Woman Walks Ahead.” Immediately, I thought of Makes-Loud-Noise, the “Indian princess” name that my boyfriend’s then very young daughter had given him years ago; crossed with Roger Vadim’s 1956 sex romp, “And God Created Woman.” In other words, the concept is silly and retrograde from the start. If you think I’m being fatalist sourpuss hater, read the reviews for 2015's “Queen of the Desert,” a Nicole Kidman vehicle about real-life explorer Gertrude Bell as white (woman) savior. It was ripped by critics for its hubris, but mostly for casting the vampire Edward as Lawrence of Arabia. According to the report, Chastain will portray Caroline Weldon, a “19th-century Brooklyn artist and activist who moved to the Standing Rock Reservation in Dakota Territory to help Sioux chieftain Sitting Bull fight to keep the land for his people.”

The basic problem is that “Woman Walks Ahead” is already being conceived and presented as a white-savior film, precisely because the narrative is being framed through Weldon's white feminist, righteous position of ally-ship with a dispossessed and marginalized people. The tragedy of history becomes a narrative shield that continues to legitimize the hideous fate of Lakota Sioux precisely because the story is mined for its tragedy ... and that's it. Must stories about Natives always take place in some mythologized past stocked with pintos and muskets? Is it so difficult to grasp that a fairy tale wrapped in museologically accurate buffalo robes is still a fairy tale? Frankly, the setup would be a lot more interesting if the film unfolded from the perspective of a young Lakota girl born and raised in the Standing Rock reservation, with a story line exploring her bafflement and anger at this random white lady who shows up to play interlocutor and scribe, while being utterly clueless about how to make poultices out of wild plants or anything that has to do with functioning as a whole person.

What would it take to get the film written in this way?  A female team of Sioux screenwriters, to start. But the bigger obstacle is Hollywood’s near pathological obsession with white-savior narratives, which become synonymous with the “prestige” film. “In the last quarter-century,” David Sirota wrote in 2013 for Salon, “10 White Savior films have received major Hollywood award nominations, with fully half of those coming in just the last five years.” No surprise, then, that since 2010, only two actors of color have garnered Oscars for acting, both times in "supporting" roles that position them as subservient to white authority: Octavia Spencer in 2012, playing a maid in “The Help,” and Lupita Nyong'o in 2013, as a slave in “12 Years a Slave.” In other words, as Kara Brown writes for Jezebel, “Hollywood has a problem with only paying attention to non-white people when they’re playing a stereotype.”

Small victories do not fundamentally alter the structural racism of the industry. “The reality is that if no scripts or films are made that include roles for Native people, roles that call for extraordinary acting chops,” wrote Sonny Skyhawk, “then we are excluded from the opportunity to participate in the yearly considerations for Golden Globe Awards, SAG Awards, and Oscars.” It's not a chicken-and-egg problem so much as an exclusionary system pretending to reward merit. As long as Oscar-bait films privilege white-savior narratives, actors of color will find it difficult if not impossible to get nominated for awards — especially best actor or actress — inside a system designed to prevent this.

Meanwhile, as Hollywood continues to treat Natives as plot devices in need of rescuing, television has given us one of the most complex, revisionist, defiant antiheroes in recent memory: Hanzee Dent (Zahn McClarnon). The breakout star of season 2 of “Fargo,” Hanzee is a Vietnam vet, a war hero, a criminal and a survivor. Amazingly, the writers didn’t whitewash his alienation from the community, his PTSD or the racism hurled his way as a Native adoptee in North Dakota--not so very far from where Sitting Bull met his brutal end.

In the end, Hanzee is the Man who Walks Away while stealing the show, a reminder, perhaps, that Natives were here first, and may outlast the sound and the fury‚ on-screen, as in life.