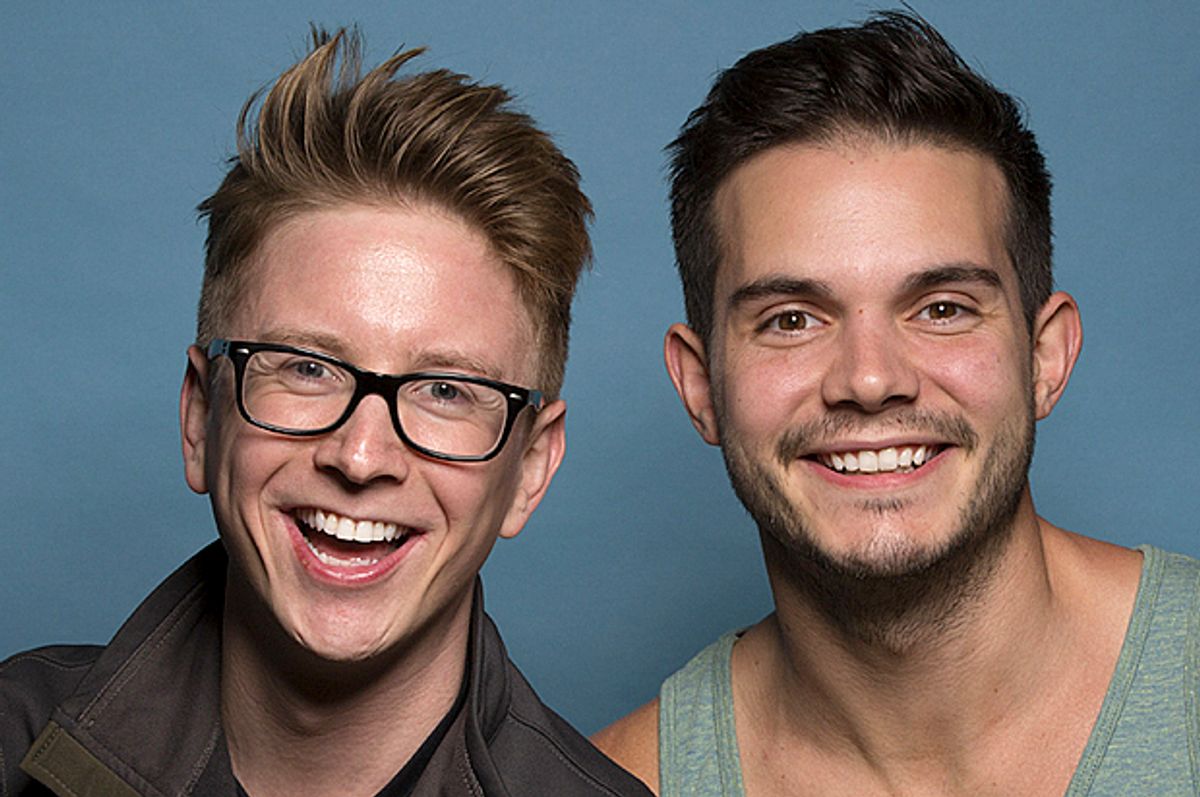 The new season of “The Amazing Race,” which premieres tonight on CBS, will have an almost incomprehensibly huge social-media reach considering the fact that the 11 teams are made up of social-media stars.

The biggest star of the bunch, though, is Tyler Oakley. He has candy-colored hair and a chipper, earnest delivery. He has 8 million YouTube followers and still introduces himself at the beginning of every video. He has a book (“Binge”) and a documentary (“Snervous”), and just co-hosted an awards show (The Streamys).

We caught up with Oakley as his “Amazing Race” partner and fellow social-media personality Korey Kuhl to chat about the show, their Internet lives, and where their careers might be headed next.

You know CBS is gonna read this, so tell the truth here: You’re YouTube guys. Do you actually watch TV?

Korey Kuhl: Watch TV? I watch a lot of TV. I’ve watched every season of “Amazing Race” as it aired for the last 15 years.

Tyler Oakley: Korey is obsessed with TV. He has a TV tracker app. He keeps up with a million shows at once. I’m a more casual watcher. I like to stream everything. Korey and I have been fans of CBS’s reality shows for a long time. I know that sounds like sucking up, but “Amazing Race,” “Big Brother,” “Survivor” — we’re obsessed with all of those shows.

And these are shows that have been around long enough that you probably watched them with your parents growing up, right?

Kuhl: Tyler and I are both from Michigan, and that’s where we met in college. When I still lived at home, I always watched TV with my family. Even when I moved to California, my mom still texts me about “Amazing Race” or “Survivor” and spoils things because she’s on the East Coast. I’m like, Mom, I’m not watching at the same time you are. Please stop spoiling things! [Laughs.]

Tell me about the first “Amazing Race” episode.

Kuhl: We haven’t seen it yet, actually, so we’re both excited to see it. We know what our team did that day in Mexico City, obviously. Sometimes we crossed paths with other teams at a detour or a roadblock, but we’re interested to see what everyone else’s race was like those two days in Mexico City.

Oakley: You go into it thinking you know your strategy and how you might work together, but it’s different when you get there. It’s pandemonium — especially at the beginning when you’re up against 10 other teams. You find yourself surrounded by people in a challenge, and the pressure is so high.

You have known each other ever since you went to college together, but you’re not a couple, right?

Kuhl: No. We met in college. I was his R.A. in the dorms at Michigan State University, and we were best friends almost instantly and have been best friends ever since.

Do you think the part of the Internet world that the two of you live around has changed a lot on gay issues and equality issues in general?

Oakley: I came from a pretty accepting community, and my school had a lot of openly gay and LGBT-plus people. When I joined YouTube, I saw a lot more hostility than I saw in my everyday life. Over the last eight years of being on YouTube, I’ve seen so much progress. I think the reason for that is that a lot of young people are having open dialogue and honest conversations about social justice and human rights. For young people online, those conversations that are happening online may not be happening in their schools or with their families, and they’re moving past prejudice and past hostility. The Internet is accelerating the speed of acceptance and social justice.

My impression has been that most social media creators have focused on a particular platform or couple of platforms — Korey is a podcast person, Tyler is a YouTube person, Cameron Dallas is a Vine person. Is that the way it is now?

Kuhl: Tyler and I both got onto YouTube when we were in college, and there wasn’t Twitter or Instagram or Vine. Now there’s more and more platforms and apps. If you want to make this you life and do this for a living, you’re going to have to spread yourself across those platforms. People will always have their favorites, but I definitely feel like people who want to be social-media influencers are going to have to reach an audience across different platforms.

Oakley: All of those mediums and platforms offer different types of people a chance to get involved. The type of person that might thrive on Vine in a six-second clip might not be the same kind of entertainer who would shine on a 10-minute vlog on YouTube. If anything, having these different platforms gives more people a chance to creatively express themselves.

Do you see younger consumers coming into the market and deciding that, say, Facebook is done because that’s what their parents use and now it’s all about Snapchat and next year it will be something else, or will some of these platforms have staying power?

Kuhl: Some of them will have staying power, but I relate exactly to what you’re saying. Sometimes, if I tweet something about Facebook, all of my replies from the younger people following me are like, Dad, what are you doing on Facebook! They make fun of it. Users are always going to find what they like, and maybe the up-and-coming audience will find a different platform. But Facebook and Twitter have found some staying power and are part of people’s day-to-day lives.

This season of “The Amazing Race” is all social-media people. Did you already know most of the other teams?

Oakley: Actually, I was really impressed at all the worlds that the people came from. I thought I would see people I had worked together with or had seen at conventions, but when I got there I saw a lot of unfamiliar faces and people that I knew about but had never interacted with. CBS got a huge variety of creators and entertainment people from all different parts of the industry — gaming, vlogging, beauty, Vine, YouTube, producers, viral stars, sports people.

What do you think about the idea of Internet fame — that you can be very well-known among even a large group of people but completely unknown outside of that group?

Kuhl: It’s an interesting aspect of the industry that you could be at a bookstore and see 10,000 people wanting to get a book signed, and the next day you can walk through the same bookstore without anybody recognizing you. A lot of people on this season have a huge influence but it’s with super-fans — people who actively support them, rather than casually support them like you would with a celebrity.

What do you think you’ll be doing in the next few years?

Kuhl: That is an exciting question. Last year, we couldn’t have predicted this year. The year before, we couldn’t have predicted last year. As YouTube and Internet culture grows, more and more opportunities are presented to these creators, and it really feels like the sky’s the limit. Our goal is to continue to have fun, continue to share our lives, continue to entertain, but we also realize that there are other mediums and forms where we may want to express ourselves creatively. We’re all at a point where we’re getting opportunities and able to try new things, and I think about YouTubers who have make-up lines or book deals or movies or tours. They’re opening doors for all of us.

And you have people like Burnie Burns transitioning into a Hollywood executive where he’s running shows and movies now.

Oakley: That’s a really cool thing about the people on this season. Burnie has a completely different approach than what we do, and I think that shows the depth of what’s happening on the Internet and the number of different ways you can be successful on the Internet. He’s more of a behind-the-scenes producer and other people are more entertainers, but we’re all finding a home and a career online.