Last week, Clinton slammed Sanders for voting against reform in 2007. But there was a very good reason he did 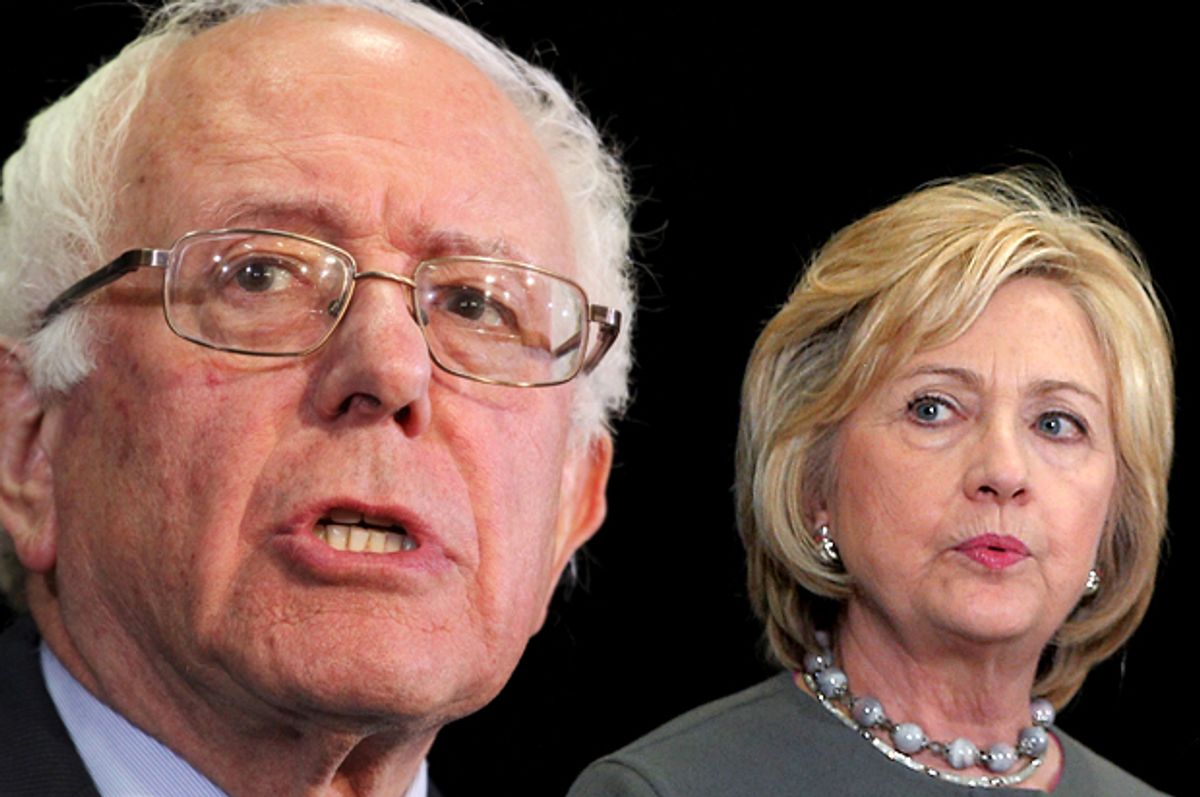 In last week’s battle over the meaning of the word “progressive,” Hillary Clinton charged that Bernie Sanders had fallen short in failing to back immigration reform in 2007.

“I don't think it was progressive to vote against Ted Kennedy's immigration reform,” Clinton said, after slamming Sanders for his past opposition to the Brady Bill. She repeated this line of attack last night.

The Washington Post’s Callum Borchers called this “a solid answer by Clinton.” If so, that’s largely because many don’t understand the substance or politics of guest worker programs. Many immigrant rights groups have long opposed guest worker programs, and for good reason. They are geared toward maximizing exploitation and minimizing protection of immigrant workers.

As Bill Chandler, Executive Director of the Mississippi Immigrant Rights Alliance and a board member of the National Network for Immigrant and Refugee Rights put it in 2013, they are “another form of indentured servitude and a benefit for employers, not workers.”

Critically, guest workers are often bound to just one employer, denying them basic leverage against an exploitative or abusive boss: quitting. If a guest worker quits, they may lose their legal right to stay in the country. Bosses hold a “deportation card” over their head.

Sanders voted against the 2007 “comprehensive” immigration reform legislation precisely because it included an expansion of such programs. The legislation split the labor movement, with SEIU supporting it and the AFL-CIO opposed.

“You have people being terribly exploited and if they stood up for their rights, they would be thrown out of the country,” Sanders said recently. “I happen to believe we do have to move toward comprehensive immigration reform and a path toward citizenship.”

Frank Sharry, who in 2007 was executive director of the National Immigration Forum, has conceded that it was a failed strategy to offer provisions intended to curry favor with Republicans because many at the end of the day would not come around to legalizing undocumented immigrants.

“That’s why I don’t get all worked up like ‘Bernie Sanders screwed us,’” Sharry told Bloomberg. “Upon reflection, we really realized that we had made a mistake, a strategic mistake, in allowing progressives to get divided in hopes of getting Republican votes.”

Immigration reform makes for strange-bedfellow politics. Guest worker programs are a business priority and anathema to labor. Immigrant right groups have split between the grassroots and establishment groups. Today, however, it is wrong to suggest that labor is caught in some sort of knee-jerk nativism—though it once was. The labor movement backs the legalization of undocumented immigrants in the country, which would empower workers and put an upward pressure on wages, and it opposes guest worker programs, which exert a downward pressure.

That’s why Sanders did, with reservations, vote for a 2003 bill that included provisions to increase the size of guest worker programs but also had better safeguards to protect immigrant labor.

“Sanders’ position…was more akin to the labor unions,” says Muzaffar Chishti of the Migration Policy Institute, who closely observed both the legislative debate over both bills. “By 2013, all the labor unions were on board…so it became possible for him to align himself with the rest of the Gang of Eight.”

Chishti says that the 2013 proposal met with labor approval because there were substantial improvements, including a path for temporary workers to become permanent residents and some allowance for guest workers’ visas to be “portable” to more than one employer, increasing their bargaining power on the job.

Currently, however, guest worker programs are rife with abuse.

BuzzFeed investigations have found that “many businesses go to extraordinary lengths to skirt the law, deliberately denying jobs to American workers so they can hire foreign workers on H-2 visas instead,” and “that many of those foreign workers suffer a nightmare of abuse, deprived of their fair pay, imprisoned, starved, beaten, sexually assaulted, or threatened with deportation if they dare complain.”

Rubén Hernández-León, Director of the UCLA Center for Mexican Studies, has found that  agents recruiting workers for H-2 visas in Mexico work both sides of the deal, picking up a payment not only from employers but illegally demanding them from workers as well.

The H-1B program, available for highly-skilled professionals, is also abused because the visas are sucked up by a handful of global outsourcing firms and then not available to those who truly merit them, according to investigations by the New York Times.

“Those firms have used the visas to bring their employees, mostly from India, for large contracts to take over work at American businesses,” the Times reports. “And as the share of H-1B visas obtained by outsourcing firms has grown, more Americans say they are being put out of work, or are seeing their jobs moved overseas.”

The programs combine the worst of capitalism and xenophobia, maximizing labor exploitation while minimizing social protections. Ideally, in a democracy, a worker is also a human with attendant social and political rights. The purpose of a guest worker program is to whittle that human down to nothing more than their labor power, says Kristin Surak, a politics professor at University of London.

“It’s one way to mollify employers and satisfy their demands…while not rousing the xenophobic ire,” says Surak, who studies temporary worker programs around the world.

In that sense, guest worker programs are fundamentally anti-immigrant in that they attempt to ensure that migrant workers are visitors and don’t immigrate.

“This is not anti-immigrant stance at all,” emails Hernández-León, when asked about Sanders’s position. “In principle, guest workers and immigrants are in two different sociological and legal categories. Guest worker programs are designed to bring labor into an economy while preventing its integration into society.  In contrast, immigrants, legal and not, integrate into the host society. Guest worker programs in the U.S. and beyond are plagued by abuse, exploitation and deceit by a migration industry of contractors, recruiters and other brokers and also employers, who often use foreign laborers to prevent unionization and to keep wages low.”

The confusion over the politics of guest worker programs is in part due to the partisan polarization over amnesty and, more generally, the media’s inability to cover issues that have more than two sides. The position advanced by the left in support of both labor and immigrant rights differs from both the corporate establishment and the xenophobic right-wing—and that message has never clearly gotten through to the general public.

“The problem with immigration policy generally is that it doesn’t always fall very neatly in the buckets that we’re used to politically,” says David Cook-Martín, a sociologist at Grinnell College. “There are progressives that are very concerned about class issues and workers, and there would be good reasons why they could be skeptical of guest worker, temporary worker, programs.”

The media has similarly failed to cover the politics of further militarizing the border with Mexico, a piece of “comprehensive” proposals that many immigrant rights groups staunchly oppose. The fact that in 2006 Senator Clinton voted in favor the Secure Fence Act, mandating a huge new border fencing and surveillance infrastructure, and that Sanders, then a member of the House of Representatives, voted against it, has prompted almost no discussion during the campaign.

Border enforcement and immigration raids against undocumented immigrants, like guest worker programs, all function to create a two-tier labor market beneficial to business, pitting workers with terrified workers with limited rights against citizens with more of them.

“There was another grove owner who was having trouble getting labor. So he walked across the street, went to our harvest crew, and offered them a nickel more per box to pick his oranges instead of ours. And the crew did that…And that was the day my father said, 'This is it. We have got to have more reliability in our labor force.’”

The mass reserve army of undocumented labor and guest workers both play to employers’ advantage. Guest worker programs, however, have two key advantages for business: Workers are typically restricted to just one employer and employers are not threatened with possible legal sanction for breaking immigration law.

Guest worker programs don’t work to keep people out of the country, because often people just stay. What the second-tier labor status accomplishes for business is to provide them with a labor force entirely inconsistent with the principle that any worker should have rights on the job and a voice in their society. Opposing guest worker programs is entirely consistent with supporting immigrant rights.