The science of swooning: We don't really know why some kisses lead to back kicks, toe curls and weak knees 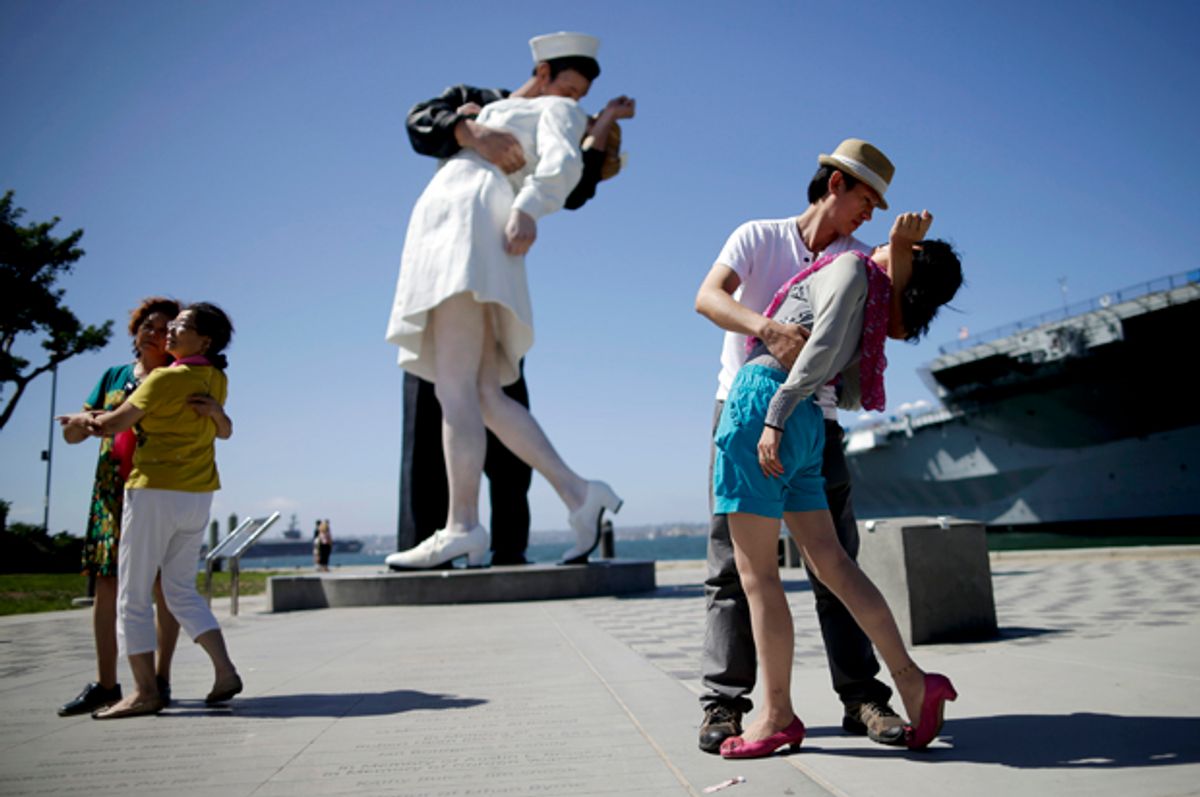 “When kissed for the first time, a girl should close her eyes. The second time, she should give an ecstatic back kick, clutching her sweetheart by his coat lapels.” These are the instructions from “An Outline of Motion Picture Etiquette,” written up in 1923. I’d always figured the “foot pop” for a romantic trope, a clichéd way to signal female desire with little to no bearing on reality. And then it happened to me. The kiss that made my eyes cross and my foot pop up as if yanked by a marionette’s string. Ten years in, I still get dizzy every time my boyfriend John plants one on me.

What is this “foot pop” business, exactly? The twee nonsense of flighty females? An involuntary response to stimulation, akin to the “knee jerk” that happens when the doctor whacks your patella? A corollary expression linked to sex hormones fluctuating in the brain?

Turns out that the foot pop isn’t well studied. “I don’t know of any data about why people (women?) raise their leg during a kiss in movies,” Justin Garcia of the Kinsey Institute told me via email. “I suspect it’s socially scripted -- a way to express passion, like a toe curl. But, I don’t think anyone has ever looked at how well that body movement is documented, and if so in what gender, and also, if so, what kissing behaviors elicit it.”

I asked the retired director of the Pacific Center for Sex and Society, Milton Diamond, if he knew of any research related to the neuroendocrinology of the foot pop. He didn’t.

“There is one, I think unpublished, study showing kissing increases oxytocin,” Garcia added. “People have suggested it also increases testosterone and epinephrine. That in essence you can give someone else a hormone shock to up-regulate sexual interest. But no good studies.” From the medical standpoint, he explains, “the big problem with those hypotheses is that we don’t know if there are receptors on our tongues/mouths/throats for the hormones in someone else’s saliva.”

In short: There’s lots of kissing in the world, and not much science on the subject. Yet we talk about sexual chemistry as if it was both self-explanatory and self-evident. “In one fun study,” Garcia notes, “50 percent of college students have kissed someone and known instantly there was no ‘chemistry.’ So, something is going on. You learn a lot about someone when you kiss them.” What if that chemistry wasn’t just feeling the zsa-zsa-zsu but a literal description of the underlying amoral mechanism driving sexual attraction?

I decided to do some unscientific investigating on the foot pop. Turns out that 21st century America is divided into two camps: not Republican or Democrat, but foot poppers and non-foot-poppers. It’s as controversial as seeing ghosts. If your couple has the foot pop, you totally believe it’s neither a mannerism nor a trope. If not, then …

“I wouldn’t know a swoon if it smacked me in the face,” architect Scott grumbles. He’s a single gay father.

“Foot pop?” I asked my professor friend Tracy. “No,” she replied curtly. She’s engaged, no plans on having children.

The majority of my respondents, irrespective of age, race, gender or orientation, have never experienced the foot pop. Overall, they struck me as being kind of irked by the topic.

The foot poppers, by contrast, were voluble in their enthusiasm and amazed at being in love, even the grandmas and grandpas. No men reported their own feet popping up, but several talked about seeing stars and feeling their hearts thumping in their chests, and they were aware that something special—beyond friendship, eroticism and lust--was in that first kiss with their beloveds. The women whose feet popped knew in that kiss that they’d found the one--even if, on the surface, that knowing wasn’t logical.

“Kevin and I vaguely knew each other in high school in the ‘80s,” Marjorie tells me. “After my major life change (leaving my marriage of 17 years) and moving back to be near my parents in Nebraska, I learned that Kevin had also recently moved to Lincoln in an effort to get out of an unhappy relationship. We commiserated online and decided to meet. Turns out he lived just blocks away. I was a nervous wreck waiting for him to drive over but when he stepped out of his truck, I knew…We were walking towards each other and we just walked right into the first kiss. I truly felt my knees buckle, he had to hold me up in his arms and I was holding onto him, and, yes, my leg popped up. I remember thinking about how cliché that was. Never happened before, has happened since. Best kiss ever!”

It was evident to both of them that their lives were meant to be shared, and they got formally engaged a year and a half later. Their wedding takes place soon.

A grounded, clear-eyed Midwesterner, Marjorie was in her 40s when she experienced the foot pop for the first time. By contrast, California girl Toni met Dave when they were both children, and they didn’t kiss until high school. That kiss made her weak at the knees, and her foot popped for the rest of their married lives.

“He would ask me out,” Toni explains, “but I was always going steady with someone else not at my school. But I did hang out with him at the River Club on weekends.  I always accepted the ride, it saved me a dime for the bus ride.  Ten rides gave me a dollar and I could buy makeup!  We were extremely poor at that time and lost our home. He never gave up! In his senior year and my junior year we both moved to Tracy and went to school together the last couple months of his senior year. He asked me to go steady every day for weeks but I wasn’t ready to be tied down at a new school with too many new guys to meet. I was a real flirt.  He used to drive me to town, where I worked as a carhop at Henry’s Drive-in, we lived in the country about 12 miles out of town.  One day he announced that if I wouldn’t go steady with him, he was going to move away. So, what’s a girl to do?” She laughs. “I had to get to work.”  That was April 14, 1965. They married April 21, 1968, three days after Dave’s 21st birthday, and were happily married until Dave recently and suddenly passed away.

Whereas bad relationships lead to Great Literature full of tension and tragedy, foot-pop love tends to come out sounding like a Nicholas Sparks novel. The tug of lasting attraction is surprisingly unlike the “sex-as-glue” that feels like Fate, and is so difficult to write about without resorting to sentimentalism or prurience that the last writer to take this on seriously was Johann Wolfgang von Goethe. His influential novel from the Romantic era, “Elective Affinities,” 1809, riffed on molecular affinities as a literary organizing mechanism for a story about the passions and pair-bonding of human couples struggling to choose whom they love...and whom they marry. Informed by the chemical revolution introduced by Antoine-Laurent Lavoisier, Goethe envisioned humans as neither animals nor angels but as intricate parts of a natural world illuminated by science.

We’ve since turned “chemistry” into a casual metaphor for sexual compatibility inside a new world awash in technology. Stumbling into hookups from “Sex and the City” to “Girls,” hipsters scoff at happy couples as either being delusional or sickening. But the next time you watch the “The Princess Diaries 2” and laugh smugly at Mia’s girlish ideas, it may be useful to also remember that she knew prince charming was the wrong man because her foot didn't pop--and prince charming knew it too.

There is nothing wrong with being single, and in fact there is a lot right with it. Far better to live with pets than cast in your lot with the wrong human. But for seekers of true love, it’s wise to remember Shakespeare’s words: "the course of true love never did run smooth." When one foot has popped up, running smoothly is out of the question. You have to hop. Together.