Could a horror movie set in the 17th century explain America's current insanity? See "The Witch," if you dare

Will you sign the book? A terrifying tale of Puritan-era witchcraft (maybe) explores the roots of American madness 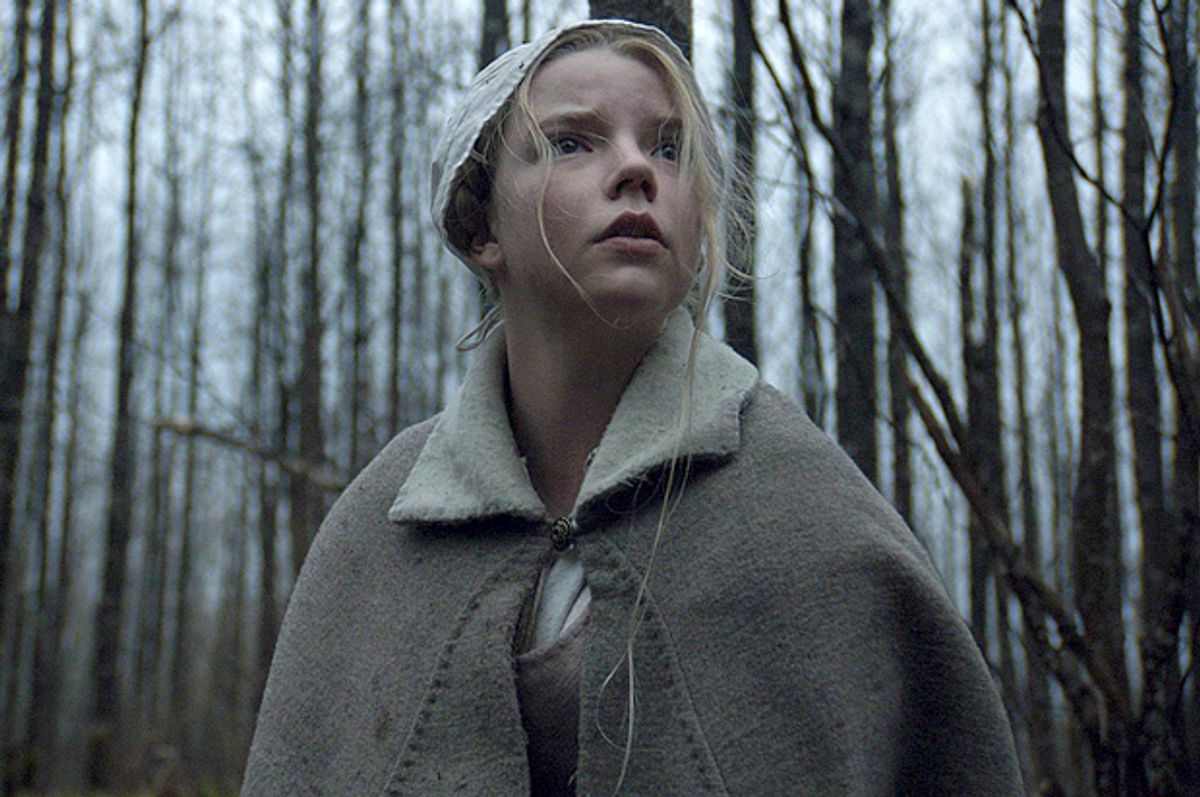 What possible relevance could a horror movie set in early colonial America — when the only “immigrants” were Puritans fleeing from the Church of England and the Crown — have to the specific grade of 21st-century Donald Trump insanity that has driven this topsy-turvy election year? A whole bunch, it turns out. Writer-director Robert Eggers’ intensely atmospheric “The Witch,” one of the breakout hits of Sundance 2015, has taken a full year to reach theatrical release. But in some ways its timing couldn’t be better.

Like any truly successful horror film, “The Witch” operates on various levels at once and is open to interpretation. You are free to roll your eyes at me for being tiresome and insisting that some parable about contemporary America is at work, since the society depicted in this movie doesn’t resemble ours in the slightest. Indeed, it’s barely society at all: No year is ever specified, but Eggers has said the setting is the 1630s, only a few years after the legendary landing at Plymouth Rock. (Which, like so many things in American history, was made up after the fact: The Mayflower first made landfall on Cape Cod, and even when it moved on to Plymouth nobody mentioned a rock.)

Will, a would-be farmer from the north of England (played by the tremendous Ralph Ineson), is such a religious zealot that he has accepted banishment from Plymouth Plantation rather than submit to its doctrines and laws. Although “The Witch” is not based on any specific historical incident, Eggers has done considerable research, and it was apparently possible to be too much of a Bible-thumper for the New England Puritans. So Will and his pinched and stretched-looking wife, Kate (Kate Dickie), and their five children must build an isolated homestead on the edge of the immense North American wilderness, facing an endless forest full of wolves, bears, potentially hostile Natives and other dangers they don’t quite understand.

What could possibly go wrong out there, for a group of lost and lonely English refugees in the middle of nowhere, obsessed with sin and damnation and the unknowability of God’s grace, as they slowly starve to death and not so slowly go nuts? For all his manly talk, scriptural gloom and unbending pride, Will isn’t much of a planter or a hunter. He repeatedly fails to shoot a wild rabbit who shows up several times. (It may not be coincidental that in both Native American and Celtic legend, rabbits or hares often appear as supernatural tricksters.) As his teenage daughter Thomasin (Anya Taylor-Joy) tells him later in the film, he’s a coward and a hypocrite who alternately deceives Kate and lets her boss him around.

Remember, this story takes place 60 years or so before the infamous witch trials in Salem, and none of the English-speaking people on this continent felt the slightest doubt that the devil was at work among them, seeking to corrupt and pervert their godly experiment. As in the Salem case, Satan’s easiest targets are girls and young women just past the onset of puberty, and his most powerful vector is the reality-distortion field of female sexuality. We first meet Thomasin, Will and Kate’s eldest daughter, as she kneels and confesses her abundant sins before God, admitting that she deserves shame and eternal hellfire but beseeching him for forgiveness in his son’s name. A luminous beauty of 13 or 14 — and the only one of the children who can remember their old life in England — Thomasin has become a disruptive force within her family, in ways that are not spoken out loud.

One afternoon, when she is caring for Sam, her newborn baby brother, he disappears, literally from under her nose. It’s both a mystery and an unbearable tragedy, but one of the creepiest factors of the story is the sense that Will and Kate are not all that surprised. They could feel that something bad would happen, or had happened already. But they couldn’t have imagined how bad it would get. Is Thomasin the witch of the title? Well, she says she is, at one point — but I promise that isn’t much of a spoiler. Her younger sister Mercy (Ellie Grainger), who is no more than 6 or 7, says the same thing about herself, in somewhat more specific and troubling fashion.

Is “The Witch,” under the surface, a story about sexual abuse, and about the vicious combination of guilt and jealousy that can poison relationships between mother and daughter, or between sisters? That’s certainly one way to read it. Is it, on a grander scale, an allegorical tale about religious hysteria and paranoid delusion, and even about the current of self-hatred and self-destructiveness that lies at the heart of the American experience? I would strongly argue for yes. But those aren’t mutually exclusive options — and it’s also a story about a well-meaning American family confronted by evil.

There is a witch in the woods, after all. We see her sneaking away with infant Sam, the unbaptized babe so crucial to certain diabolical rituals. Later in the film, we see her lure Caleb (Harvey Scrimshaw), Thomasin’s slightly younger brother, into her lair with a display of legs and cleavage entirely without precedent in 17th-century America. Is it relevant that we have already seen Caleb, a devout and loyal son, eyeing his sister’s body with the first stirrings of prurient interest? It might be. I’m sure someone will write a piece this week suggesting that Eggers is playing into misogynistic stereotype by implying that there may really have been child-killing witches in the New England woods, who could fly and who engaged in unorthodox sexual practices and who had signed their names in blood in the Black Book.

I’m eager to debate the remarkable ending of “The Witch” with you, or with someone, but we can’t do that right now. What I can say is that Eggers has specifically mentioned Stanley Kubrick’s “The Shining” and Ingmar Bergman’s “Cries and Whispers” as films that influenced his approach. We could throw in other contenders as well, like Michael Haneke’s “The White Ribbon” or the ‘70s British horror classic “The Wicker Man” or even Lars von Trier's profoundly disturbed "Antichrist." (Spoiler alert! Evil talking animals.) In each of those cases, insisting on some unitary interpretation of “what really happened” leads you down a nonsensical M. Night Shyamalan rabbit hole, as epitomized in the hilarious and terrifying documentary “Room 237,” about the competing realms of “Shining” truthers. (See also: David Chase and the final scene of "The Sopranos.")

Eggers’ subtitle is “A New England Folktale,” and demanding the truth about what happens in his movie, from the perspective of our supposed enlightenment, runs counter not just to folklore and storytelling, but to the life experiences of people who lived in the past. Did people of Thomasin’s time believe in Satan, and in witchcraft? Indisputably. Did some women of that profoundly misogynistic age believe they had sold their souls and engaged in sexual congress with the Dark Lord, as the only pathway to feminine power? Almost certainly. Did that era of religious torment and overt gender warfare and mistrust of outsiders, not to mention the profound self-loathing instilled by Calvinist theology at its most extreme, sow the seeds we still reap in America nearly 400 years later? Maybe. Of course, it’s easier just to blame the women.