Clinton has adopted notably more progressive language on identity politics this campaign. But to what end? 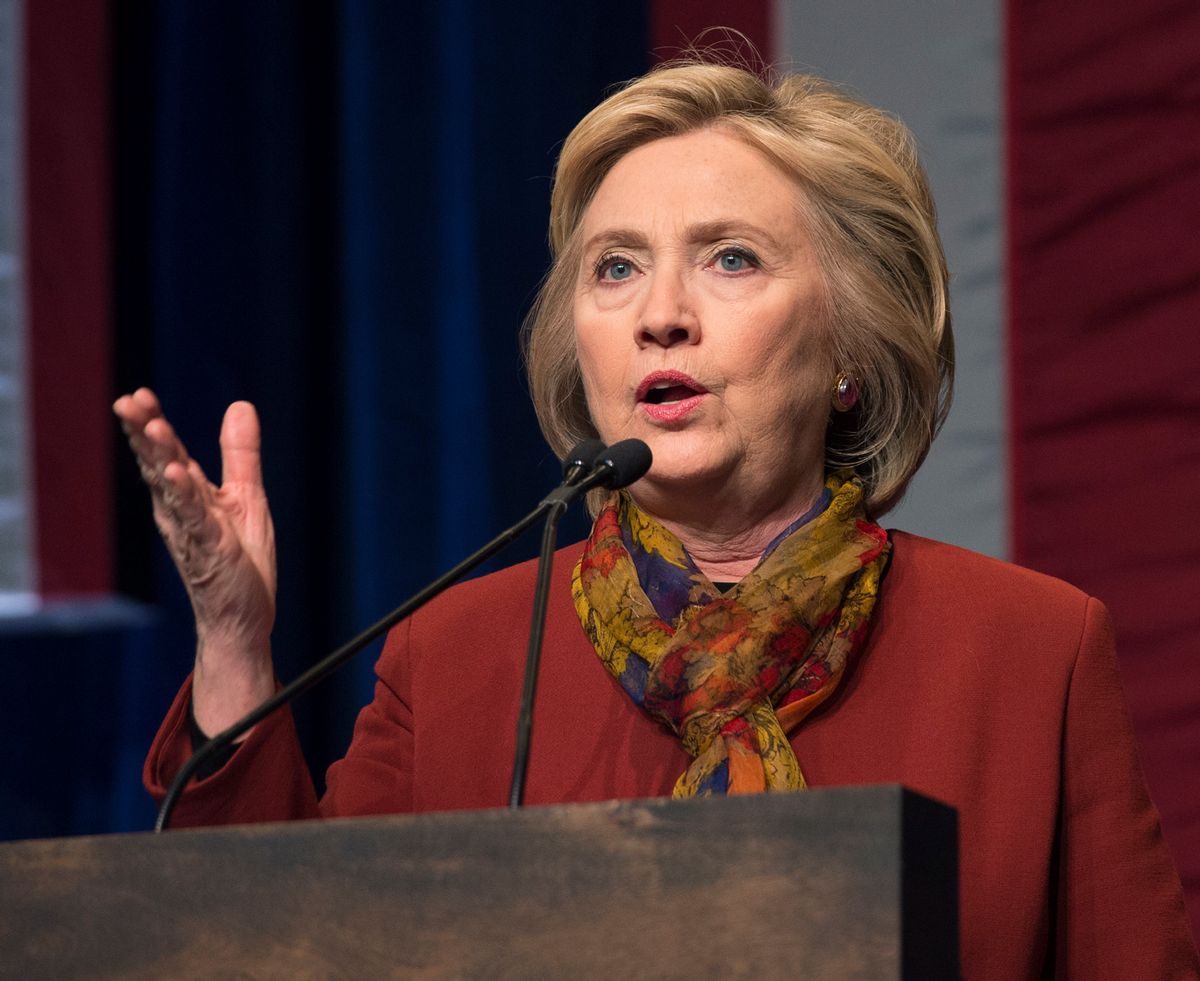 Hillary Clinton, scraping the bottom of the barrel in her attempts to discredit Bernie Sanders, is now repeatedly making the case that democratic socialism is too narrowly tailored to accommodate a true rainbow coalition. Never mind that the rise of Bill Clinton's corporate-aligned Democratic Leadership Council served to marginalize the forces represented by Jesse Jackson's actual Rainbow Coalition within the party.

"If we broke up the big banks tomorrow, and I will if they deserve it...would that end racism?" Clinton asked a Nevada crowd last week. "No!" they roared back again and again as she criticized Bernie Sanders’ purportedly single-issue agenda. "Would that end sexism? Would that end discrimination against the LGBT community? Would that make people feel more welcoming to immigrants overnight?"

"No!" “No!” and “No!” the shouts came, refracting across the funhouse mirrors of 20th century liberal politics.

Clinton is panicked, terrified that a growing number of non-white voters will not back her reflexively in the Democratic primary. Seeping in through polls and pronouncements geared to manage expectations ahead of the Nevada caucuses, there is a creeping sense that Sanders might just attract not only white women but a surprising number of the people of color that pundits describe as Clinton’s “firewall.” This is American politics at peak neoliberalism, where a distorted version of identity politics is used to defend an oligarchy and a national security state, celebrating diversity in the management of exploitation and warfare.

“I think it’s very cynical,” says Rutgers historian Donna Murch, the author of a recent New Republic article titled “The Clintons’ War on Drugs: When Black Lives Didn’t Matter.” “Saying that political economy doesn’t matter to black people, I think that that is terrible. Especially when you look at the impact of what happened with the subprime crisis.”

Clinton, who not so long ago bragged that Obama had failed to attract the support of "hardworking Americans, white Americans,” is now tweeting through the lens of intersectionality and entreating white voters on the campaign trail to “recognize our privilege and practice humility.” Clinton, however, is using racial justice against class-based grievances as a tool to attack Sanders from the right. Her campaign has gone so far as to suggest that Sanders’ pledge to make public universities tuition-free is racist because it would exclude private historically black colleges and universities. Only this campaign, this year, could cause a Democrat to suggest that free public education is racist.

What “identity politics” means depends on whom you ask: It can apply to racial, sexual, gender or national movements of all stripes, and it is by no means necessarily hostile to class politics. But in the Clinton campaign’s hands, and in the prevailing neoliberal rhetoric that champions boardroom diversity as political triumph, it most certainly is. The thing about Clinton's newfound identity politics crusade that has planted so many palms across left-wing faces is that Clinton is brazenly channeling the latest racial and gender justice discourse to block a racially diverse working-class assault on the oligarchy she has long defended—it's just too much. All of the important struggles that Clinton cites cease to be intersectional the moment they are abstracted from political economy.

In making her case this way, says John Hopkins political scientist Lester Spence, Clinton is trying to tap into a strain of black political thought dating back to “the early 20th century," which elevates race as the primary and shared concern of all black people regardless of their station in life. In doing so, she is insinuating that class struggle, despite the disproportionately high number of poor people who are black, is a luxury for whites. The marginalized majority battered by poverty, mass incarceration and welfare reform—trends presided over in significant part by Bill Clinton—are expected to fall in line.

Clinton, writes Boston Globe columnist Derrick Z. Jackson, is trying to distract from the fact "that Wall Street investors and bankers play a huge role in discriminatory redlining, predatory lending, and foreclosures," as she "shamelessly counts on blacks for support while she is engaged with the system that holds back the aspirations of too many black people."

This campaign has made clear like never before that the media treats black people like aliens to be understood only across the divide of “race relations,” interpreted through a leadership class taking part in a “national conversation about race.” This group therapy approach renders poor black people an illegible "urban underclass,” either inscrutable or contemptible. Consider that major black politicians, from Obama (did she mention that Sanders has dared criticize Obama?) to former Philadelphia Mayor Michael Nutter, relied upon an insulting pathologization of the black poor to garner legitimacy.

It’s not a question of pitting race against class. It’s a matter of asking what political work gets accomplished by framing the crisis in Flint, Michigan, a city that is both racially diverse and almost universally poor, as mostly a problem of racism. Political scientist Adolph Reed writes about New Orleans, where Mayor Ray Nagin leveraged the status of black homeowners after Katrina so as to embrace a “chocolate” city that excluded poor renters (not too mention public housing residents). Housing and school segregation patterns and incarceration rates demonstrate that class cannot, without race, explain inequality. But race politics, in the hands of oligarchs, narrows the scope of what’s politically possible by justifying class-based inequities that impact poor people of all races as a reflection of fair market value.

Last week, Clinton performed that very sort of sleight of hand, mobilizing Congressional Black Caucus members to not only bash Sanders but chide young black voters for their naiveté.  The entity that actually endorsed Clinton, however, was the CBC PAC, governed by a 20-member board that includes 11 lobbyists working on behalf of companies including student loan giant Navient, Newport cigarette maker Lorillard Tobacco, and OxyContin manufacturer Purdue Pharma, according to the Intercept.

Clinton hopes black voters are a monolith, and treats them as such

Generally speaking, Clinton’s strategy is to secure across-the-board support from party elites and leaders of established liberal and constituency-based organizations. This approach reaches its zenith with black voters, who the strategy presumes are more eager to do whatever leaders tell them than others. It’s an approach reminiscent of how immigrant voters were described during the Tammany hall era of urban political machines. In the process, a lot of internal political conflict and difference within the black electorate is obscured.

“The way Clinton talks about racism and homophobia ignores class,” emails Spence. “How a given voter feels about her claims, whether they are legitimate or not, may be shaped by” whether they see class or race-based oppression as their primary concern. “But it may also be shaped by what a given voter thinks about Clinton in general,” which, he says, may depend on how they read her motivations.

This is especially true when it comes to Clinton’s nonstop embrace of Obama, and the denigration of Sanders for having criticized him. “The kind of criticism that we’ve heard from Senator Sanders about our president, I expect from Republicans,” Clinton said in last week's debate, part of an increasingly vocal emphasis of her ties to the president that analysts have described as a clear appeal to black voters.

"The limits of identity politics should be clear after electing President Obama twice,” emails Khalil Gibran Muhammad, director of the New York Public Library’s Schomburg Center for Research in Black Culture and the author of "The Condemnation of Blackness: Race, Crime, and the Making of Modern Urban America." “Clinton’s attempt to attack Bernie for his criticisms of Obama are not playing well among young voters who seem unwilling to fall for the symbolic significance of another first…They’ve seen the limits of symbolic firsts and they are now interested in having a values debate and a clear discussion about the issues.”

In the 1990s, Bill Clinton puzzled over how to renew the Democratic Party’s appeal to white voters even as he pursued policies, like NAFTA, that eviscerated the white working class’s organizational connection to the party: unions. By taking big picture economics and multiracial working-class coalitions off the table, the New Democrats for whom Clinton was the standard bearer would ultimately land on attacks against black poor people as the sole tool to gain white support. What’s most revolutionary about Sanders’ campaign, in that context, is that it is premised on undoing the New Democratic knot, uniting working people of all races to take on the very elite that Clinton fostered, and that ultimately defined the contours of President Obama’s outlook and agenda as well.

The economic crisis, President Obama’s failures, and the growing understanding that the Clintons played a lead role in building mass incarceration may have changed the calculus of what is possible for some black voters—young people in particular. At this point, Clinton clearly has majority support from black voters. But a recent Reuters poll shows Clinton’s huge lead among black voters in general narrowing precipitously among youth. The rift has emerged in the CBC itself, BuzzFeed reports, where many younger staffers are aghast at their elder’s broadsides.

“I’ll kiss the ring of whoever my party nominates, but right now I’m with Bernie and I’ve seen the behind the scenes efforts to discredit and suppress him,” said one CBC staffer. “It’s not us and it’s not the way we should be approaching this.”

What pundits have objectified as a "firewall" turns out to be, in reality, a complex, heterogenous population made up of people with different opinions  and interests. As a result, Sanders’ political revolution might constitute “the closest thing to real competition for the black vote in the modern era,” according to Spence.

The Clintons rose to power by marginalizing the left and dividing working people against each other. Little, it seems, has changed.