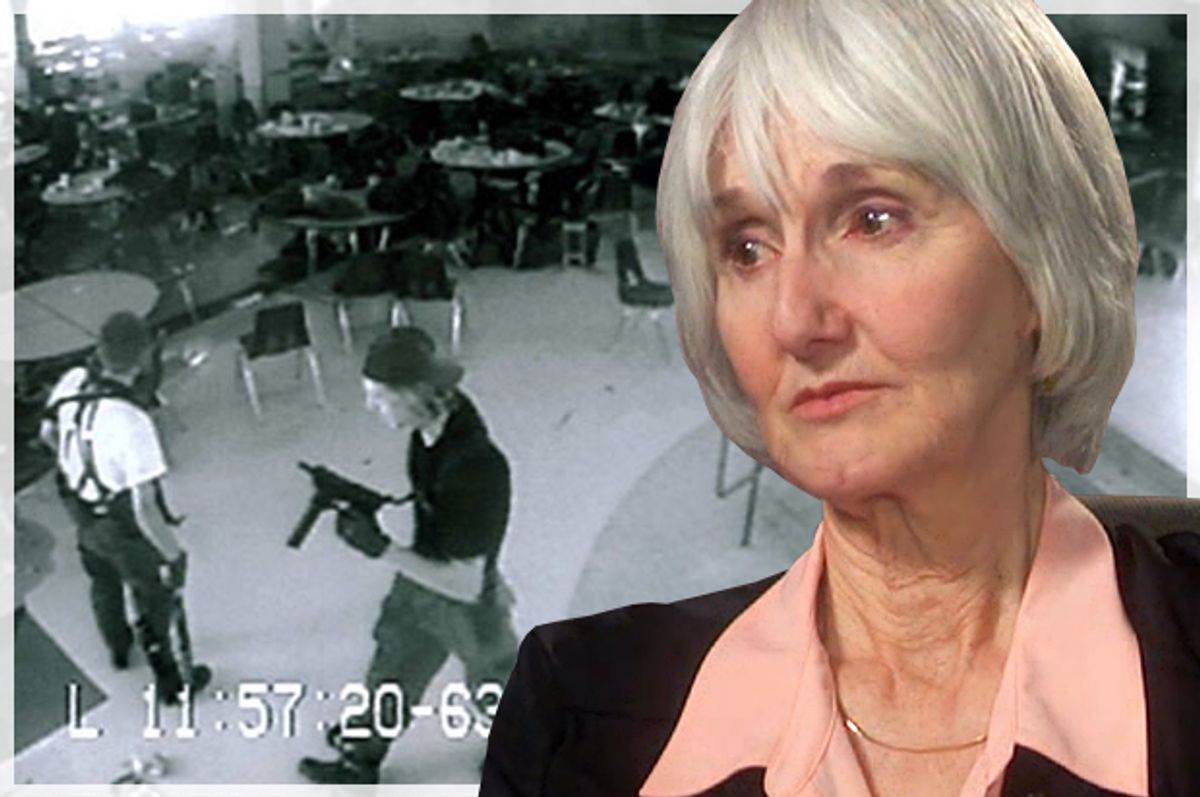 The media's role as the gatekeeper of whiteness cannot be overstated. There is no greater tool in constantly shaping and reinforcing the association of whiteness and white people with integrity, benevolence and superiority. This perpetual humanization of whiteness has the obvious, and perhaps deliberate, effect of dehumanizing blackness.

That's the difference in black and white in America. When white people commit unspeakable acts, journalists spend years -- decades even -- on tireless expeditions digging through the killer's life, talking to investigators, schoolmates and co-workers, trying to find some redeeming quality in the accused. Apologetic, tearful loved ones tell Diane Sawyer or Matt Lauer how the devil everyone knows is not the son they raised, the brother they grew up with or the husband they married.

No attempt is made to redeem black killers. That’s the obvious takeaway. The truest display of the purification of whiteness at the expense of blackness, though, is not found in how black killers are treated in contrast to white ones, but how the media tries black victims while bolstering the defense of white killers.

In the past week, press surrounding the release of "A Mother's Reckoning: Living in the Aftermath of Tragedy," a memoir by Sue Klebold, the mother of then 17-year-old Dylan Klebold, the Colorado teen who conspired with a friend to plan and execute the murder of more than a dozen people at Columbine High School in 1999, provides virtually irrefutable evidence of the media's steadfast commitment to upholding the imagery paramount to the denial of systemic racism. The reviews of Klebold’s book are a quintessential demonstration of the ongoing campaign to preserve white humanity, no matter the cost, as the kind of tenderness and empathy one would expect to be reserved for victims is afforded to this mother, providing a platform for her to sand, buff and repaint the monstrous image of her son.

The Washington Post describes Klebold's memoirs as a "mother’s love letter to her son, for whom she mourned no less deeply than did the parents of the children he killed." With the callousness characteristic of the boundless audacity employed to protect the narrative of the inherent goodness of whiteness, this mother is positioned as not merely "the mother of a killer " but "one of his victims, too," somehow balancing the scales of sorrow, grief and despair equally between the woman who raised a murderer and the loved ones of that murderer's victims. Yet, in a piece the Post ran nearly three years ago, "Richard Cohen: Racism vs. Reality," another 17-year-old involved in a murder, and his mother by proxy, were not afforded that sympathy. Despite the fact that Trayvon Martin was the victim and not the killer, the author explains that while there’s no doubt that Zimmerman “profiled Martin and, braced by a gun, set off in quest of heroism,” Trayvon was “understandably suspected because he was black,” in an opinion piece piled with double talk that attempts to simultaneously legitimize and condemn the racial profiling of black men and boys, specifically those wearing the hoodies now synonymous with Martin. Noticeably, though, the Post’s recent coverage of Dylan Klebold’s crimes neglected to mention the black trench coats he and his accomplice wore.

In an even more illustrative display of the practice of redeeming whiteness, the New York Times reviews Klebold’s memoir with a fervor best likened to that of an attorney desperate to obtain clemency for a client scheduled for execution. The review notes that Klebold describes the life she and her husband provided for their son as “if not perfect, better than ordinary,” going on to explain how "A Mother’s Reckoning" recounts that “Dylan grew up with happily married parents: a work-from-home dad who shared a snack and the sports pages with his teenage son every day after school, and a mom who worked with disabled college students, setting a moral example at the office before coming home at night…”

With words meticulously chosen, the Times stresses how the boy’s parents did all that could be expected to raise him to be a good person. A reference to Dylan’s arrest for breaking into a van in his junior year of high school seems presented only to highlight Dylan’s rapid rehabilitation, noting that he “sailed through a counseling program offered as an alternative, even graduating from it early.” That pat on the killer’s back for cleaning up milk he spilled is typical of the lens through which white criminals are viewed. Conversely, the Times described 18-year-old Mike Brown, a victim of a police shooting, as “no angel,” mentioning that Brown “lived in a community that had rough patches, and he dabbled in drugs and alcohol.” That we still know more about Mike Brown’s upbringing than that of his killer, Darren Wilson, is indicative of the trial black victims face in the media.

Even with its criticism that Klebold's book "doesn't dig deep enough," the Boston Globe still lends sympathy and understanding to the mother of one of the boys infamous for forcing the term "school shooting" into our lexicon. The reviewer assesses that it is "as if the writer [Sue Klebold] were reluctant to dig into her story in the first place," going on to wonder, "Who could blame her?" Klebold, the writer expounds, "endured one of the most horrifying ordeals that any parent could face — her son’s death, along with the anguished questions of how the boy she raised became a murderer. She was vilified in the media, endured cancer, bankruptcy, and divorce." The latter details of the financial, health and marital issues Klebold battled seem offered strategically, inserted to highlight how life plays no favorites. This woman, who reared and raised a child who, for whatever reason, killed 13 people, is painted as the ultimate victim fighting a hybrid grief — grappling with the fact that she raised a monster and the eternal pain of losing a child.

These are stark contrasts to the categorizing of the mother of Freddie Gray, the young man killed at the hands of Baltimore City police in April 2015, as “an illiterate heroin addict” by CNN. As the mother of a killer is being granted the benefit of the doubt, the mother of a victim is being denied her dignity.

Still, the most dangerous commonality of these reviews is the references to the book’s discussion of Dylan’s mental illness. This focal point has the effect, however unintentionally, of virtually absolving his parents of any responsibility. The greater impact of this narrative is simultaneously and preemptively exonerating the parents of, and crafting the defense for, the next Dylan Klebold. Discussing mental illness as a motivator in under 1,000 words further stigmatizes those who battle chronic mental conditions, while advancing the narrative that white killers are almost always driven to evil by psychosis or depression.

I have not nor do I plan to read Sue Klebold’s memoir. As such, I am in no position to review her book. I don’t doubt that she loves her child. Nor would I seek to deny any parent the opportunity to redeem herself or attempt to redeem the child she lost. But those opportunities for redemption have been denied to women like Sybrina Fulton and Leslie McSpadden, the mothers of black boys whose attempts to present the loving child they knew are characterized as opportunism and exploitation. These women have been forced to defend their parenting, explaining that they did not raise the “thugs” the media is portraying, allowing the boys a quasi-victimhood at most, one that assigns the burden of their deaths to their actions.

Sue Klebold is donating all the proceeds from sales of “A Mother’s Reckoning” to charity, an act the reviews note proves her motivation is not financial. I can’t argue to the contrary, but the profits forgone could never compare to what she’s already been given: redemption, humanity and pardon.