The trouble with Duckie: How "Pretty in Pink’s" most lovable character gave a generation of teenage boys the wrong idea

I, too, saw myself in John Hughes' nice guy—and like so many others, I learned all the wrong lessons from his story 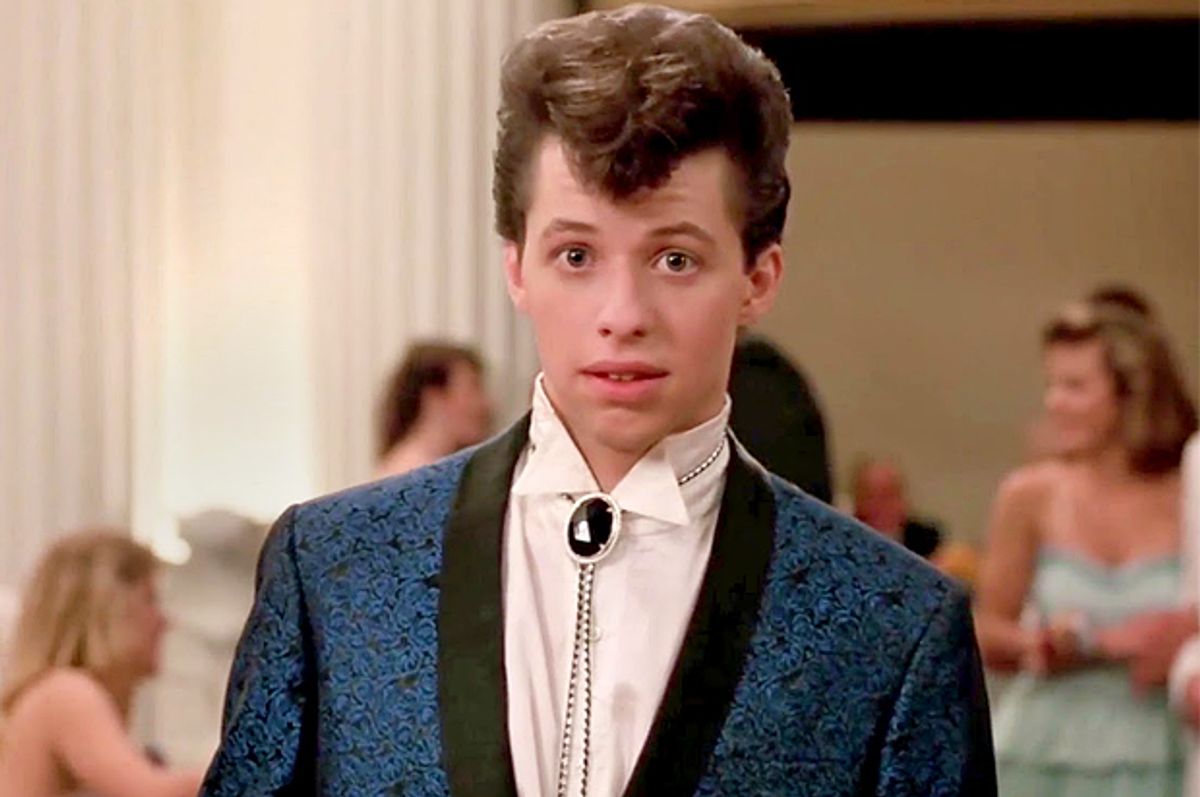 Find me an American adult male who identifies with Blane McDonough, Andrew McCarthy’s character in 1986’s "Pretty in Pink" and I’ll show you a giraffe wearing a prom dress. Blane is the rich, handsome, well-meaning teenager who falls in love with the movie’s protagonist, a young working-class woman named Andie Walsh played by Molly Ringwald. Blane loves Andie’s strength, individuality and beauty. Andie loves Blane’s kindness, devotion and beauty. They end up together in a memorable kiss in the parking lot outside the prom, an ending that still infuriates a critical mass of the fanbase of "Pretty in Pink," which celebrates its 30th birthday this weekend. Those fans thought Andie should have kissed her best friend Phil “Duckie” Dale (Jon Cryer), a fellow working-class kid in thrift-store finery who loves her and can’t seem to tell her so.

To identify with a privileged dreamboat like Blane, even though McCarthy plays him with great sensitivity and longing, feels either like being too proud of being rich, popular and handsome yourself, or like cheering for Big Tobacco in a class action lawsuit. Instead, a generation of American male teenagers, me included, saw themselves in Duckie—charming, quirky and overlooked. Duckie belonged an elite gang of best friends "Pretty in Pink" screenwriter John Hughes made the beating heart of his ’80s teen filmography—Cameron Frye in "Ferris Bueller’s Day Off," Farmer Ted in "Sixteen Candles" and Watts in "Some Kind of Wonderful"—characters who embodied the pain of being young and not yet able to be honest about your own desires.

Beyond Hughes’ other sidekicks, “Duckie” has become synonymous with “weird friend thrown over for safe, popular choice,” adolescent canon reinforced by a generation of boys who mimicked Duckie—in dress, manner and seduction—to joke and serenade their way into the hearts of their dream girls.

Disciples of Duckie, we had it all wrong.

No, you don’t get to be with the girl of your dreams just because you want to. No, you don’t get to avoid telling her how you feel and then resent her for showing interest in another guy. No, it’s not romantic, but rather a little sad that you can only express how you feel to her father and in charming but empty gestures like lip-synching Otis Redding’s “Try a Little Tenderness.” And no, you aren’t an unsung hero because your dream girl doesn’t dream of you. You’re a bad best friend for not respecting her decisions and thinking that means her love for you isn’t worth anything.

Re-watch "Pretty in Pink" and Duckie comes off not as a role model but as a cautionary tale about what we can destroy while growing up: The movie may end happily for everyone — even Duckie, who doesn’t win Andie’s heart but nobly tells her to forgive Blane for canceling on taking her to the prom. Before all that, Duckie comes dangerously close to losing Andie forever: Not 30 seconds after the Otis Redding serenade, Blane shows up to take Andie on their first date. Duckie, not knowing about the date, accuses Andie of disrespecting herself by going out with a rich guy, and then threatens to not be there (i.e., not be her friend) if she gets her heart broken.

Never mind that Duckie doesn’t know Blane and has no claim on Andie, and, since Andie is a smart, self-possessed, attractive young woman, she has probably received this kind of attention before. Since Andie and Duckie have been friends since childhood, Duckie having his world rocked when Andie goes on a date feels less like unfairness and more like Duckie ignoring an entire adolescence's worth of evidence that Andie isn’t just his pal or his valentine, but a woman and a person in her own right.

“But Duckie’s pain was real!,” I just heard a squad of ex-Duckies cry. I used this excuse to not grieve my own teenage heartbreak but instead make it the heartbreaker’s fault. I wish had known better than to think my high school best friend/crush would fall for me after months of not letting on, and then getting mad when she fell for someone else, and in between trying to woo her with a lip-synch performance (mine was Mötley Crüe’s “Home Sweet Home.” Laugh all you want.). I can only imagine what it would have been like for a girl in Andie’s position who likes a guy who likes her and doesn’t want to hurt her best friend, who seems have trouble being straight with her anyway.

I wish someone had clued me -- and teenagers like me -- in to the realization that writer Todd Goldberg outlined in his 2007 essay “That’s Not a Name, That’s a Major Appliance: How Andrew McCarthy Ruined my Life”:

After I realized that being Duckie was a recipe for being a complete and total reject… I came to the first day of school just as me. I climbed the social ladder because I simply didn’t give a fuck anymore, which is apparently very attractive to young men and women alike.

But even Goldberg’s about-face on the Way of the Duckman acknowledges both the character’s power and its limitations. It’s Jon Cryer’s most fully realized performance, outdistancing in 96 minutes the 13 years he’s put in as Alan Harper on "Two and a Half Men." And Ringwald, killing it in a movie written for her, is both tender and firm at once, making Duckie’s behavior seem not righteous but misguided. First-time director Howard Deutch chose Cryer for the role and skillfully gave the character a room of his own apart from the love story, but also room to change more than any other character in the film

John Hughes originally wrote "Pretty in Pink" with Blane leaving the prom and Andie and Duckie ending up together — if not romantically, then at least geographically on the dance floor. Test audiences booed this ending, so the filmmakers reshot it to have Andie and Blane end up together, which test audiences liked a lot more. Fans who hated the change refer to it as “Duckiegate,” highlighting the seeming unfairness of the quirky kid having to sacrifice the object of his love because her popular cute boyfriend isn’t actually the jerk the quirky kid thought he was.

The other way to see this ending is to take both Cryer’s word for it when he told author Susannah Gora, “The whole movie seems to be about trying to bridge that divide between rich and and poor… You can’t send the message that interclass romances can’t possibly work,” and Ringwald’s. Ringwald campaigned for McCarthy to get the role of Blane because he wasn’t a square-jawed GQ model like Michael Schoeffling (Jake Ryan in "Sixteen Candles") but rather what the film’s producers called “a shy twerpy little guy” and what the actress called “definitely the kind of guy I would fall in love with.” In other words, Ringwald saw her character having a best friend like Duckie, yet also falling for a guy with a whole lot of Duckie-like qualities.

Thirty years on, Phil “Duckie” Dale is no longer a movie character but a constellation of archetypes and aspirations—high school iconoclast, ’80s dream boyfriend (second only to "Say Anything's" Lloyd Dobler and his boombox), smart(er) romantic choice (“Team Duckie” t-shirts are way easier to find and probably sell a lot more than the “Team Blane” alternative”), knowing cultural signifier (the movie’s 25th anniversary DVD is called the “Everything’s Duckie” edition) and gay icon.

Ringwald and Cryer came to an agreement on that last one at an EW-sponsored 25th anniversary photo shoot in 2010. Before that, Cryer was on record as saying he never saw that in the character and thought there should be a place onscreen for heterosexual guys who were dorky and weird. Perhaps more importantly, both he and Ringwald agreed that although Blane and Andie do not date long-term, Duckie and Andie will likely be friends for the rest of their lives.

The world we live in is far more Duckie than Blane. Quirky has moved from the fringe to the center of teen cinema — without Duckie as a supporting character in "Pretty in Pink," we would have no children-of-Duckie as the main characters of "Juno," "Perks of Being a Wallflower," "Paper Towns" and "Dope." The elaborate “will you go to the prom” performances teenagers now put on for prospective dates are a blend of Duckie’s “Try a Little Tenderness” and, well, the prom. Duckies are Mark Zuckerbergs, Trevor Noahs and Joss Whedons. Blanes are the guys in khakis giving them money and trying to stay out of their way.

What we acolytes (Duck-alytes?) should have learned from Phil Dale was not who he was but who he became, not what he did but what he learned. Of all the characters in "Pretty in Pink," Duckie grows up the most and narrowly avoids losing what his creators see as a lifelong friendship. I fear most of us junior Duckies missed that entirely and instead glommed onto how justified we felt Duckie was in his anger and hurt. We probably lost a lot of best friendships along the way.