I can explain #OscarsSoWhite in 2 words: "Annie Hall"

When we look at the films Hollywood values, it's clear that white standards of "merit" set the rules 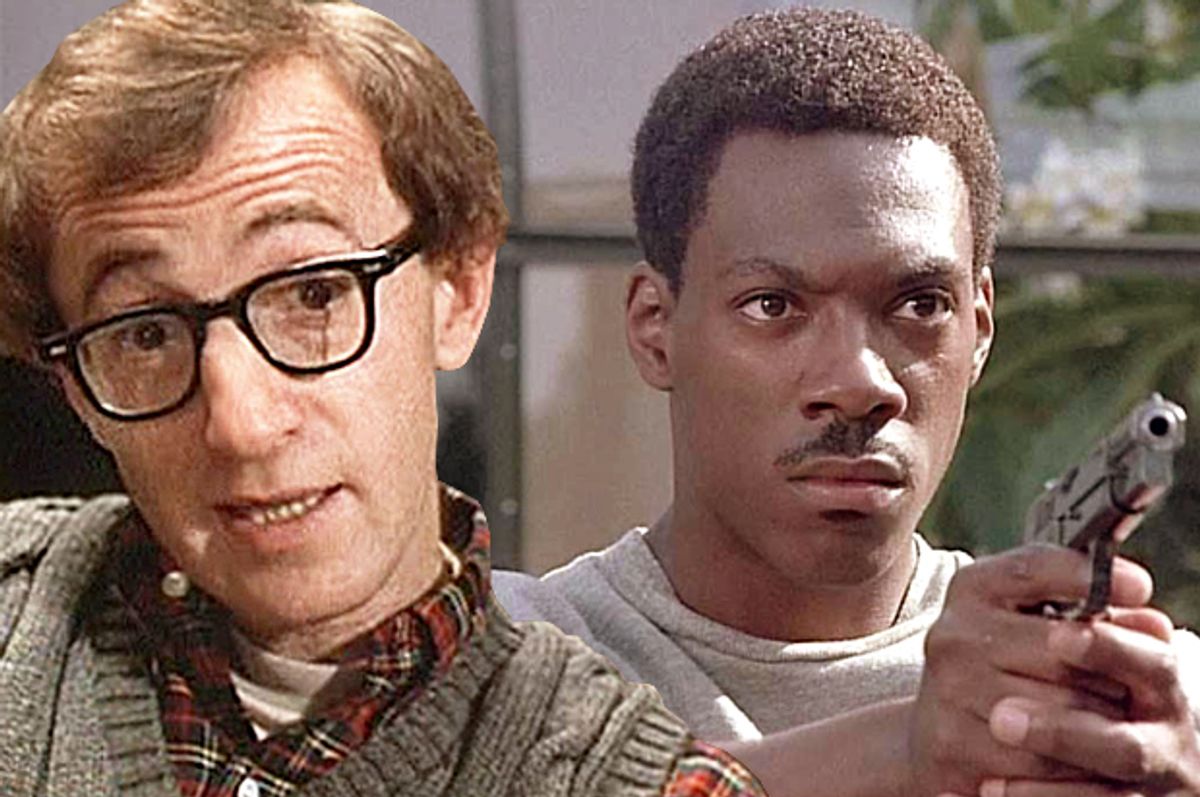 Last November, the Writers Guild Association (WGA) announced the list of its “101 Funniest Screenplays” of all time.  As a writer, I curiously scrolled through it.  And while I scrolled, I began to notice something – there was only one screenplay listed about the experiences of people of color – “Coming to America.” While the list included three films staring a black performer — “Coming to America,” “Trading Places,” “Beverly Hills Cop” — they all starred the same black performer. And the funniest film named — “Annie Hall” — is one that few people of color have even seen, let alone would hail as the funniest ever written.

“Friday.” “I’m Gonna Git You Sucka.” “Harlem Nights.” “Boomerang.” “House Party.” “Up in Smoke.” None of these films made the cut on a list that includes highbrow humor and slapstick comedies alike. But “Airplane!,” “Caddyshack” and “The Hangover” made the cut.

Yet, the WGA was not alone.

Just two months prior, the Hollywood Reporter (THR) unveiled its list of “Hollywood’s 100 Favorite TV Shows.”  THR’s list was about the same, listing only one show about the experience of people of color – “The Fresh Prince of Bel-Air” -- and three shows prominently featuring actors of color (“Scandal,” “The Wire” and “Orange Is the New Black”). Yet these shows were buried down a list where the show that reigns supreme is … “Friends.”

“Sanford & Son.” “Good Times.” “New York Undercover.” “Martin.” “Ugly Betty.” “227.” “Chappelle's Show.” “Roc.” “Resurrection Blvd.” “In Living Color.” “What’s Happening?” “The Jeffersons.” I failed to understand the logic of how none of these shows made the list.  And despite Bill Cosby’s current image, how could “The Cosby Show” not have been acknowledged in some way?

Not to be left out, the American Film Institute (AFI) proudly boasts its "100 Greatest American Movies of All Time" on its website.  While films like “Forrest Gump,” "Snow White & the Seven Dwarfs" and "The Third Man" (which is ironically a British film) make the cut, great American films like “The Color Purple,” “Do the Right Thing” and “A Soldier’s Story” somehow do not. “Guess Who’s Coming to Dinner” squeaked in at No. 99 … so there’s that.

All of these lists got me thinking: How is it that films and television shows starring/about people of color are so rarely recognized as being good enough?

The lack of Oscar diversity over the last two years highlights the quantity-quality dilemma for diverse talent. That in order to increase the number of recognitions received, their works have to be deemed deserving enough to warrant that increase.  So how can that be achieved in an industry with the quality standards represented above? Where, of 300 listed works, a mere six shows or films not solely about whites are deemed worthy enough to be considered among the best?

This reality demonstrates why, rather than focusing on the desired result —increasing the number of recognitions bestowed on diverse filmmakers — it may be more helpful to focus on the process of how filmmakers of color get such little recognition to begin with.

Hillary Clinton recently caused much debate when she said, “I don’t believe you change hearts…I believe you change laws.”  What she said may not be popular, but it does accurately depict the harsh reality of racism.  For example, if 75 percent of whites do not even know a single black person, and only 1 percent even have a black person in their lives that they would call a “close friend,” how likely is it that their hearts will be changed?

This highlights the challenge of empathy that works against people of color in the industry. People of color have long struggled to be recognized as being people. Because if others cannot empathize with you, they will not respect you, consider you or even simply see you.

Spike Lee eloquently addressed this in “Do the Right Thing” in a scene between his character, Mookie, and Mookie’s boss’s son Pino (John Tuturro):

It’s this mentality that allows black biopics, for example, into award show conversations. Actors of color are rarely celebrated, nor do black films realize “crossover” box office success, unless the films focus on pop culture figures or subservient/victimized characters — films about entertainers, athletes, maids and non-rebellious slaves.  In other words, films that are palatable to whites. Whites otherwise rarely watch character-driven films with, by or about black life. White people need a white conduit into each film.

It’s probable that “Training Day” would not have crossed over into awards territory if Denzel Washington’s co-star was not white. And it’s likely that “Monster’s Ball” would not have been widely regarded if its raw sex scene had been between two black actors rather than exploring the “taboo” of interracial sex. “The Blind Side” would likely never have been made if a black family had adopted Michael Oher rather than a white one, nor would “42” if it hadn’t also been turned into a story about Branch Rickey.

This Racial Empathy Gap is what black actors and filmmakers are up against every day. And it’s what Matt Damon failed to realize when he trumpeted that the "Project Greenlight" winner would be selected based on “merit.”

“Merit” is one of those words white people throw around when they feel there’s a possibility for some “unqualified” person of color to take away something from a “more deserving” white person. It’s a word never applied the other way around. So, the codified use of that word has resulted in a world where whites are given the benefit of the doubt that they’re more qualified, whereas people of color are burdened with having to prove they are good enough — to white judges. And even in the face of the grossly skewed outcomes that this system produces, most whites continue to proclaim their achievements are not, in part, the result of a skewed system, but solely the result of their individual hard work.

For example, of approximately 2,125 academy nominations (across all major categories, excluding best foreign film) over the last 25 years, about 3.4 percent have gone to black nominees, 4.7 percent to Asian nominees, 4.4 percent to Hispanic nominees and 0.1 percent to Native American nominees, compared to around 87.4 percent going to white nominees. For the roughly 425 that went on to win an Oscar, this meant the likelihood of a winner being black (4.7 percent), Asian (5.4 percent), Hispanic (7.0 percent) or Native American (0.0 percent) lagged far behind the 83 percent who were white. Any white nominee faces long odds for his/her work to be considered “the best” — but a nominee of color pretty much needs a miracle.

The giant empathy gap that people of color are up against is further complicated by taste and “merit,” standards that are set by whites.

Let's go back to “Project Greenlight” — 5,000 filmmakers uploaded their short films for the competition. The top 200 filmmakers are then chosen by their “peers” on Facebook. Now, if the black filmmakers have black casts in their films, what is the likelihood that their majority white peers will bother to even watch their films, let alone hold their films in the same regard as those made by other whites? Black filmmakers, unless they make films with white casts or provide a prominent white conduit, don’t stand a chance of making it into the top 12.

Further hammering home that “merit” is a farce, after the top 12 are selected, Damon voices his thought that a winner should be selected on “merit.”  And he actually says this -- with a straight face -- while he is in the middle of interviewing candidates to screen them for likability and sensibility. If it was just about “merit,” the winner would have been selected based on the strength of his/her short film, and nothing else. The fact that other subjective factors are considered exposes that the system is rigged.

Ridley Scott confirmed this when he responded to the backlash he received for whitewashing the cast of his biblical film “Exodus: Gods and Kings,” saying, “I can’t mount a film of this budget, where I have to rely on tax rebates in Spain, and say that my lead actor is Mohammad so-and-so from such-and-such.  I’m just not going to get it financed. So the question doesn’t even come up.”

There’s no way to know to what extent these mentalities and practices have cost qualified actors, writers and filmmakers of color not only jobs, but also opportunities to shine. However, that is ultimately of no consequence to Damon and Scott. They have their Oscar nods this year — making for eight total nominations between them.

This has long been the reality of the film industry. White actors, writers, directors and other film professionals often get a leg up on something else other than talent alone, and then vie against each other for awards based on “merit.”  This is why it’s a slap in the face when white academy voters emphatically proclaim that they “earned” their voting privilege, or when someone of Charlotte Rampling’s stature declares, “…maybe the black actors didn’t deserve to make it to the final [Oscar nominee] list.”

No one ever poses such suggestions about white nominees. They are given the benefit of the doubt that they do deserve to be on the list, that it is “their time” for an Oscar. No one ever questions the money and behind-closed-door gifts that drive the “For Your Consideration” campaigns spent to sway votes. Time and again whites benefit from, and are awarded for, factors other than “merit,” especially in an industry where relationships and access to money dictate what gets made. It’s time we call bullshit on this.

While no one is disputing how hard whites work when given the opportunity, those who think that “hard work” is what this is about are missing the point entirely. This is about artists of color not only not being afforded the opportunity to work hard, but also, in the few instances in which they are, being told that no matter how hard they work, that their work is rarely ever of the caliber of their white peers. That was the outrage over Ava DuVernay’s “Selma,” which was critically acclaimed, a box office success and nominated for more than 50 film awards — and yet still deemed “not good enough” for Oscar nominations for its director, actors or cinematographer. This was the equivalent of the academy telling black filmmakers that no matter what you do, it will take an act of God for you to be considered to be “good enough.”

All in all, race has kept many talented and deserving people from working and being recognized in the industry. And the industry can do something about it – by simply dismantling the system that white industry insiders have long been entitled to. Boycotting the Oscars telecast may not be the answer, but recognizing that the industry accepts, facilitates and rewards racism might be a good place to start.