No, Bernie Sanders' moment isn't over: Why his gargantuan impact can't be erased by a Super Tuesday drubbing

While polling shows Sanders bracing for what could be critical losses tonight, his movement will live on regardless 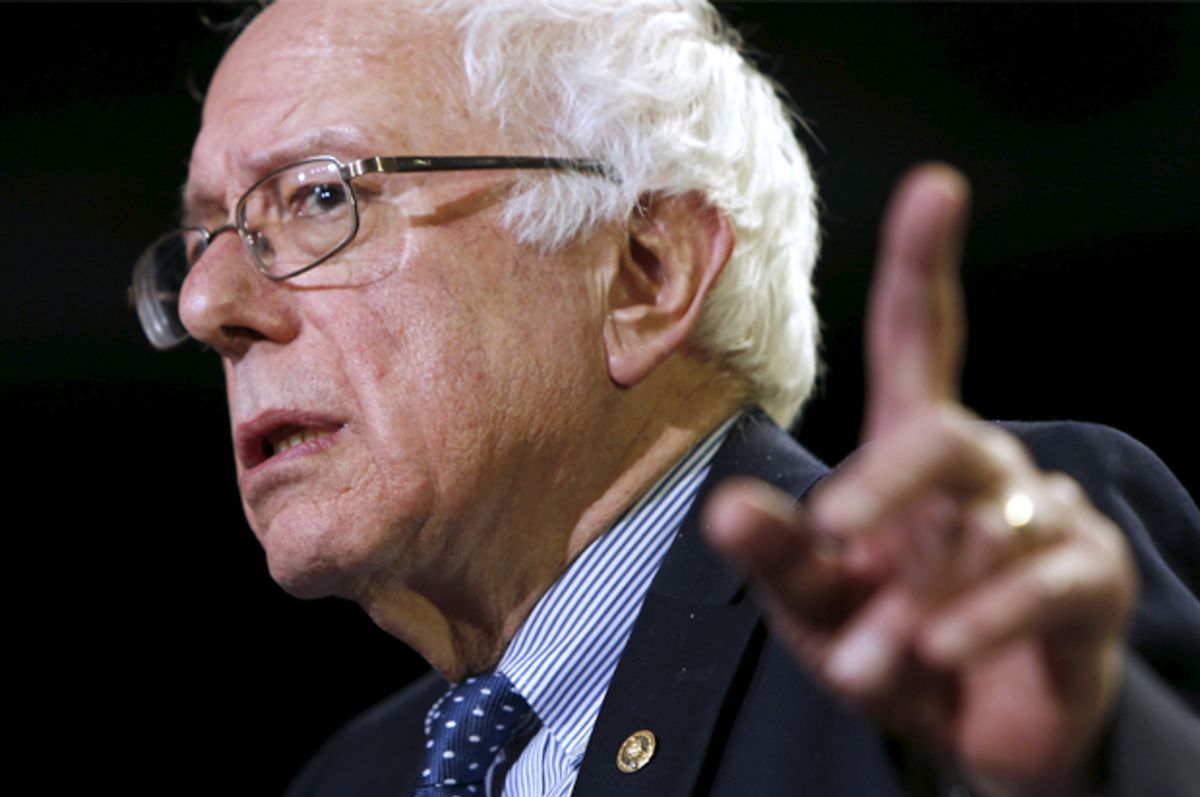 For most of the past year, the traditional media has waged a determined campaign to pretend the Democratic presidential primary doesn’t exist. (The DNC certainly did its best to help with that effort.) Bernie Sanders upended that studied neglect by raising more money that any presidential hopeful and battling presumptive favorite Hillary Clinton to a draw in early states.

Now Clinton’s blowout in South Carolina, and the expectations of more lopsided victories throughout the South on Super Tuesday (and perhaps even in expected Sanders strongholds in the North), has led media types to exhale, secure in the knowledge that Clinton will storm to victory, so they can turn their attentions to the Donald Trump auto wreck for a while longer.

They should resist that temptation, because as interesting as the slow-motion detonation of the Republican Party has been, Democrats are engaging in their own self-reckoning that will prove just as seismic in the future. Sanders’ biggest accomplishment, if it holds, will come in getting Democrats to dream again.

Consider where we began this election cycle. Hillary Clinton’s campaign was “by far the most dominant for a non-incumbent president since nominations began to be determined by caucuses and primaries in 1972,” intoned Nate Silver last April. She enjoyed the support of practically every elected Democrat in America, with an unprecedented polling lead for the modern era. Liberal pundits and lawmakers openly worried that Clinton’s primary would be seen as too easy, a coronation foisted upon voters.

Meanwhile, Sanders was the 2016 candidate most likely to have inspired the response “Who?” prior to his campaign announcement. The progressive left spent most of 2015 – even several months while Sanders was an active candidate – trying to pull Elizabeth Warren off the sidelines. There was a vague hunger for someone to pressure Clinton from the left, while speaking to economic anxieties and the agglomeration of power by a select few corporate institutions. But at the outset, nobody saw that potential in Sanders, an older white male from a small, homogenous state at a time of explosive diversity within the Democratic coalition.

From scratch, Sanders built a fundraising machine that is now the envy of Democratic politics. State by state, Sanders knocked down 60-point leads, and was unthinkably competitive before running into the Clinton firewall in South Carolina. He tapped into a wave of support, particularly from young people frustrated by the burdens of weak economic opportunity and student debt. And by ignoring the typically narrow allowable range of Democratic policies, he shifted the conversation to the left, where Clinton had to follow.

That conversation will prove difficult to stuff back into a bottle. The worst moment politically for Clinton in this primary was when she mounted a strategy of trying to snuff out the hope Sanders’ policies afforded. Single payer healthcare “will never, ever come to pass,” Clinton warned. Aiming for the horizon instead of 3 inches in front of you makes no sense, she counseled. A Democratic rank and file battered by globalization and stagnant wages, horrified at the failure of core institutions and worried about their future, should be happy with incrementalist solutions, the argument suggested.

Clinton has noticeably turned away from this, emphasizing those areas where she is unafraid to call for big change, particularly in racial and social justice. That has corresponded to a rise in the polls. Liberals want a little inspiration this year, and they want to know what their candidates stand for.

Consider the mini-debate among economists over UMass-Amherst professor Gerald Friedman’s forecasts of Sanders’ proposals, and the idea that they would super-charge growth. When you strip away the accusations of bad faith and the complex numbers, the Friedman affair really came down to whether you think America deserves a better recovery than the one it got from the Great Recession. We never got back to the pre-recession growth trend, and we saw more of the meager gains benefit the top 1 percent.

The goal of public policy ought to be figuring out if it’s possible to regain the economy’s lost potential and make America whole again (a line recently picked up, incidentally, by Hillary Clinton). By the end of the debate, even Paul Krugman, ringleader of the witch hunt against Friedman, was back to endorsing a big spending plan, to capitalize on record-low interest rates and reverse the unimaginable trend of historic lows in U.S. public investment.

It took someone with an unwillingness to think small, like Sanders, to replace “this is the best we can do for now” with “this is what we should be doing.” The truth is, as Rick Perlstein explained brilliantly recently, you never know when big ideas will get thrust into service. The leading book in Washington in 1963, Perlstein notes, was "The Deadlock of Democracy," which asserted that gridlock and gerrymandering and partisanship made progress impossible. Within two years Lyndon Johnson signed Medicare, the Civil Rights Act, the Voting Rights Act and dozens of other pieces of the Great Society program.

Political parties, outside of the heat of the moment, need to build a shelf for the ideas they believe will most benefit the country, and keep filling that shelf constantly, regardless of the near-term political circumstances. In 2007, most lawmakers had no indication that within a year they’d be working on legislation to bail out banks, which they could leverage into policies to rebalance our economy away from Wall Street. They missed that opportunity. Sanders represents a moment to regain it.

But as Perlstein also points out, Sanders cannot do it alone. The contested primary proves the concept that a large share of Democrats want free public higher education and universal healthcare and paid family leave and an end to the Wall Street-centered economy. The tremendous support among millennials, who appear to be quite left-wing, suggests that coalition can expand. But it will wither unless a political infrastructure builds around those ideas, keeping them alive and preparing for the right moment to unleash them.

That begins with finding members of Congress, state legislators and people at all levels of politics willing to carry that flag for Sanders-style leftism. It means embracing a vision for the direction of the country, even if it’s not achievable right away. History teaches us that political movements come in waves; even if the first falls short, the next may reach its goal. The only way to stop this dynamic is to disengage, to make sure the next wave disappears. The millions supporting Sanders should be pleased with their impact on the party, even if they don’t succeed. But what matters now is whether they put in the formidable work ahead.