Blaming Democrats for the KKK: Van Jones fights back against Trump's racist support, but he can't win 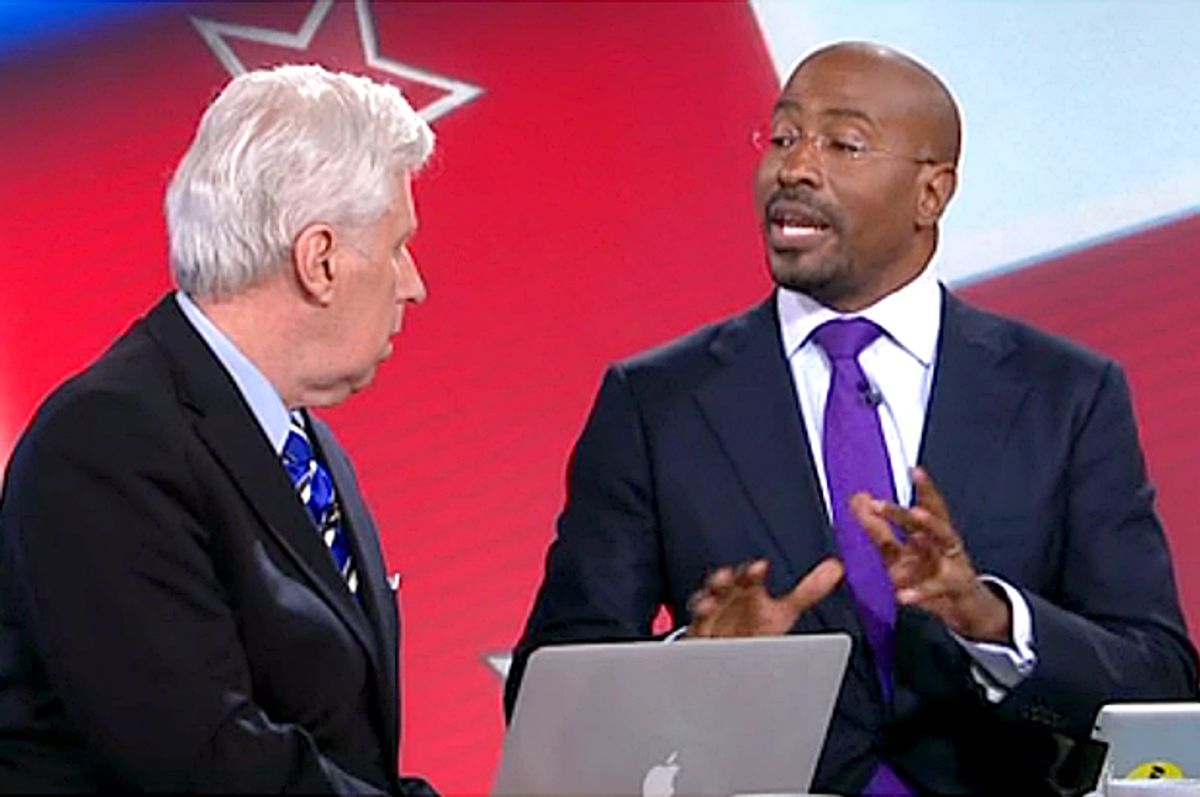 It’s an obnoxious case of whitesplaining. It’s in incredibly patronizing case of a white person lecturing a black man about the roots of racism. It’s shallow in its sense of history. There are all kinds of reasons to be appalled by the lecturing Trump supporter Jeffrey Lord gave to former Obama advisor Van Jones Tuesday night.

But while most liberals – and liberal media outlets -- took last night’s dustup on CNN as a slam-dunk for their side, this could actually be good for Trump and his crowd.

It’s not that Lord was right, but that he tapped into one of the Democrat’s weaknesses: The GOP has used the idea that Democrats are the real racists -- remember Herman Cain? -- and it's started to sink in. The right has also employed rhetoric about wanting to be being “colorblind” for a long time, and at this point, enough people believe it’s easily attainable that much of the country will come away from this dust-up thinking that Lord won the fight. Media outlets that think this was a win for anti-racism should watch how it unfolds over the next days and weeks. Breitbart posted it just like the lefty sites did.

Lord also came back connecting the Klan to the old Democratic party, which would be a legitimate point if they were having this debate 60 year ago. The current Democratic party has all kinds of flaws, but supporting violent racist groups is not among them.

But Lord is canny, even if he’s misleading and wrong. When Jones talked about how he tries to keep his seven-year-old son away from the “vitriol” that the contemporary GOP trades in, Lord responded with this:

Using the Kennedys here is a bit disingenuous, since their efforts on race were very different from what we’d see in a Trump presidency.

This line of reasoning sounds so transparently wrong that Lord would have had to sulk away by the end of the exchange. Or so a lot of left-of-center viewers thought. But despite triumphant liberal headlines, the debate was not over Wednesday morning. On “The Next Day,” the two got into it again. Jones made good points, as ever. But Lord also hit back:

This is insane. But it’s also the kind of thing that will land well with a lot of white conservatives who don’t see themselves as racists. It will persuade people with a shallow understanding of the issue to think that Lord is right.

Jones has argued this various ways various ways, and it bears repeating as obvious as it is: Race wasn’t something liberals or progressives or black activists made up. Black people were brought forcibly to the Americas to work for white people. This happened long before either the Democratic or Republican party, even before the country was officially founded. Slavery, segregation, Jim Crow, and other racist developments did not come from liberal or progressive impulses.

As for being colorblind, or simply assessing each other based on “the contents of our characters”: Wouldn’t it be nice to think so? Someday we may be there. But we’re not there yet.

And as sharp as Jones was last night and this morning, he may be outmatched by the mainstream’s sense that racism was something that happened a long time ago. If you see things that way, then Van Jones is just bringing back bad memories. Unless you see racism as something with a legacy, something that accrues over time when it’s ignored, then Jeffrey Lord won this fight.