Thanks, America! Our broken political system is about to give us a terrifying campaign between a vapid huckster and a war hawk

Two corrupt parties and an angry, fearful and ignorant electorate are about to create the worst election ever 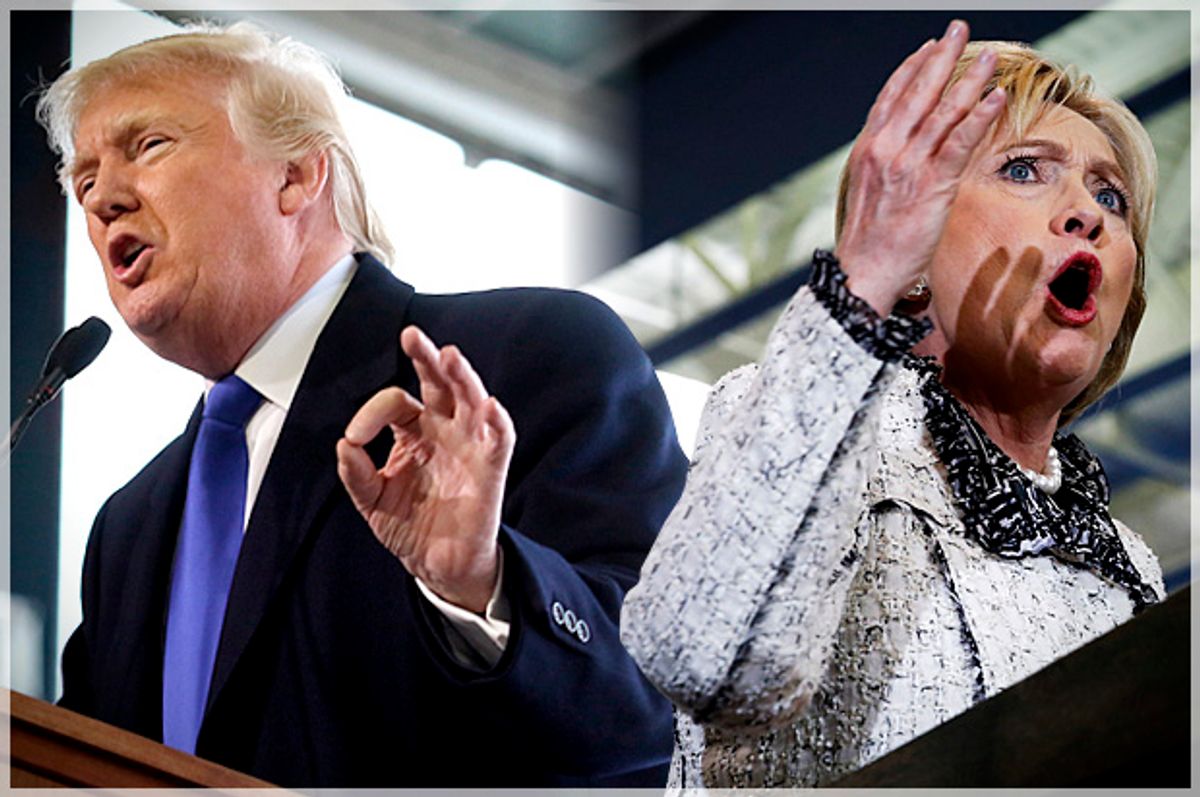 Happy Super Tuesday: By the time you read this votes will already have been cast in 11 states (and American Samoa!) that in all likelihood will doom us to an eight-month campaign between a vacuous, proto-fascist huckster with no accomplishments or principles and an unregenerate war hawk who represents the neoliberal global elite. Thanks, America!

Thanks for not really paying attention and for misunderstanding pretty much everything and for voting out of fear and incoherent emotion, and for permitting and enabling an engineered, anti-democratic political system. OK, it’s true that the two parties brought this on themselves because they are corrupt and shortsighted and at least one of them is evil. If we’ve learned anything from the 2016 campaign so far, we have learned that a lot of people understand that. One could view that as an encouraging sign, even if the general response has not been entirely rational or constructive. In all honesty, I can sympathize: What have rational or constructive done for us lately?

Anyway, that broken system is about to inflict upon all of us a summer and fall of unlimited terror and unfunny farce, in which all non-nihilistic and approximately sane people will feel compelled to do everything possible to support the unregenerate war hawk over the freak-show barker. It’s a bad Hollywood remake of the disastrous French presidential election of 2002, when the electoral left imploded so thoroughly that center-right President Jacques Chirac’s last remaining opponent was the neo-fascist ultra-nationalist Jean-Marie Le Pen (whose subtler and shrewder daughter, Marine Le Pen, has since inherited his mantle). That was pretty dreadful, but let’s say this for the French: People who basically hated Chirac’s guts showed up to pull the lever for him in droves, and he wound up with 82 percent of the vote. Anyone want to bet on a similar outcome in Stupidland?

I recognize how maddening it is to skip over the whole part of the primary campaign where actual citizens get to vote in large numbers. But who ever said that was the point? Both major parties engineered their primary processes to avoid a drawn-out ideological battle and create a near-certain nominee by the middle of March, and in both cases the law of unintended consequences has come into play. That brilliant plan has blown up in the faces of the Republican Party leadership, to hilarious effect, although the time for laughter is pretty nearly over. On the Democratic side it is about to work to perfection and yield the long-expected outcome, but even Hillary Clinton supporters may find the aftertaste unpleasant.

I will leave it to others to play out the game-theory scenarios in which non-Clinton or non-Trump candidates might still emerge victorious. Bernie Sanders’ campaign was always an extreme long shot, for reasons I hardly need to enumerate here. The most astonishing thing about Sanders in 2016 is that he has gotten as far as he did, which of course also speaks to the multiple weaknesses of his opponent, most notably the fact that most people don’t like her. His narrow pathway to the Democratic nomination probably involved winning the Nevada caucus and holding Hillary Clinton to a narrow victory in South Carolina. If he can win three or four non-Vermont states on Tuesday — from a group that includes Colorado, Massachusetts, Minnesota and Oklahoma — he can plausibly keep going a bit longer. One would imagine that strategic wizard Tad Devine’s thinking all along has been that if Sanders can survive March without falling too far behind, the primary calendar shifts back toward friendlier terrain in the Northeast and on the West Coast. That’s an awful lot of “ifs.”

On the Republican side, any alternate-universe hypothesis involves either Ted Cruz or Marco Rubio dropping out in the next week or two and endorsing the other one, in spite of their obvious and unfeigned mutual hatred. Then the Crubio survivor hounds Donald Trump all the way to the convention and engineers a last-minute delegate-count coup with Koch millions and backroom deals. Even if that works, how do you suppose that scenario would play out among the disgruntled Trumpian masses?

All that stuff, I suspect, is whistling past the graveyard. In today’s installment of Alarming Twists in Conventional Wisdom, the New York Times has already leapt past the presumed results of Super Tuesday to insider-baseball reporting on the impending general-election race between Hillary Clinton and Donald Trump. I won’t pretend that I didn’t read that article eagerly, in search of evidence that the Clinton team recognizes that this is a volatile and unpredictable situation and that they’re in a whole heap of trouble. Maybe it’s reassuring, if that word is not ludicrous in these circumstances, to learn that both Bill and Hillary Clinton expect a tight race, and understand that normal bipartisan assumptions about the electoral map don’t apply when your opponent is a giant orange robot from the planet Zanthor, who feeds on the hatred of his enemies.

It’s no good claiming that we don’t deserve this painful Hobson’s choice, because we do. As Salon’s Sean Illing observed recently, the rise of Donald Trump represents the widespread stupidity, ignorance and arrogance of this country all too perfectly. A nation built on bullshit and empty bluster deserves a bullshitter-in-chief, a megalomaniacal billionaire with a long record of business failures, bankruptcies and empty promises whose only proven expertise is not in deal-making but in branding.

Say what you like about the guy: He represents the moment when electoral politics became pro wrestling; he’s the political equivalent of one of those hyper-patriotic Screaming Eagle rear-window decals in an F150 pickup, all attitude and no substance; he’s the world of Mike Judge’s “Idiocracy” made real. It’s all true, and it doesn’t matter. Those are exactly the things people like about him. Furthermore, the true extent of Trump’s appeal across normal political, demographic and geographical boundaries has yet to be measured, and is about to create many sleepless nights for Democratic Party apparatchiks who thought they understood how to win elections.

I won’t even pretend to adopt the cynical position that there is no difference between Trump and Clinton. When I heard Sen. Ben Sasse, a right-wing Republican from Nebraska, announce this week that he wouldn’t vote for either of them, it occurred to me that that might be the only time Sasse and I ever agree about anything. That thought was infantile and petulant and I hereby retract it, but it also speaks to a deeper truth about American politics that is not unrelated to our current predicament. Sasse and I both live in states where our presidential vote is virtually certain not to matter, so we might as well not bother.

There are innumerable differences between Clinton and Trump, and I recognize that many people who support Clinton do so for what they see as valid political and strategic reasons, including (but not limited to) the fact that her presidency would break a historic barrier for American women. Most of those reasons boil down to the fact that she isn’t an evil robot from Zanthor but is a recognizable human politician. For those of you with long memories, she is pretty much Henry “Scoop” Jackson, a right-wing Democrat from Washington state who was affectionately dubbed “the senator from Boeing” for his love of military hardware and his Cold War hawkishness. Or she’s Richard Nixon without the progressive social policies—and if that sounds like an outrageous gag line, it’s really not.

Let’s get back to the question of what we deserve, and what we’ll get. A blundering imperial power so narcissistic that it uses overseas military interventions as Viagra for its flaccid masculine ego, and that rains death on people in villages a world away for reasons it does not understand, quite likely deserves a first female president who lists nonagenarian war criminal Henry Kissinger among her closest friends and who has supported every misbegotten foreign-policy misadventure of the last 30 years. In allowing our politics to become so ruinous, we clearly deserve this killing joke of an election campaign where we must elect said widely disliked and distrusted first female president in order to fend off the reanimated corpse of Mussolini. But don’t feel too confident that this remake of that ugly French film from ’02 isn’t heading toward a shock ending.