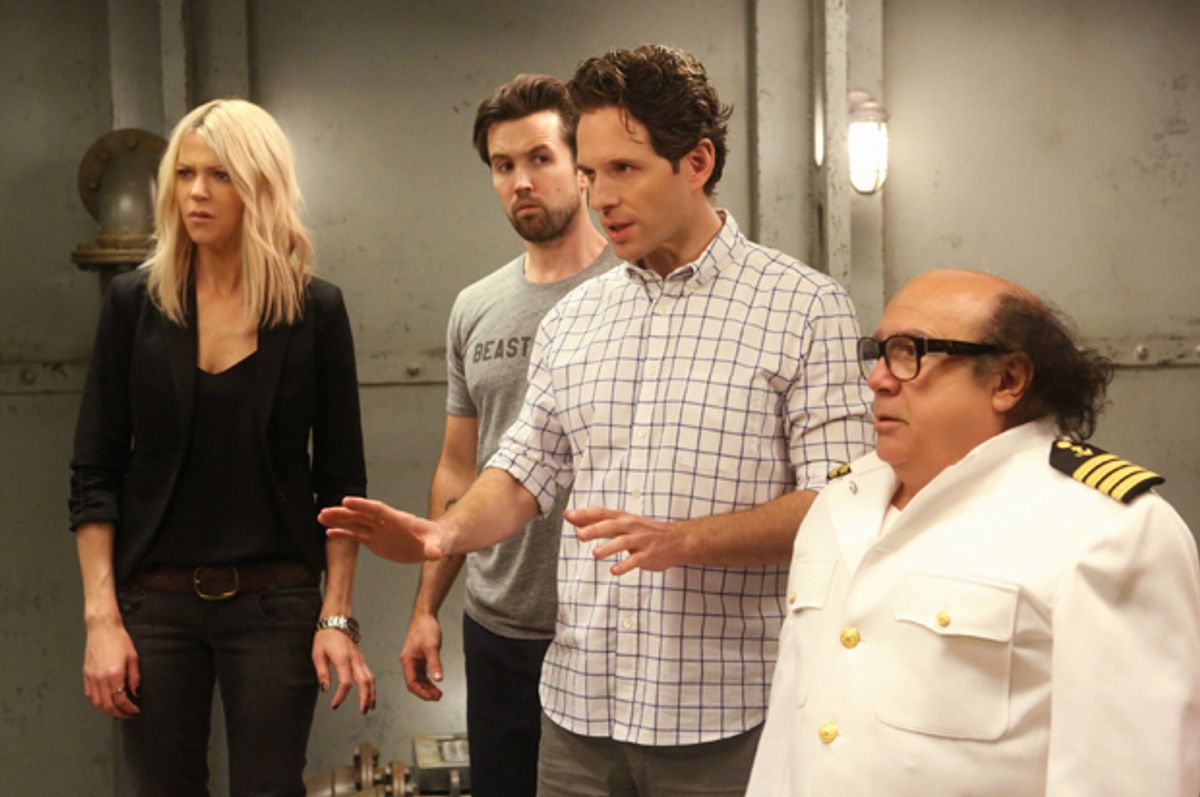 If we live in the golden age of television, the FXX comedy “It’s Always Sunny in Philadelphia” is one of the underappreciated gems. Often billed as “Seinfeld on crack,” the show has a distinct comic sensibility of its own, cynically reveling in the monstrosities of its five main characters, who have been described in-series as “the most horrible people alive.” Although it’s one of the longest running live-action comedies in history (its first season aired in 2005), “It’s Always Sunny” hasn’t received much critical recognition or won any awards (which the show itself has pointedly referenced). It also hasn’t lost any of its edge, mining dark comedy out of a twisted mythology that it has had more than a decade to develop.

It has also, incidentally, produced some truly memorable social commentary. That was especially evidenced in last week’s episode “The Gang Goes to Hell,” the first half in a two-part season finale that feels like a series closer (the show has been renewed through next season, though). Not only did it heavily suggest that the main characters have died and are now in the afterlife – which, for obvious reasons, will be a game-changer for the show if it proves true when the second part airs on Wednesday – but in the process it tackled sensitive issues like homophobia, rape culture and religious morality (spoilers follow).

The episode opens with the title card telling us that the gang is standing in an Unknown Location. They stand before an unseen judge against a white background wearing white robes while they try to talk themselves out of being damned for eternity … literally. We hear something about a cruise ship sinking (a plot thread that will presumably be picked up in Part 2), but Mac (Rob McElhenney) assures their captor that they are good people before the title credits roll and we cut to them on board the mysterious ocean vessel. Apparently Mac won free cruise tickets at a church raffle (which we never see), and the gang members will get to vacation in Suite H666 in an environment that seems specifically designed to test their moral vices. Dennis (Glenn Howerton) is lust, Dee (Kaitlin Olson) is wrath, and Frank and Charlie (Danny DeVito and Charlie Day) are gluttony. Mac remains intriguingly undesignated (more on that in a moment).

Dennis’ subplot in this series is that rare thing in American comedy – an effective joke on rape culture. The premise is that Dennis, who has severe delusions of grandeur when it comes to his prowess with women, harbors a fantasy in which he physically isolates a woman on a boat in the middle of the ocean, coercing her into sleeping with him because of “the implication.” This joke is never told in a way that is crass or exploitative, and the punch line is never at the expense of the women. The joke is that, although Dennis gets off on his perceived power over the women in those scenarios, he loses power because other people see him as a transparent creep. “'Cause if the girl said ‘no,’ then the answer obviously is ‘no,’” he unconvincingly reassures Mac in an earlier episode (“The Gang Buys a Boat”) with this theme. “But the thing is, is she's not gonna say ‘no.’ She would never say ‘no,’ because of the implication.”

In “The Gang Goes to Hell,” Dennis finally gets to live out his fantasy, stalking a barely legal woman who he insists is tempting him, even though her behavior is completely innocuous. He confronts her, she politely allows him to make his coercive pitch, and then immediately gets him thrown into the boat’s jail. There is nothing cool or erotic about Dennis’ fantasy, as he has always envisioned it, and instead of being in control of the power dynamic, Dennis unexpectedly found that a greater moral force was presiding over affairs, one that would pluck him out of a scenario in which he was about to harm another person. Instead of indulging in its fantasies, it just throws him in the brig. Dennis, and by extension the misogynistic mentality he embodies, is oblivious to its own ominousness… but that doesn’t make it any less sinister. Rape is taken seriously in this universe, as shown when a bird literally defecates in Dee’s mouth when she brags to Dennis about psychologically coercing them into sleeping with her with “an insinuation” of what will happen if they don’t.

Perhaps the most interesting character in the episode is Mac. As the series progressed, a running gag emerged about the devoutly Catholic and virulently prejudiced Mac being a closeted homosexual. Unlike shows where the joke is at the expense of his homosexuality, though, “It’s Always Sunny” has made it clear that the punch line is Mac’s pointless sense of guilt. For example, in the episode “Mac Day,” when Mac meets a cousin who is in every way a cooler version of himself, the superior version of Mac is completely comfortable in his homosexuality, in contrast to the regular Mac’s deep denial and overcompensating. The humor stems from just how far Mac is willing to go to deny his homosexuality, in the process implicitly arguing that the intolerant behavior we see from people like Mac in real life is often just so much self-hatred externalized. In this episode, all of those threads are built to a climax in which Mac – having found a religion that truly fulfills him spiritually, only to discover that it accepts homosexuality –finally admits that he is, in fact, gay. This isn’t the payoff, though, but the setup: Since he is gay, he now no longer believes in God.

Interestingly, though, there are hints that there might be some sort of god in the “It’s Always Sunny” universe. Whenever Mac makes intolerant comments about homosexuals, a loud thunderclap goes off to suggest a divine being’s displeasure. This is a proactively progressive view on religious morality: There is a place for God in our universe, and for the metaphysical in general, but it doesn’t cast out homosexuals or objectify women. (Dennis, for what it’s worth, seems to be agnostic, but then again there are plenty of professional atheists with well-known sexist streaks.) As a result, when “It’s Always Sunny in Philadelphia” creates humor on subjects like sexism or homophobia, it doesn’t do so by ridiculing the victims, but by deflating the delusions that fuel prejudices. Dennis thinks he’s cool because of how he treats women and Mac thinks he’s righteous because of how he scorns homosexuals; in fact, those traits merely make them creepy and lame, respectively.

There is a case to be made that, while not all of the series’ best episodes take place on boats, any episode on a boat is going to be one of the best (see “The Gang Buys a Boat” or “The Gang Misses the Boat”).  Here the boat could very well be a ferry across the river Styx, transporting them to the next realm; or, just as likely, a clever gimmick that will pay off in an unexpected and memorable punch line that allows the series to hit the reset button at the start of Season 12. All I know is that, if “The Gang Goes to Hell: Part Two” lives up to the promise of last week’s episode, the story arc could stand on its own as an example of satire done right.

It's Always Sunny In Philadelphia Tv