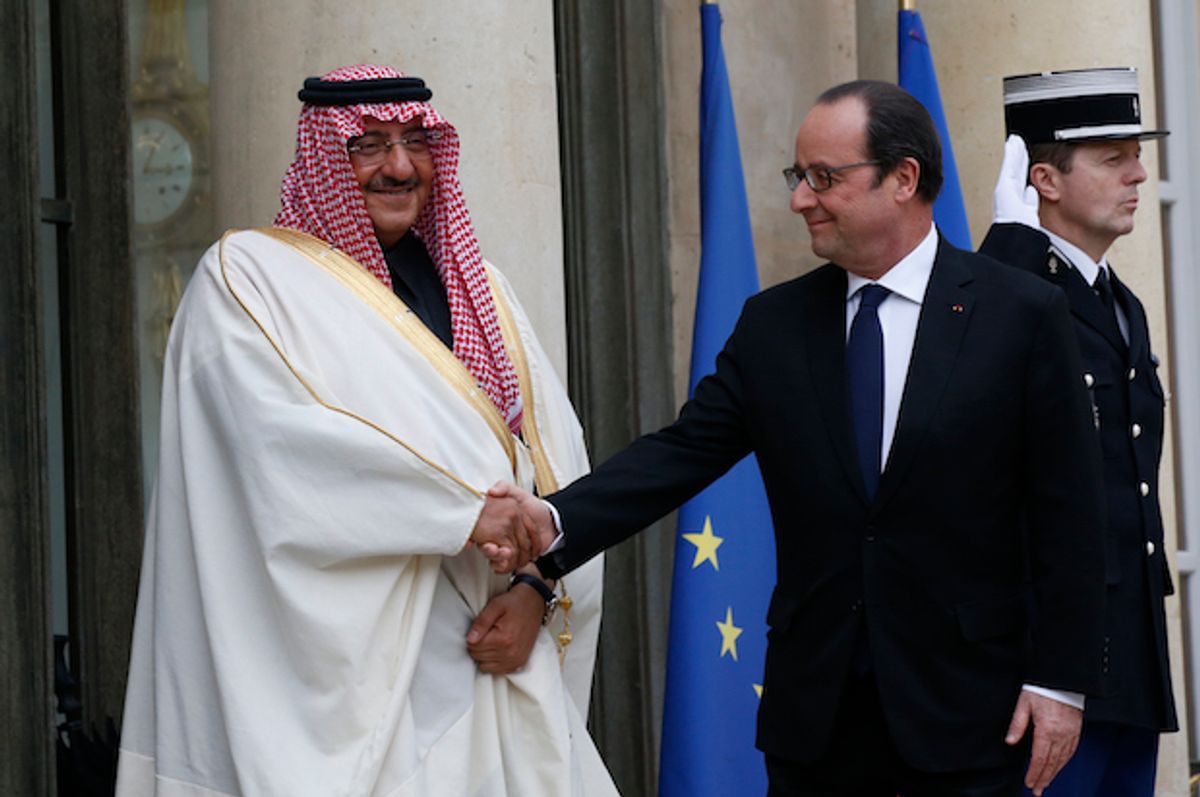 Prince Mohammed bin Nayef received France's Legion of Honor "for his great efforts in the region and the world in countering extremism and fighting terrorism," the Saudi Press Agency revealed on March 6, two days after he and Hollande met at Élysée Palace.

This is fascinating, considering the E.U. has quietly admitted that Saudi Arabia is one of the world's leading sponsors of Islamic extremism.

"Saudi Arabia has been a major source of financing to rebel and terrorist organisations since the 1970s," writes the European Parliament in a 2013 report, adding, "countries like Saudi Arabia, Qatar, United Arab Emirates and Kuwait do too little to stop rich and conservative donors from financing terrorist organisations through charitable and religious institutions."

"The United States is well aware about the financing network starting from Arab countries and reaching terrorists organisations through charitable institutions," the European Parliament report points out, drawing attention to similar statements made in secret by the U.S. government.

"Saudi Arabia remains a critical financial support base for al-Qa'ida, the Taliban, LeT, and other terrorist groups," reveals the U.S. government cable, which we only have thanks to whistle-blowing journalism organization WikiLeaks. (LeT refers to Lashkar-e-Taiba, an extremist group based in South Asia that has its origins in U.S. support for Islamic extremists in Afghanistan in their war against the Soviet Union in the 1980s.)

"It has been an ongoing challenge to persuade Saudi officials to treat terrorist financing emanating from Saudi Arabia as a strategic priority," the State Department adds.

Once again, then, it is quite strange that the leader of France — a country with the long and proud secular tradition of Laïcité — is bestowing its highest honor upon one of the leaders of a tyrannical theocratic regime that has been described as the "fountainhead of Islamist terrorism."

Because it is not just donors in Saudi Arabia that fund extremist groups; the Saudi regime itself has spent more than $100 billion in the past three decades exporting its fundamentalist form of Sunni Islam known as Wahhabism throughout the world, funding schools, mosques and charities in poor Muslim-majority countries.

What could possibly be behind such an action? Why would the secular republic of France grant its highest honor to the crown prince of a Wahhabi regime that bases its laws on an extreme interpretation of Sharia (i.e., Islamic law), refuses to give basic rights to women and beheads people for peacefully protesting or selling drugs?

The AP gives us a hint in its report: "Saudi Arabia is a French ally in the Syria conflict and a major client of French armaments."

Radio France Internationale noted that the two countries' "economic and political ties have been strengthening in the fields of aerospace and military contracts" in an announcement in October that France and Saudi Arabia had signed 10 billion Euro worth of contracts.

The Saudi regime bought another $3 billion of weapons from France in a November 2014 deal. "French-Saudi ties have improved sharply amid Syria crisis," Reuters noted.

France has joined the Saudi monarchy, along with the U.S., in funding rebels to overthrow the regime of Bashar al-Assad in Syria. Western allies Saudi Arabia, Qatar and Turkey have supported extremist groups in the disastrous five-year war, including al-Qaida affiliate Jabhat al-Nusra.

The fact that Saudi Arabia sits on the second-largest oil reserve in the world, and is the most powerful regime in the Gulf, the most oil-dense region of the planet, doubtless has something to do with it, too.

That the French government felt the need to "quietly" give the award to the Saudi crown prince may be construed as a subtle acknowledgement of the hypocrisy.

Satirist and musician Tom Lehrer once quipped that "Political satire became obsolete when Henry Kissinger was awarded the Nobel peace prize." Former Secretary of State Kissinger — although still publicly lauded by prominent figures like presidential candidate Hillary Clinton — is an accused war criminal, and oversaw policies that, according to prominent historian Greg Grandin, led to the deaths of no less than 4 million civilians.

Likewise, one might again declare the demise of political satire when the ostensibly left-wing leader of secular France bestows his country's highest honor upon the crown prince of a brutal regime that supports extremist Islamist groups and exports Wahhabi fundamentalism throughout the world.