The sisters declare their forgiveness -- and by the way, watch their reality show! 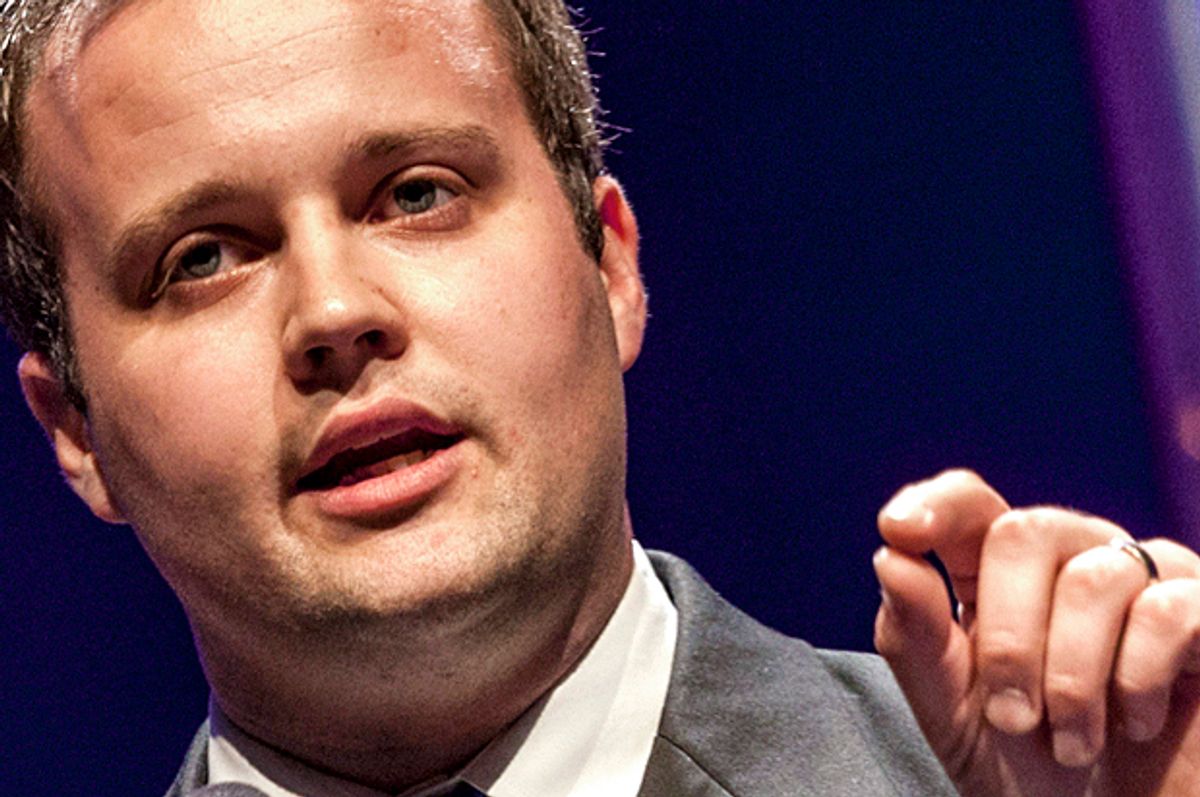 If Josh Duggar wants to make a go of rebuilding his life, may he go forth and do no further harm. If his sisters have forgiven him and his wife is working toward reconciliation, may they all find healing. But can the Duggars do America a favor and keep the rest of us out of it from here on in?

Earlier this week, in a message on the Duggar family site ominously titled "Statement JD1234," the Duggars announced that "Josh has completed his residential rehabilitation program." The eldest of the assertively reproductive Duggar family has been in and out of news over the past year. First there were the revelations of "wrongdoing" and acting "inexcusably" as a teenager — a variety of incidents involving forcibly touching multiple young girls, including two of his own sisters. In an interview with Megyn Kelly last June, Jessa Duggar Seewald downplayed what had happened, saying, "He made some bad choices, but really the extent of it was mild inappropriate touching on fully clothed victims. Most of it while girls were sleeping."

In July, Bill Gothard, the former head of the Institute in Basic Life Principles, detailed how, several years earlier, the Duggar parents had sent young Josh to their training center in Little Rock and how he had been "cleansed" of his issues. "The incident happened 12 years ago and since then Joshua has lived an honorable life," Gothard explained. "That speaks for itself, he certainly learnt his lesson and now he will have a whole new respect for young ladies." That Institute, by the way, has been accused by former members of "sexual abuse, harassment and cover-up." In August, Duggar ladies Michelle, Jana, and Jinger were nonetheless guest speakers at an IBLP Mother/Daughter Conference in Indianapolis. And that same month, a hack of Ashley Madison — a service for married people looking for partners to have affairs with — revealed the name of the "honorable" Josh Duggar among its clientele. Duggar, who had at the time been executive director position at the conservative Family Research Council, soon admitted an "addiction" to pornography and that "I have been been the biggest hypocrite ever." Josh then swiftly dropped off the radar, amid reports he was entering a long term rehab facility to begin the "long journey toward wholeness and recovery."

In January, Josh Duggar's wife Anna issued a statement that "2015 was the most difficult year of my life," and revealed, "Just recently I visited Josh. It was an important step on a long difficult road. I want to thank all of you for your prayers and your messages of hope." And now, in announcing her brother's release back out into the wild, Jessa Seewald tells People, "exclusively," that "I definitely have forgiven Josh. It is a process, though, that you have to work through in your heart. And trust is not quickly rebuilt. It is something that takes a while. We love him very much, though, and we are very hopeful for the future." People goes on to add, "The family's new show 'Counting On' premieres Tuesday at 9 p.m. ET on TLC." Well, what a coincidence!

What a wonderful time to embrace forgiveness and trust and love and hope — right when you've got a new reality show to promote. (TLC aired three "Counting On" specials in late 2015.) The network is quick to say that "Josh is not appearing in 'Jill & Jessa: Counting On'" and add, "We wish the family continued healing," but you've got to give TLC credit for wringing as much out of that expansive, dysfunctional family as humanly possible. Because while Josh may not be on the show, his shadow certainly looms large. A promo for the show features the teary acknowledgment that "2015 was a very difficult year," and describes the clan as "Healing from the past. Hopeful for the future" while Megan Nicole's "Courageous" inspirationally swells. The Duggar family says that Josh, meanwhile, will "continue professional counseling and focus on rebuilding relationships with his family."

I'm sure 2015 was indeed a difficult year, especially for the women of the Duggar clan. Yet they still somehow manage to grab headlines for their Kate Middleton like hair and "glam and gorgeous" looks. They are TV stars. And they are, increasingly, TV stars whose job description includes being related to someone who did a lot of damage to a lot of people's lives. But hey, as the tagline of their show explains, "Family is everything."