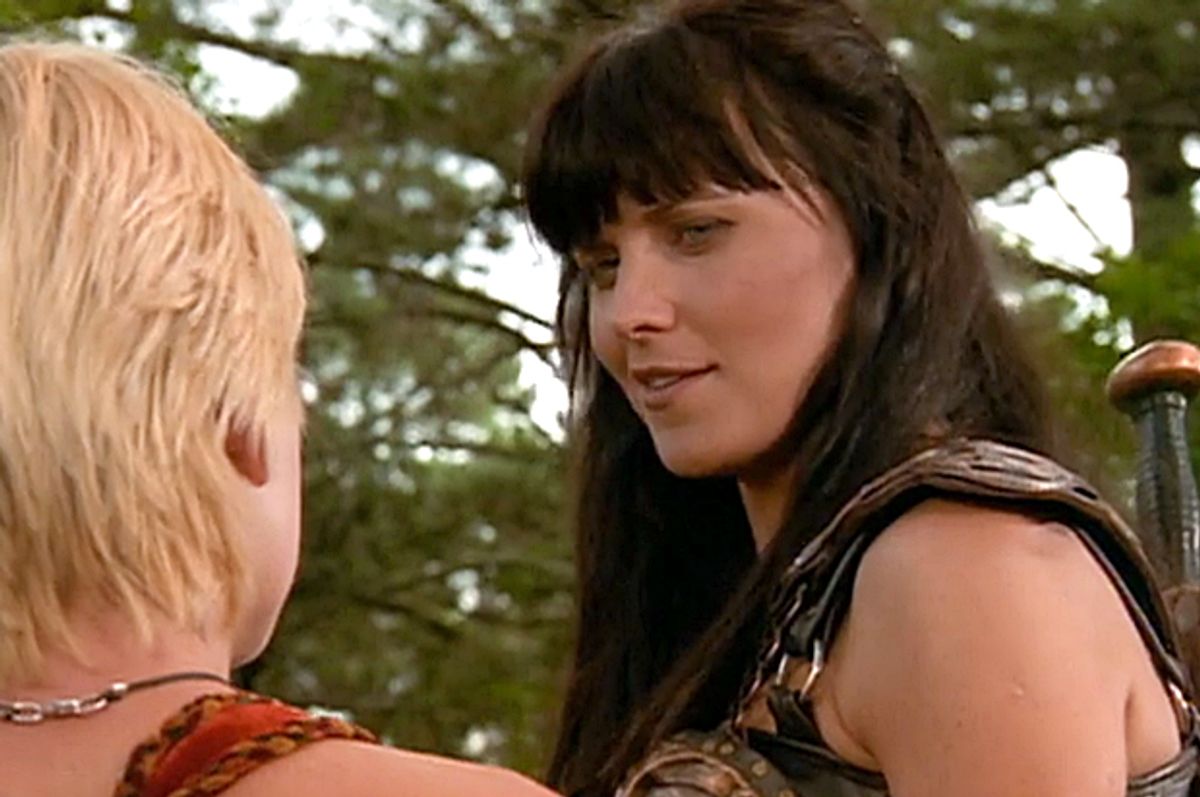 For almost anyone who watched the iconic "Xena: Warrior Princess" during its late Nineties-era run, the idea that Xena and her young comrade Gabrielle were more than buddies registers mostly as a big fat "no kidding." But while the original series got by for years on its sly — and much-loved — subtext, a new reboot leaves no room for doubt. We had to go two decades into the future from where we started, but we've finally got a mythological ancient world with gay people.

Last year NBC gave the go-ahead for a pilot for a new "Xena" from Javier Grillo-Marxuach, the writer and producer behind "The 100." And just to make things clear from the outset, during a recent Q&A on Tumblr, he promised, "There is no reason to bring back Xena if it is not there for the purpose of fully exploring a relationship that could only be shown subtextually in first-run syndication in the 1990s."  To which many of us can only reply, whoo hoo!

In much the same way that many of us, now a generation older and parents, enjoy it when Pixar or the like throws us the bone of a grownup joke or reference in our kid fare, there was a time when watching the original "Xena's" obvious but never directly stated gay plot felt like being in on a secret. A secret no one had gone to great lengths to conceal, granted, but a secret nonetheless. And there was a degree of fun in that, of seeing the show deftly navigate working on two levels.

Fans, meanwhile, loved it, loved it as the delicious little morsel of LGBT representation it was. Remember, when "Xena" debuted, it was only one year after "Roseanne" had boldly and controversially aired a same-sex kiss — albeit one that mostly depicted the back Mariel Hemingway's head. This was a time when the peak lesbian visibility on prime time television was Ross's ex-wife Carol on "Friends." (And the fact that his wife had left him for a woman was still a source of mirth.) We didn't have a "Buffy the Vampire Slayer" — let alone the brilliant early 2000s coming out arc of Willow Rosenberg. We didn't even have a "Will & Grace" yet. And Ellen was two years away from her simple yet at the time revelatory declaration that "Yep, I'm gay" and playing it straight on her self-titled sitcom.

And not even that long ago, things were still very different. My teen has recently been binge watching here way through all of "Ugly Betty" — a show that ended its run just six years ago — and it's gratifying to see how dated it already seems. It was an undeniably sharp, funny show and a breakthrough for diverse representation at the time, but its starring gay male characters were broadly drawn, and its trans female character — Alexis — was played by Rebecca Romijn and regularly referred to in terms of when she "was a man." If you'd have told me, even five years ago, we'd have a Golden Globe-winning TV show that featured a showstopping original musical number entitled "Getting Bi," I frankly might have been skeptical.

In an interview with Lesbian News in 2003, Lucy Lawless said of Xena's relationship with Gabrielle, "It wasn't just that Xena was bisexual and kinda like her gal pal and they kind of fooled around sometimes, it was "Nope, they're married, man." And speaking with After Ellen eight years ago, actress Renee O’Connor, who played Gabrielle, said that "It was very clear that we were together. They are so in love with each other, they love each other so dearly; there’s no way you can say that’s not true. Anyone can see that from watching the show." But when asked if she thought the relationship would be more clearly defined if the show were to be remade in 2008, she said, "I don’t know. Maybe there’s a little bit more hint of acceptance today. Maybe, maybe not. You can only put it up and see what would happen." It's taken time, but how tremendous, now, to not have to wonder, to not have to maybe. Whether the pilot progresses to a full series is still yet to be seen, but this new Xena's status — as the hero we always knew she was — is already clear.