The SeaWorld sea change: Will the marine park's about-face signal a shift in how we think about animal captivity?

America's biggest "oceanarium" surrenders to its critics and abandons captive orca breeding. Will zoos be next? 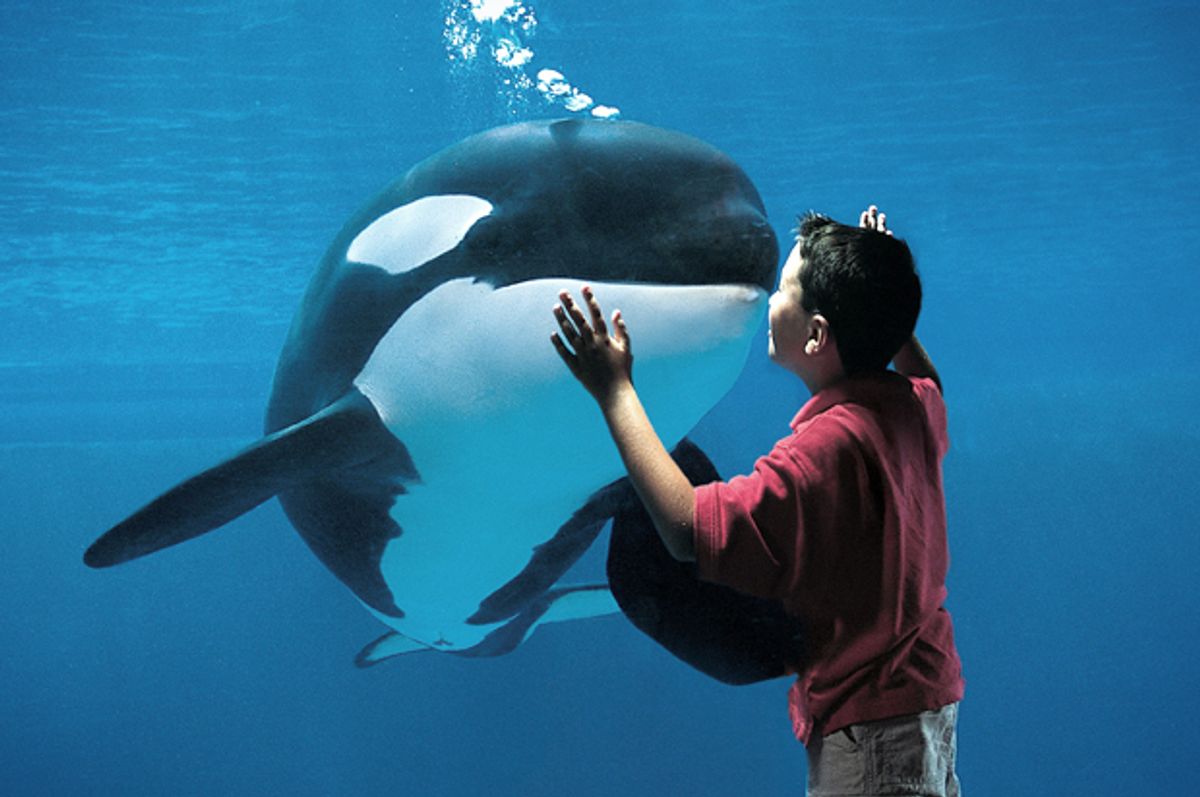 I visited SeaWorld in San Diego as a kid; I loved it. Of course, I also remember loving Orky and Corky, the performing orcas at Marineland of the Pacific, SeaWorld’s less prestigious competitor in Los Angeles. From the standpoint of the 21st century, that park — once featured in an episode of “I Love Lucy” — was no doubt a dreadful place. (Marineland disappeared abruptly in 1987, after SeaWorld bought the whole operation and trucked out the animals in the middle of the night. Some of its structures sat moldering on the L.A. waterfront for almost 20 years.) Entirely too much of the pop-culture economy is built around the concept of “stuff kids love”; we ought to understand by now that ethical or healthful behavior demands something more than that.

Like a whole bunch of middle-class American parents, and like pretty much everyone who saw the documentary “Blackfish” — which explored the 2010 death of a SeaWorld orca trainer named Dawn Brancheau, and a long history of alleged mistreatment of captive killer whales at SeaWorld and elsewhere — I wouldn’t take my kids to any of those places today. That feeling is certainly not universal; almost 6.5 million people attended SeaWorld’s three “oceanarium” parks in the second quarter of 2015, down only slightly from the previous year. But the effect of director Gabriela Cowperthwaite’s film and investigative journalist David Kirby’s 2012 book “Death at SeaWorld” (one of the film’s primary sources) on both SeaWorld’s public image and on how we think about captive marine mammals has been enormous.

This week the SeaWorld story culminated in the company’s announcement that it will no longer breed orcas in captivity, essentially abandoning its longtime business model in the face of an enormous shift in public perception. That’s a testament to the enduring power of activist media, even in an era when it often seems impossible to attract attention to serious issues amid the rising tide of meaningless effluvia. But the true causes and true consequences of the SeaWorld shift extend well beyond marine amusement parks and charismatic species like killer whales. We are beginning to think differently about the relationship between our species and other species, and to move beyond the longstanding assumption that we hold dominion over the natural world and are free to keep animals captive for our entertainment, or for any reason we like. Will future generations look back on zoos, circuses, racetracks and marine parks the way most of us now view bear-baiting and dogfights?

At first SeaWorld responded to “Blackfish” as all corporations do when faced with public disclosure of widespread malfeasance: It fought back, sought to change the subject and muddy the waters (ha ha), and made a series of far-reaching counter-allegations based on misleading half-truths or outright falsehoods. As David Kirby has said, it was among “the clumsiest, most ill-advised acts of corporate crisis management” since New Coke. And then, after making the situation markedly worse for itself instead of better, SeaWorld pretty much capitulated. In a series of decisions that Cowperthwaite calls “paradigm-shifting,” SeaWorld first announced last fall that it would end its “theatrical shows” featuring orcas, and then fired a bunch of its executives last month, after admitting that management had ordered employees to infiltrate animal-rights groups. This week’s announcement that SeaWorld would no longer breed killer whales in captivity was the capstone. As the 23 orcas who now live in SeaWorld’s parks die off, they will not be replaced.

Companies do not abandon a business model that was immensely profitable for decades out of the goodness of their hearts. Killer whales performing amusing tricks, and soaking the first 20 rows of kids with seawater, was pretty much the SeaWorld brand. That brand is being dumped, or at least radically altered, out of dire financial necessity, and because the paradigm shift Cowperthwaite mentions has already happened in the hearts and minds of the public. Since “Blackfish” was broadcast on CNN in the fall of 2013 (followed by an Anderson Cooper special), SeaWorld’s stock price has collapsed, sparking a class action suit by shareholders. Net income was down more than 80 percent in 2015. SeaWorld has lost numerous corporate partners and sponsors; scenes set at the company’s parks have been written out of at least two major Hollywood movies, including Pixar’s upcoming aquatic odyssey “Finding Dory.”

In a sign of what we might call SeaWorld’s conditional surrender, the press release announcing an end to the captive breeding program was jointly issued by CEO Joel Manby, the Humane Society of the United States and Cowperthwaite, the director of “Blackfish.” Perhaps not coincidentally, SeaWorld has pledged to donate $50 million to the Humane Society’s campaign against illegal whaling and seal hunting over the next five years. More radical animal-rights activists, like PETA head Mimi Bekhechi, have not signed onto this deal, and are now urging SeaWorld to transfer its orcas to open-ocean enclosures where they can have “some semblance of a life outside these prison tanks.” (No one believes that whales raised in captivity would be likely to survive if released into the wild.)

As even Bekhechi would agree, the fate of SeaWorld’s last two dozen killer whales, pathological and psychotic as they well may be, is a footnote to the larger ethical and moral issues here. In effect, SeaWorld has done an ideological about-face, and now agrees with its most ardent critics that it’s not OK to keep these magnificent animals in artificial environments for our entertainment, no matter what excuses are offered about conservation and education. So why doesn’t the venerable San Diego Zoo, a few miles away, feel the same way about its lions and tigers and bears and exotic animals from all over the globe?

It’s an entirely serious question, with no obvious answer. Where exactly is the dividing line between the animals we can imprison without guilt for our amusement and those we can’t? Epistemologically speaking, why is a whale different from a gorilla or a giraffe or one of those adorable little harvest mice my daughter used to watch for hours in the Mouse House at the Bronx Zoo? For the record, I would agree that the adorable mouse is different: It’s much easier to care for and isn’t likely to injure anyone, and it gives no obvious sign of knowing or caring that it lives in an unnatural environment. But I’m not convinced those are the right criteria in any general sense, or that I’m equipped to make those decisions on a grand scale. Much bigger questions are at stake here, such as what it means to be human and what it means to be an animal, and how we understand the relationship between those categories.

This has been a long, slow evolutionary process, but there’s no doubt it has accelerated dramatically in the age of media activism and environmental catastrophe. Our growing sense that the natural world has obvious limits, and in many places faces imminent destruction, is clearly linked to our growing sense of ethical responsibility toward animals, and the revolutionary idea that they may possess their own version of the “inalienable rights” so memorably laid out by Thomas Jefferson.

Zoos like the big reputable ones I just mentioned have long since rebranded themselves as nonprofit institutions aimed at conservation, education and species preservation. There’s no reason to doubt the sincerity and dedication of the people who work at those places, and in some cases captivity may be the final refuge for a wild species facing extinction. But that offers no escape from the central conundrum behind the zoo as an institution, whose lineage clearly extends back to the blood-sport royal menageries of the ancient world and the infamous collection of wild animals maintained by King Henry III in the Tower of London. (When it was opened to the public some years later, you could save on the admission price by bringing a cat or dog to feed to the lions.)

Big metropolitan zoos with their pious exhibits about habitat diversity and their interactive Dora the Explorer displays are eager to assure us that they are nothing like SeaWorld. They have no kinship with the hundreds or thousands of unlicensed or unaccredited roadside zoos around the world where tiger cubs are tortured for photo-ops and injured or deranged animals languish in concrete pits. (If you were scarred by the Central Park Zoo in the early ‘80s, as I was, you know how recently such things existed in American cities.) They have no connection to the ugly heritage of cockfighting and dog-fighting and bear-baiting, that favored sport of Queen Elizabeth which is still known to occur in such ass-backward parts of the world as the tribal regions of Pakistan and Spartanburg, South Carolina. (That famous stage direction from Shakespeare’s “A Winter’s Tale” — “Exit, pursued by a bear” — may have been meant to invoke an actual bear.)

It wasn’t as if the Elizabethans and every other premodern civilization that enjoyed watching animals and/or humans kill each other in public didn’t understand that such things were cruel. They weren’t actually stupider than we are just because they didn’t have Comedy Central. As Friedrich Nietzsche enjoyed telling his horrified 19th-century readers, the ancient world often understood cruelty as a virtue, or at least as an inescapable and instructive fact of life. In our own era we have turned that philosophical problem upside down: With the notable exception of Donald Trump (I’m going to resist that tangent, I swear), we now claim that we’re opposed to cruelty or that we have transcended it.

Maybe that’s true and maybe it isn’t; I would say the evidence is mixed. Queens don’t routinely visit bear gardens these days, and the gladiatorial combat seen in reality TV does not typically end in death. We are clearly more aware of cruelty as a problem, and more conflicted about it. Even the most articulate defenses of zoos and aquariums, like this utilitarian argument by Michael Hutchins, begin by conceding that it’s morally unacceptable to imprison animals for our entertainment, and that the animals in question would be better off in the wild. (In other words, the San Diego Zoo's best argument is that it's less cruel than other zoos, and that its public benefits outweigh its immoral actions.) What the SeaWorld case tells us is that we remain willing to ignore cruelty, and to accept all kinds of flimsy excuses for it, until it is laid bare before us. That moment of confrontation is coming for the entire captive-animal industry, and sooner than we think.