The rise of the Brussels hawks: Everybody is terrified of Donald Trump, but why aren't they worried about Hillary Clinton too? 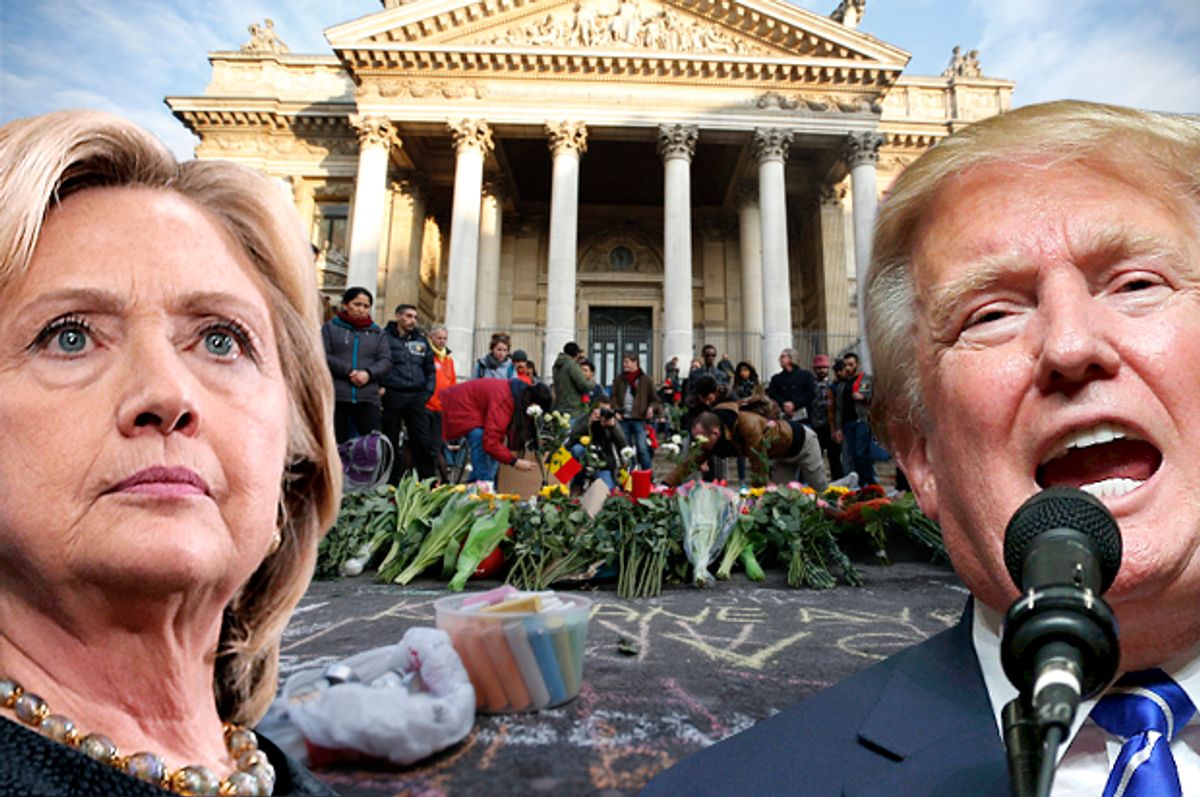 Yesterday's attacks in Brussels obviously reflect the fact that ISIS is an apocalyptic death cult that treats human lives of all races and creeds as cheap currency to be cashed in at the alter of a twisted theology. But it’s also a reminder that the War on Terror, which the invasions of Afghanistan and Iraq inaugurated, has set the world on fire. The bloodshed unleashed abroad continues to ricochet back home, inciting reactionaries on both sides who seek to define the world in starkly Manichaean terms: You’re either with us or against us; they either submit to the caliphate, or aid the crusaders.

These reactionaries use social media to communicate directly with supporters while the traditional media, unwittingly or otherwise, amplify their message of fear and hate. While ISIS’s claim of responsibility took a few hours to surface, the American and European far right were quick to exploit the tragedy to fuel the very inferno that sparked the attack.

Ted Cruz, embracing Twitter’s incantatory powers, tweeted, “We will name our enemy -- radical Islamic terrorism. And we will defeat it.” He also went a step further, calling for the country to “empower law enforcement to patrol and secure Muslim neighborhoods before they become radicalized.” Donald Trump used the attack, which have very well may have been carried out not by migrants but by marginalized and disaffected Europeans, to bolster his call to close our borders to Muslims, refugees or otherwise.

The attacks will no doubt benefit the far right. But, as the Washington Post’s Greg Sargent astutely pointed out, the conventional wisdom that they will help Trump in November “rest on the assumption that the general election audience will acquiesce to Trump’s simplistic, blustery framing of foreign policy and national security issues.

"While it’s true that Trump’s support among GOP primary voters did grow after previous terror attacks," Sargent continues, "my suspicion is that general election voters will be less inclined to buy into the overall story Trump is telling.”

In reality, the benefits very well may accrue to Hillary Clinton, who this morning bravely declaimed that shutting down borders was a bad idea because it was “unrealistic” and that we shouldn’t torture because it “is not effective.” Every single Trump flirtation with fascism and white supremacy makes her look more like a sensible moderate. Yet she is neither.

Earlier this week, at the American Israel Public Affairs Committee conference, Clinton showed her true militarist colors, pledging to confront Iran with “real consequences for even the smallest violations” of the nuclear accord, and condemning Trump for his quickly discarded pledge to being a neutral arbiter on Israel-Palestine. “We need steady hands, not a president who says he’s neutral on Monday, pro-Israel on Tuesday, and who knows what on Wednesday, because everything is negotiable,” Clinton said.

Writers who spend a lot of their time making the specious case that Hillary Clinton is a progressive tend to focus their attention on everyday Internet trolls who may or may not support Bernie Sanders, or contending that the democratic socialist’s poor showing with older black voters is some sort of indictment of democratic socialism’s racial politics. Now, after months being dazzled by Clinton’s purported intersectionality, the candidate offers a pointed reminder that her foreign policy instincts intersect quite agreeably with the likes of neoconservative Robert Kagan. He's with her.

Clinton, sensing that she has the nomination sewn up, was honest about one of the few issues on which she has to be honest. The bankers who have paid her so handsomely for her advice can deal with a bit of campaign trail populism. AIPAC cannot. They expect her to toe the line. And boy did she ever.

The fog of war is no doubt clouding people’s minds. But making dumb decisions is not the sole prerogative of Trump voters. It’s worth remembering that the United States didn’t need Trump to invade two countries, and that the European establishment was at the helm while an estimated 3,770 refugees, many fleeing ISIS, died in the Mediterranean last year. This ongoing violence is inhuman and must stop. The so-called moderates are nothing of the sort. They can only promise to make everything worse.