"I was a hope-I-die-before-I-get-old kind of guy": Bob Mould opens up about his career's third act, writing through loss and the presidential election "circus"

Salon talks to the music veteran about his new album out Friday, life in San Francisco and his 37-year music career 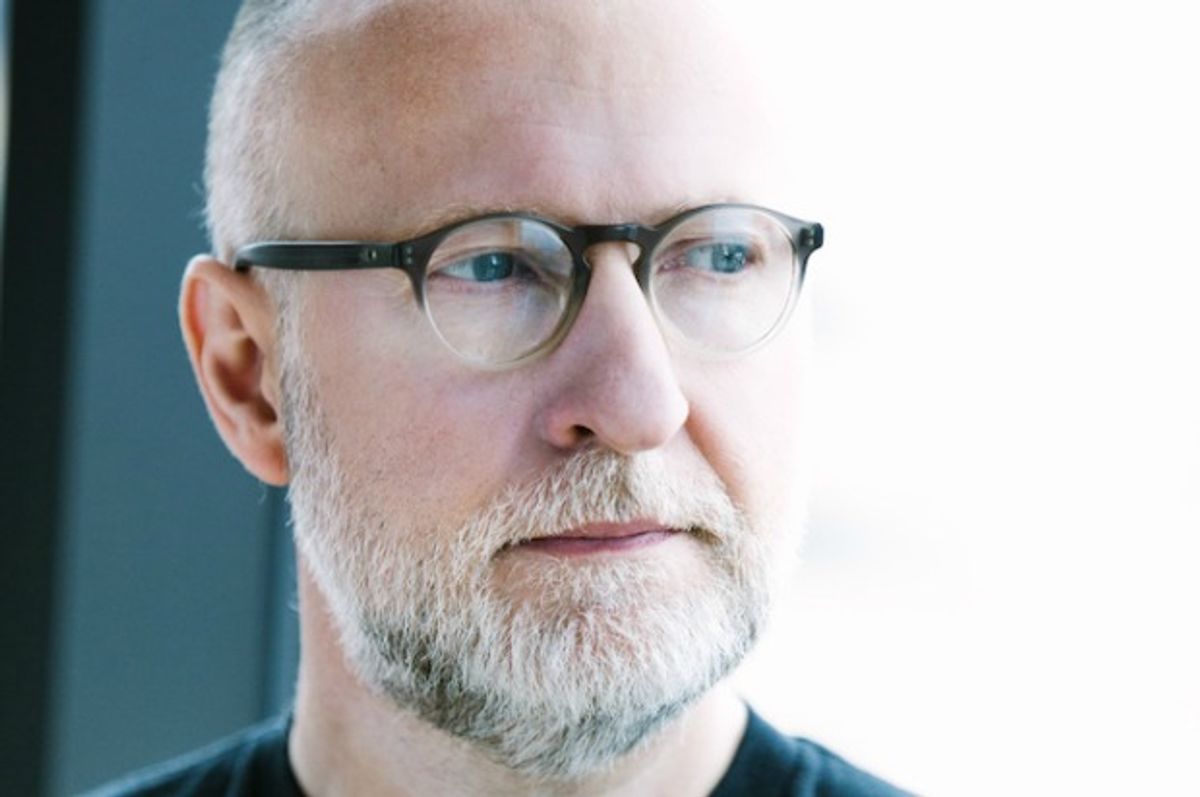 It’s not as if Bob Mould has spent much time coasting: The veteran punk rocker has released new music at a steady clip since his influential Minneapolis trio Hüsker Dü debuted with the “Land Speed Record” EP in 1982. Yet despite amassing an enviable catalog in a career stretching more than three and a half decades, Mould seemed to spring out of nowhere in 2012 with “Silver Age,” an album blending the full-throttle ferocity of Hüsker Dü with the barbed melodicism of Sugar, Mould’s early-’90s power pop band.

After an equally riotous follow-up on 2014’s “Beauty & Ruin,” Mould is back with “Patch the Sky.” Again featuring Jon Wurster on drums and Jason Narducy on bass, the new album is of a piece with the two before it, cementing what feels like a comeback for a musician who has never really been gone.

Mould has taken detours, to be sure. “Workbook,” his 1989 solo debut following Hüsker Dü’s split, owes as much to folk as punk, and he explored electronic music thoroughly enough to co-host a regular dance party called Blowoff when he lived in Washington, D.C., in the 2000s — to say nothing of his stint writing story lines for World Championship Wrestling in the ’90s, or penning the theme song for “The Daily Show.”

The ongoing rediscovery of Mould started in 2011, the year before “Silver Age.” He contributed that year to Foo Fighters’ album “Wasting Light” and performed with them occasionally onstage, published the memoir “See a Little Light: The Trail of Rage and Melody,” and was feted at a tribute concert in his honor at Walt Disney Concert Hall in Los Angeles, where Dave Grohl, Ryan Adams and members of Spoon, the Hold Steady and No Age performed his songs.

“I never saw that show coming, people I’ve influenced singing my words back to me,” Mould says now, still marveling at the idea.

The singer and guitarist reflected with Salon on his recent renaissance, and weighed in on politics, his current relationship with electronic music and how living in San Francisco is making him soft.

Your recent albums have been described as a “third-act resurgence.” Is that how you see it?

Once it was put in those words on my behalf, I guess I would tend to agree. I just sort of go from one to the next and I don’t notice where the parentheticals fit as I’m actually doing it. But I think that’s fair. It’s the third album with the same lineup and the same engineer and a similar tone and style in a general sense. I think there are big differences between the records, but yeah, I guess it feels like part three of a third act.

How does “Patch the Sky” fit together with “Silver Age” and “Beauty & Ruin?”

If we go back to the events that got me to “Silver Age,” that being the writing of the book, work with the Foo Fighters, the book coming out, more work with Foo Fighters and the Disney Hall show, “Silver Age” was written with energy and love, and it had a brighter tone to it. “Beauty & Ruin,” same lineup after a lot of touring, after losing my dad, just changes that were going on. I thought it was a little darker record, but I thought it showcased how the three of us made music together. With this record, more loss. A little more isolated in the writing. Totally isolated in the writing, actually, so it’s a little more introspective.

You said at the time that “Silver Age” was sort of a bookend to Sugar’s 1992 album “Copper Blue.” Is there a similar corollary for “Patch the Sky”?

“Black Sheets of Rain.” [Laughs] If there’s anything that it could resemble, I think it’s that record [Mould’s soul-baring second solo LP, released in 1990]. If any decade informed this record musically, it would probably be mid- to late-’70s and not punk rock.

Were you listening to particular bands from that era?

No, no, it just came out. Started popping out. It was like, what the hell, what is this, “Toys in the Attic”? [Laughs]

What was isolated about the writing process for “Patch the Sky”?

With “Silver Age,” I had some songs kicking around, but just all that compact energy. I wrote most of that record in a month, month and a half, right before we recorded it, and I felt like it was more of a spontaneous statement. “Beauty & Ruin” was a lot of ideas gathered on the run, and we went in to make that record right after we got back from South America. This record, I had a solid six months of writing, so in terms of process, it was probably closest to “Workbook.” Having six months of alone time is not necessarily the healthiest thing, but you get good work out of it.

What makes the new album so introspective?

I just had a lot of loss. I lost my mom, I lost a lot of friends, people got sick. It’s just the stuff that happens as you get older. It’s never fun. People leave, you mourn the loss and then you have to move on. Sometimes it happens quicker than others, and this time, I just wanted to sit and process it for a while.

Punk rock has always been a very personal means of expression for you, though you spoke out against the proposed same-sex marriage ban in North Carolina a few years ago. How much of a political component is there in your work?

Big politics, what can you do? You can speak your mind, and then you move on. To me, it’s more about going to my neighborhood association meetings to try to keep people from building giant, oversized ugly houses in my little neighborhood. Or trying to speak to the police in my neighborhood about crime. Big-stage politics, I’m not so good at that. But same-sex marriage, that was something that needed a light shined on it. That’s a human rights issue, and one that I take personally, whether or not I want to get married.

How much attention have you been paying attention to the presidential primaries?

Too much. What a circus.

Is it something your work will reflect?

I’m sure it’s affecting my mind-set, so I’m sure somehow it’s going to get in there. I think the most important thing I could do, or anyone could do, is you have to vote. It’s that simple. Why is voting not mandatory in this country?

What do you make of it all?

I think it’s good to shine a very bright light on the crazy. I think some of these ideas that people are stealing have been couched and disguised and sometimes hidden away for sometimes decades, and now that we’re in the last gasp of that political party, it’s all on display. Now the hope is that people will see what they’ve been doing and see how the system is failing all of us. Hopefully we’ll get some good change out of this.

Are you supporting a particular candidate?

I haven’t picked yet, but I know who I’m not voting for.

As far as local politics go, you live in San Francisco, where tech workers have become a sometimes unwelcome presence. How much do you feel the effects of that?

I don’t get inside that beehive directly. A lot of acquaintances work in that business. I don’t know. Cities change. San Francisco is such a beautiful place. It’s a city with a rich history in music and culture and arts and lifestyle, and I don’t know how many people who have showed up in the last three years are aware of it, or care about it. It’s a tough deal. People can’t afford to live there, it’s really hard.

You’ve moved around a lot. How much are you influenced by the places you live?

New York, I was always on my feet, always walking, always thinking on my feet. That was a big part of it to me, the way the ideas were constructed. I think Minneapolis and Austin were direct opposites. In Minnesota, you stayed in all winter, and in Austin you stayed in all summer. The weather has a lot to do with it. D.C., it was crazy being there during the George W. Bush years. The pulse of the city was just war, war, war, just people with pacemakers running wars. It was like, what the fuck? San Francisco, I’d been going there since ’81. I love the soft weather. It’s making me soft. The one thing that I feel in my six and a half years, my memories are weird because there are no weird seasons to speak of, other than fog. It has a little bit of that affect, where those potential markers due to weather don’t really exist.

How does that come out in your work?

I don’t know if I can specifically pin it down. I’m aware of what it does to me as a person. Because I don’t work in tech, San Francisco to me is pretty chill. It feels very, very different than the East Coast. For this record, I pretty much sat in my room and worked. Sometimes I wasn’t even aware of when the fog came or went. [Laughs.]

Now that you’re in this third-act resurgence, what’s your relationship these days with electronic music?

I put it pretty much on hold. I’ll put on a compilation from a label that I like and listen to what people are doing with progressive house or French house, but as an active hours-a-day-looking-for-new-music guy, I’m done with it for now. It got kind of overblown. I just felt like that genre had gotten filled with the same drops and the same zooooom, and that was it. I just needed a break. I’ll probably go back to DJing at some point, but the 11 years of Blowoff was a full-on immersion. In the gay community at that time, the music wasn’t really top-notch, and it felt like we were bringing something different, and I know we were good at it.

What do you think about your own influence?

I think it’s there. I don’t know how big or small it is. I can’t tell. I feel like I’m really important to a small group of people, and that’s great. If they get the stories and can relate to them, that’s really what this is about. On a global level, I don’t know. I really have no idea. I’m close to it, so I’m not really sure. I’m grateful that people like the early work, the middle work, the recent work. I think it all fits together in a cool way, there’s a consistency to all of it. I think after 37 years of it, I know what I’m good at, I know what people want to hear from me.

So back 37 years ago, what did you think you’d be doing today?

Hoping I would do this, but in what form, I didn’t know. I was a hope-I-die-before-I-get-old kind of guy. Punk rock was crazy. We were just building stages and asking our friends to come play with us. And I was bored, and I needed to do it or perish. There was no idea that we’d be carrying on about it at this point, but I’m very grateful that we are, of course. It’s pretty great. I love my work, I love doing what we do. It gets harder as I get older, of course, but I’ll keep doing it as long as it lasts.