"Batman v. Superman" isn't a flop: A superhero movie that questions absolute power is tailor-made for 2016 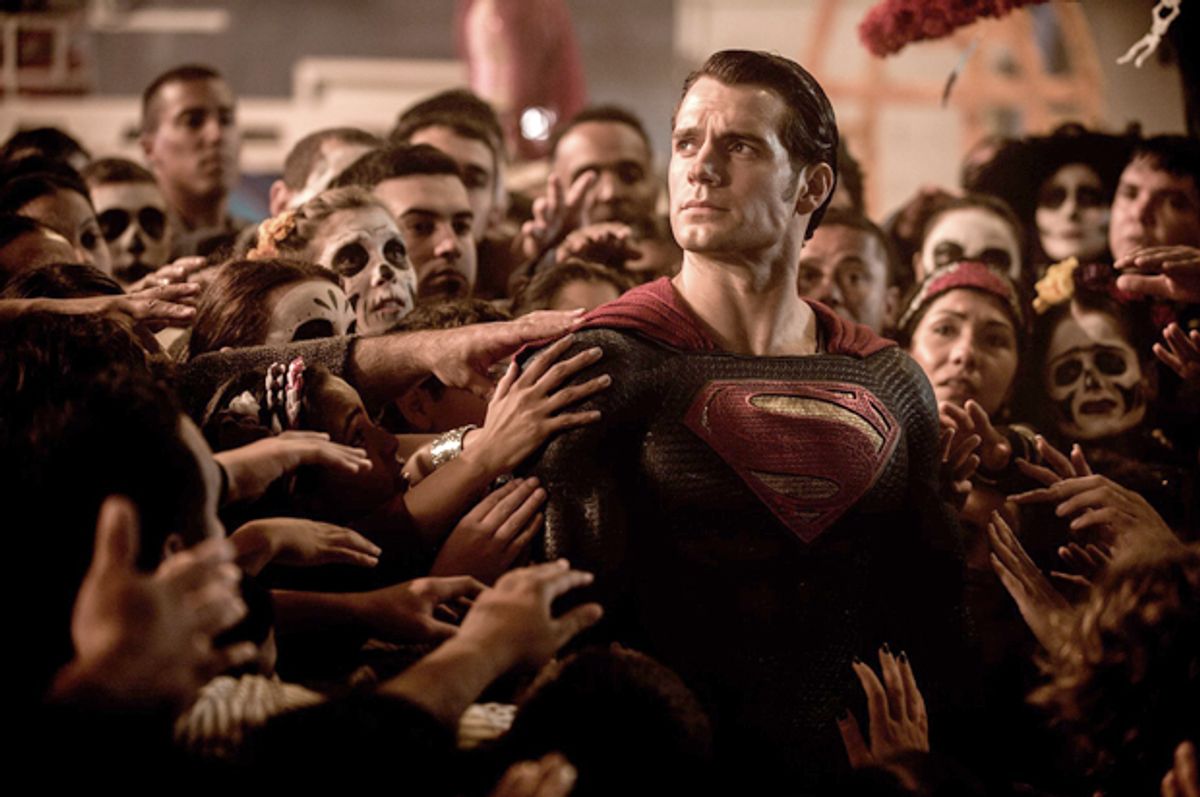 The reviews are in for "Batman v. Superman: Dawn of Justice"… and they aren't good. It currently scores a 29 percent on Rotten Tomatoes and a 44 on Metacritic, with the general consensus being that it has a muddled and confusing plot, an over-reliance on special effects, and so many characters that it's hard to feel emotionally invested in anything that happens on screen.

Yet despite this critical shellacking, "Batman v. Superman" is arguably resonating with audiences (emphasis on the word "arguably"). Certainly its record-breaking $166.1 million opening weekend indicates widespread interest and positive word-of-mouth, although its relatively low Cinemascore of B – on par with duds like "Catwoman" and "The Green Lantern" – suggests this initial enthusiasm may eventually cool into a tepid response.

Nevertheless, if we're going to understand why "Batman v. Superman" has been so successful among moviegoers (at least thus far) despite the overwhelmingly negative critical response, it is necessary to examine the movie's political message – or, more precisely, how that message has shaped audience perception of the film.

First, a word about the screening I attended, which fortunately for me had an audience which didn't hesitate to loudly proclaim its opinions. When Superman complained to his mother that humans weren't appreciating his services, someone behind me sarcastically muttered "Oh boo hoo." Later on, when an anti-Superman protester spray painted "False God" on a statue of the titular hero, an elderly gentleman a few seats to my left muttered "Yep" and audibly gasped when the vandal was charged with terrorism and a hate crime. During a fight scene between Batman and Superman, a friend who joined me at the screening whispered, "How can Batman be a good guy? Everything he's doing is motivated by hate." Finally, as I left the theater, a little boy asked his mother who he was supposed to root for, since "both of them weren't very nice at all."

In short, this was an audience that didn't just enjoy the film as an action-packed spectacle, but genuinely picked up on and appreciated its attempts at conveying deeper themes. Some may have loved the movie and others may have hated it, but there is no question that all of them (or at least the vocal ones) had strong reactions to its political subtext.

Yet what exactly was that subtext? If the critics are to believed, "Batman v. Superman" is only so much sound and fury signifying nothing. Alex Abad-Santos of Vox denounced it as "a stupidly beautiful, hollow movie," Salon's own Andrew O'Hehir wrote that Snyder "seems kinda dumb," Adam Howard of MSNBC reassured fans that "a Trojan horse for fascism, it is not," and Alyssa Rosenberg of "The Washington Post" insisted that "I'm all for looking for meaning in blockbuster movies, but those films need to work a lot harder than 'Batman v. Superman' does to earn the right to our consideration." While most critics have commendably tried to play down accusations of a totalitarian or right-wing bias, they have generally done so by insisting that the film isn't deep enough to have a coherent philosophy at all – a slap in the face to Warner Bros. and DC executives who, ironically enough, expressed concern that "Batman v. Superman" would flop because it was "too smart" for general audiences.

Given its bombastic and overly self-serious tone, it's understandable that critics would be inclined to malign it, but their attitudes are a tad unfair. "Batman v. Superman" may lack the social commentary of "The Dark Knight" trilogy or bold iconoclasm of "V for Vendetta," but it does have an ideology – namely, its distrust of power. To Batman and many residents of both Metropolis and Gotham, Superman is a self-appointed overlord whose complete unaccountability makes him an existential threat to humanity, regardless of his claims that he only wants to help. Indeed, the film opens by revisiting the controversial Metropolis fight from "Man of Steel," one that many critics noted would have resulted in hundreds of thousands of civilian casualties, showing how the stupendous loss of life (and Superman's callous disregard for it) motivates Batman's hatred. Of course, in Superman's eyes, Batman is nothing more than a vigilante, someone whose ability to operate above the law speaks not to his superior moral qualities but rather the corruption of a police department that refuses to prosecute him. And when we see Bruce Wayne branding criminals with the Bat logo, it's hard to disagree with Superman's assessment.

Coming from a movie in which one character declares that "on this earth, every act is a political act," it's obvious that these political messages were included by design. Regardless of their political affiliation, director Zack Snyder and screenwriters David S. Goyer and Chris Terrio have created an operatic superhero film that abhors the real-world consequences which would ensue if superheroes actually existed. In the "Batman v. Superman" paradigm, it doesn't matter that those wielding the power think of themselves as virtuous – whether sent from above with a divine destiny or crawling the streets to protect the innocent – because "in a democracy, good is a conversation, not a unilateral decision" (to quote the movie's idealistic United States Senator played by Holly Hunter).

This isn't to say that "Batman v. Superman" is a masterpiece of political commentary, or even that its message is always presented effectively. Aside from shots of anti-Superman protesters carrying protest signs modeled after the anti-Mexican rhetoric that contaminates our discourse today, there isn't much of an exploration of xenophobia vis-à-vis Superman's origin story (a missed opportunity in any ostensibly politicized Superman parable). There are similarly fleeting references to drone strikes and civil liberties violations, all dutifully ticked off as vestiges of a security state run amok before quickly forgotten. The movie does include commendably strong female characters like Lois Lane and Wonder Woman, but they receive such insufficient attention that they barely make an impact (a shortcoming more likely attributable to its cluttered narrative than outright sexism).

At the same time, there is actually something very intelligent, even subversive, about a superhero film that is so brazen in challenging the political legitimacy of those who would be superheroes. It is the central conflict that drives the narrative and keeps the audience engaged in the on-screen action, even if the flat characters make it hard to invest on a deeper level. This isn't a movie that simply includes those elements to make itself seem more profound; without that political subtext, the film barely exists at all.

While it remains to be seen whether this political message will give "Batman v. Superman" the same timelessness as other blockbuster political parables from the superhero genre (again, think "V for Vendetta" or "The Dark Knight"), I suspect it goes a long way toward explaining why many audiences are connecting with it. For better or worse, the movie uses two well-known contemporary mythologies – that of the Batman and Superman characters – to ask provocative questions about whether we can trust concentrations of great power. Critics may deride these attempts as incoherent or simplistic, but if John and Jane Q. Public are intrigued by them, then perhaps we should hesitate before dismissing them outright. After all, any movie that tries to make its audience smarter isn't completely devoid of merit.

When cultural historians look back on cinema circa 2016, they will likely marvel at our growing ambivalence toward the superhero characters who have become so popular over the past couple decades. Later this year "Batman v. Superman" will be joined by "Captain America: Civil War," another movie in which two iconic superheroes feud over ideological differences about concentrations of power (this time Captain America and Iron Man). There is a mass catharsis at play here, a phenomenon in which the anxieties toward demagogues and potential demagogues – liberals and conservatives can fill in their own blanks here with the names of their least-favorite politicians – are being reflected back to us on the silver screen.

This, politically speaking, may be the most important takeaway from "Batman v. Superman." It may be a good movie, a bad movie, or anything in between, but it is without question an important film today, and a quintessential product of the America we inhabit.